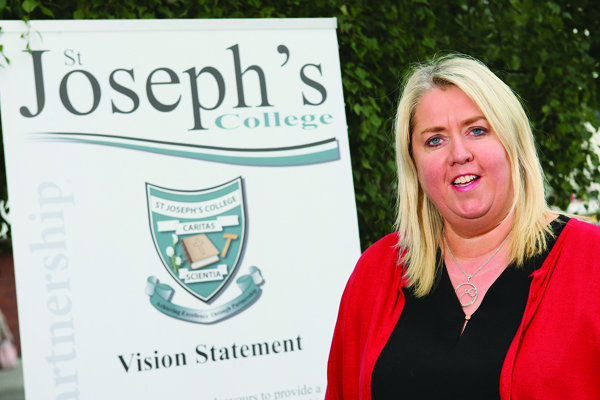 EDUCATIONALISTS and local community leaders have called for a new school building for St Joseph’s College.

Housed in the former St Monica’s Secondary School on the Ravenhill Road, local representatives believe stellar progress at the school is being hampered by its crumbling premises.

The school, which opened in 1992, is proud of its all-ability, Catholic ethos and its diverse student body, but many believe it is time the school got the 21st century facilities it deserves to keep up with its growing pupil numbers.

“St Joseph's’ exemplary inclusive approach is a source of pride for all in Belfast who value excellence in education,” she said.

"Under the leadership of principal Michele McCormick, the school is going from strength to strength but the commitment of governors, staff and indeed pupils is not matched by the resources it commands."

Physical education amenities at the school have come in for fierce criticism from parents who say the tarmacadam car park in front of the school which doubles as a play area is an indictment of the existing facilities. And the contrast with the spanking new facilities of its Catholic grammar school neighbour, Aquinas College, has raised questions about the priorities of education chiefs.

Principal Michele McCormick says the school’s results, particularly in Maths and English, are the best in Belfast in the non-selective sector.

In 2017, the school also won the Aisling Award for ‘Oustanding Achievement in Education’.

“St Joseph’s has a warm, welcoming ethos and they pride themselves on the care and compassion the staff have for pupils and their determination and passion to achieve the best possible success for every child,” added the Lord Mayor.
"St Joseph’s College is delivering a first-class, 21st century education to our young people. It’s time, therefore, that it was given the 21st century resources it needs to fully realise its mission.”

“Due to the many demands on the Department’s capital budget, when a call for proposals is made, all projects submitted by the Managing Authority are assessed under the Department’s protocol (which includes a gateway check to ensure there are no outstanding issues around the size or sustainability of the school or area planning uncertainties to determine which projects should proceed to planning based on priority need and the budget available at that time.

“Any school not announced must be selected through the formal ‘call for projects’ process if it is to become eligible for a new build. Given the medium term budget uncertainty and the absence of a Minister, there are currently no plans for a further major capital investment announcement.”