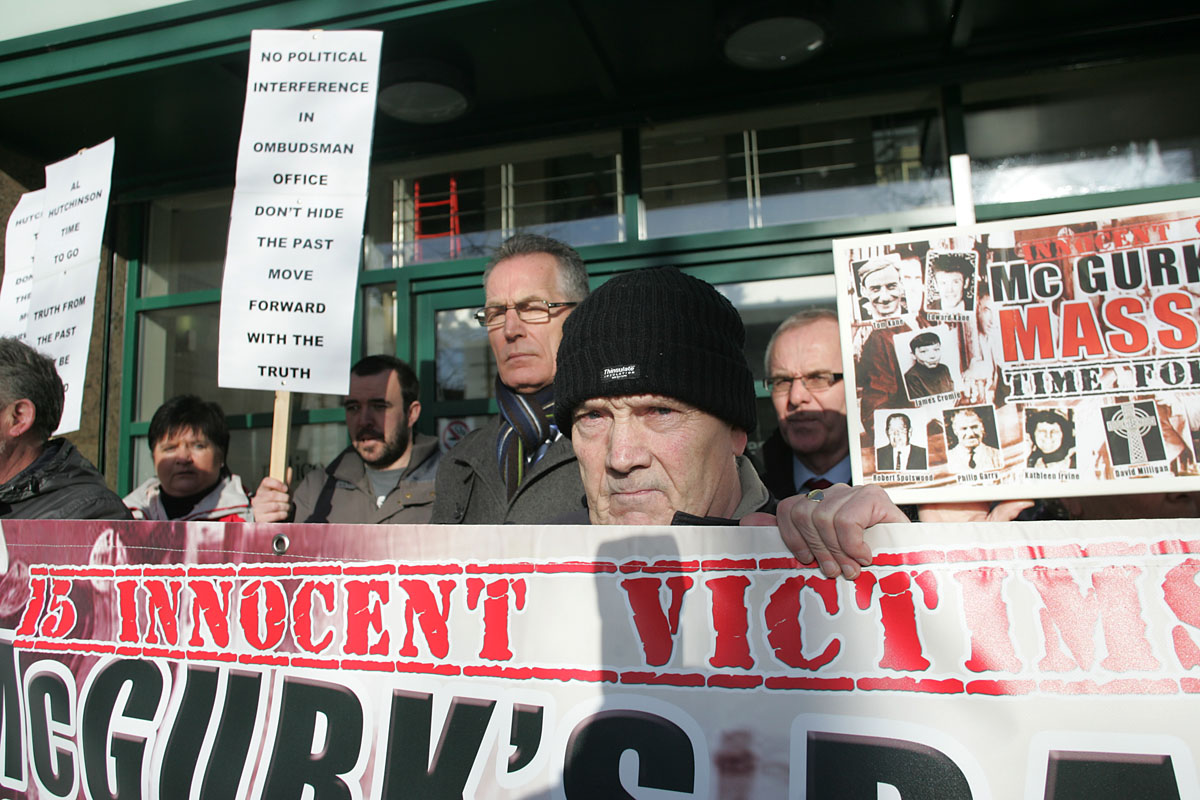 Relatives of the Ballymurphy Massacre have joined with other bereaved families seeking justice for their loved ones in calling for the immediate resignation of the Police Ombudsman Al Hutchinson.

Relatives of the McGurk’s Massacre and the Loughinisland Massacre were among the families who staged a protest outside the Ombudsman’s office yesterday (Wednesday).

The protest follows a BBC Spotlight programme screened on Tuesday night in which former Chief Executive of the Ombudsman’s office, Sam Pollock, said he had “lost all confidence in the direction of the Office and the independence of the Office in relation to very serious matters”.

In September the Criminal Justice Inspectorate released a damning report questioning Al Hutchinson’s independence and saying he had been “heavily influenced” by families and their legal teams, the PSNI and others.

Briege Voyle, whose mother was one of 11 people shot dead by the British army in Ballymurphy in 1971, said Al Hutchinson has lost all credibility.

“If this man has any scruples or dignity he will go,” she said. “His office needs a complete reshake and the British can’t keep sweeping everything under the carpet and expect us to sit here and accept it. We are entitled to our human rights.”

She said they were keen to show solidarity with other families who were awaiting reports from the Ombudsman’s office.

“We haven’t had any dealing with his office but that is not to say that we won’t further down the line. Our families never got a proper investigation when they were murdered but they deserve it. Here we are 40 years down the line and we are still trying to get justice for our loved ones.”

John Teggart, whose father was killed in the massacre, said it is clear to everyone that the office is not independent.

“Independence has gone so it is time for him to go,” he said.

Meanwhile, Relatives for Justice Director Mark Thompson has added his voice to the torrent of calls for Al Hutchinson to resign.

“There are clearly very distinct issues here: that of Al Hutchinson's lack of independent leadership, and worse, interference with key reports that criticise the police regarding historic cases whereby these have been, from the PSNI's and RUC's perspective, favourably re-written.

“Al Hutchinson needs to go and Relatives for Justice reiterates its call for him to immediately resign. It is not good enough that he continues to cling to power, further damaging the credibility of this vital office.

“This has caused great distress to many families who have engaged the office both before and during Mr Hutchinson's time there and these same families are now also asking questions about the complaints that they made concerning the murders of their loved ones which have not been progressed and which were effectively parked.

“There has always been political resistance by the NIO and unionists concerning historic cases involving collusion on the part of the RUC and recent reports have all pointed to political interference around controversial murders, collusion and the use of agents in murders.

“The comments of the former Chief Executive Sam Pollock to Spotlight add to those fears and for families raise  many more questions about their complaints. This is especially so concerning direct RUC killings which have not been properly or effectively investigated at all by this office.”