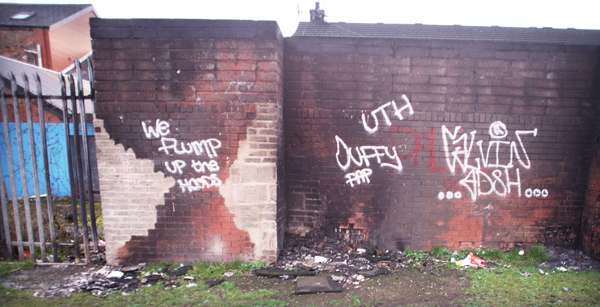 Damage at the back of Oldpark shops, where fires are regularly lit by gangs of young people

CHILDREN under the age of 10 were responsible for a horrific brick attack on a motorist that left her needing hospital treatment.

The attack was carried out in Rosapenna Street on Thursday by the young children at a time when local people are saying that anti-social behaviour in the Bone area is out of control.

The area where the attack was launched from is a notorious anti-social behaviour hot spot where so many fires have been lit that a local businessman has been told his boundary wall is about to collapse.

Michael Markey says he fears someone will be killed if something isn’t done to reign in the behaviour.

“We are talking young people who are responsible, primary school age, and it’s mostly girls. Someone will be killed if this keeps on,” he said.

Last month Bone taxi driver Stephen Short told the North Belfast News that lives were being put at risk by attacks like the one that damaged his taxi.

“I get embarrassed about it, being from the area,” he said. “I can hear customers mumbling in the back of the car commenting on the regularity of the Oldpark incidents and it hurts when you are from that area. On Saturday night, my vehicle was stoned. Another local taxi driver’s window was smashed with a stone and he had to pay £75 to get it fixed. It’s very dangerous as well as an object could break the window of a car and maybe hit a child or even kill someone. It’s becoming a regular occurrence now, week in, week out.”

A local father-of-four, who did not want to be identified, said he understood some of the kids were coming from outside areas.

“I live on the main road and last year a young girl was hit by a car because she was running back and forth in front of traffic,” he said. “I took the driver in because they were distraught. The wee girl was out of her head on drugs and it later turned out she was from the Cavehill Road.

“I’ve seen parents dropping young girls off here in cars. I can’t understand what these parents are thinking because I’d never let my kids do anything like that.”

He said he didn’t think there was enough for girls to do in the area.

“All the stuff they have planned for the young people seems to be for boys but girls are the problem here. They need something to do.”

Local SDLP Councillor Paul McCusker has leafleted the area about the ongoing anti-social behaviour issue and efforts are under way to address the problems.

A PSNI spokesman appealed for information on the brick attack on the motorist.

“Police would ask anyone who may have witnessed this incident to contact police on the non-emergency number 101, quoting reference 1002 29/12/16.