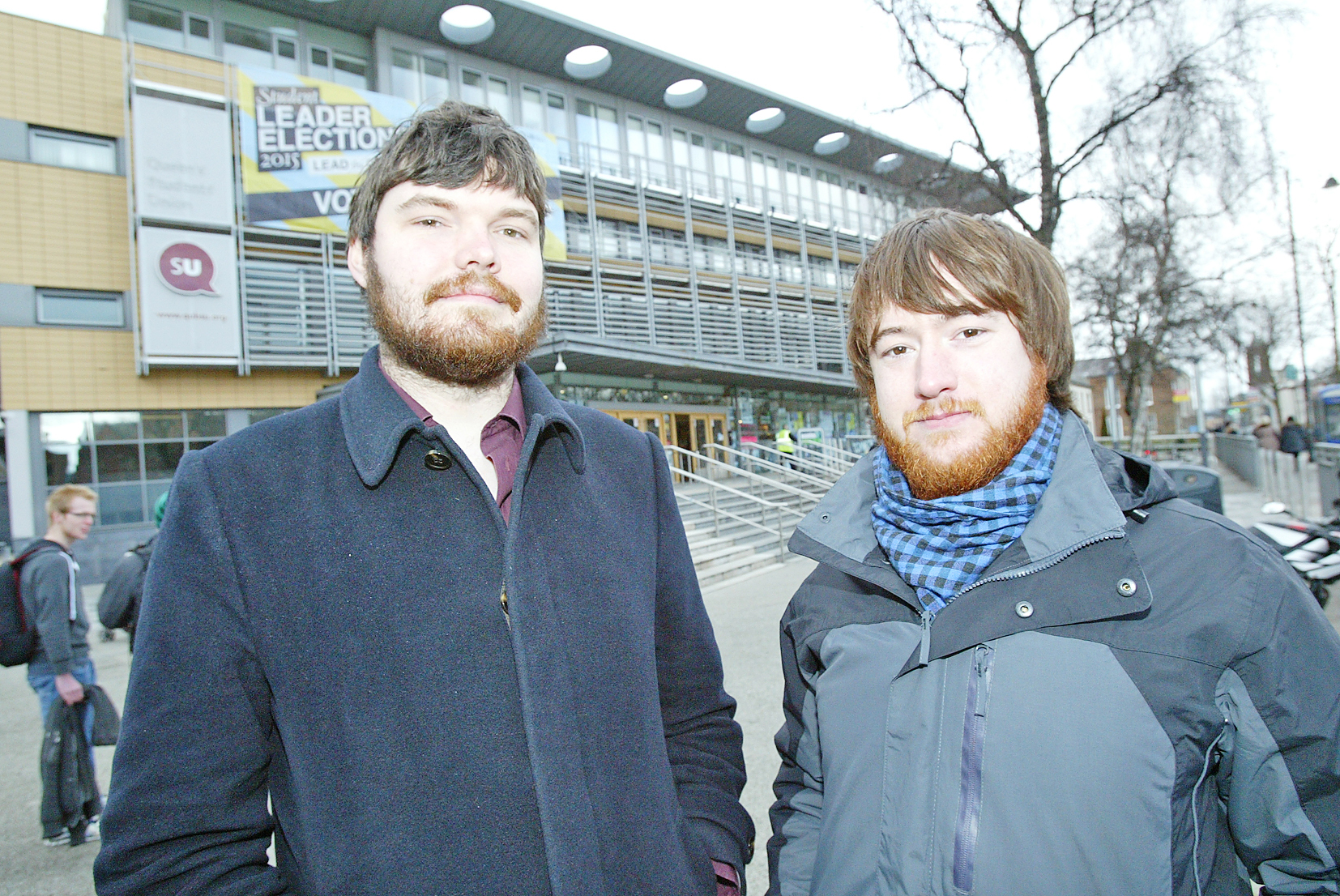 Ciaran Gallagher and Eóin Dawson, who'll be taking part in the student strike

STUDENTS at Queen’s University are to strike this month alongside public sector workers in opposition to recently announced austerity measures.

In a referendum, 86 per cent of the 954 students who voted backed a ‘Yes’ vote that called for the strike action as part of a “sustained campaign against cuts to university funding and austerity”.

The ‘student strike’ will take place on Friday March 13 to coincide with industrial action across the public sector in opposition to recent cuts in public spending as part of the Stormont House Agreement and the latest Assembly budget.

Trade unions argue that cuts to jobs and services will have a damaging impact on the most vulnerable and increase unemployment levels. Cuts to bus routes, special needs assistants in schools and the loss of thousands of public sector jobs are some of the cost-saving measures that have already been announced.

Stormont politicians maintain that their hands are tied by cuts to the block grant by the Treasury in London, that a specific hardship fund will cover the worst impact of welfare cuts and that devolved control over the rate of Corporation Tax will help boost the local economy in the long run.

Unions are currently balloting their members and Unison, the largest union in the North covering the health and education sector, has already announced that its membership has backed industrial action. Public transport, schools, hospitals and other public and community services could all be affected by the day of action.

Alongside the strikes a lunchtime demonstration in Belfast city centre has been called, with union organisers aiming to attract community campaigners, private sector workers and students to show their support.

Higher education has been hard hit with fears over cuts to university funding and student support. A proposal to raise local tuition fees in 2010 was blocked after student protests, and in recent years both QUB and UU have made redundancies and cut courses as part of cost-saving measures. Senior academics and policy commentators have voiced fear over a ‘brain drain’ as talented youngsters from the north travel overseas for study.

Second-year Social Work student and Socialist Youth member Eóin Dawson, who campaigned in favour of a ‘Yes’ vote in the referendum, said the response on campus to the campaign was “positive” and that “important links with the trade unions” are being forged.

“This referendum result is a reflection of the strong opposition that exists among students to cuts to education and the broader austerity agenda,” he said.

“Today is just the first step in a longer campaign. The next step is to get students actively involved in the day of action, protesting, marching and joining picket lines.”

He added: “What we want to see is an independent anti-austerity movement including students in opposition to these failed policies. We want an education system which is free, of the highest quality and funded by progressive taxation of the very wealthiest in society.”