Rags to riches but with a bitter twist 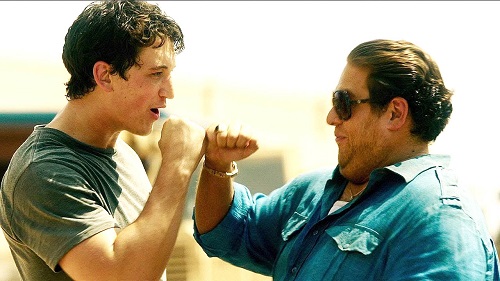 MILDLY AMUSING: War Dogs tells a true story that may seem hard to believe... but it’s not

Life is going nowhere for David Packouz (Miles Teller). Sure, he has a beautiful girlfriend who is expecting their first child, but David isn’t exactly raking the dollars in with his part-time job as a massage therapist, nor has his investment in luxury bed linen paid off. But David’s life gets a lot more interesting when he bumps into his old school friend Efraim Diveroli (Jonah Hill), a larger than life character who is hungry for success.

Seeing that his old buddy David is stuck in a bit of a rut, Efraim offers him a job with his guns and ammo business, and all the guys need to do is buy up some questionable stock and sell it on to make a profit. It’s a risky business but, if you’ve got a lot of nerve, the gift of the gab and a freewheeling attitude to business, you can make a lot of money from selling weapons.

When the boys apply for a multi-million dollar contract to supply the US government with weapons in Iraq, they hit the proverbial jackpot. But just when David and Efraim think they’ve discovered the perfect crime, things get very dangerous and very nasty, very quickly...

Director Todd Phillips is more renowned for racy, hell-raising comedies than hard-hitting drama so, if you’re a fan of The Hangover movies and anarchic buddy flicks like Old School and Road Trip, you’ll understand and recognise his recurring theme of ordinary guys gone bad.

And that’s very much the case here with War Dogs, a film that’s inspired by true events. Adapted from an article published in Rolling Stone magazine, the real life tale of how gun runners David Packouz and Efraim Diveroli made millions from a lucrative contract with the US government is indeed fascinating and almost unbelievable.

It’s The Wolf of Wall Street meets Goodfellas, a rags to riches tale of greed, excess and corruption, and you get the sense that Phillips is honing his inner Martin Scorsese with War Dogs. However, for all its Scorsese-inspired, close cut narrative and editing, War Dogs struggles to navigate the moral minefield of its central themes and so the heavy nature of the subject matter jars with the light-hearted approach to David and Efraim’s dodgy dealings.

It’s a weird mishmash that has individual moments of style and finesse, along with bawdy, ballsy humour, but the mix of the two differing elements feels a little odd and off putting at times. In short, this exuberant tale of the dark side of the American dream is no-doubt entertaining, however it runs out of steam well before the laboured finale.

BIG, bold, brash and ballsy, War Dogs is a mildly amusing rags-to-riches fable with plenty of attitude, but little in the way of substance.