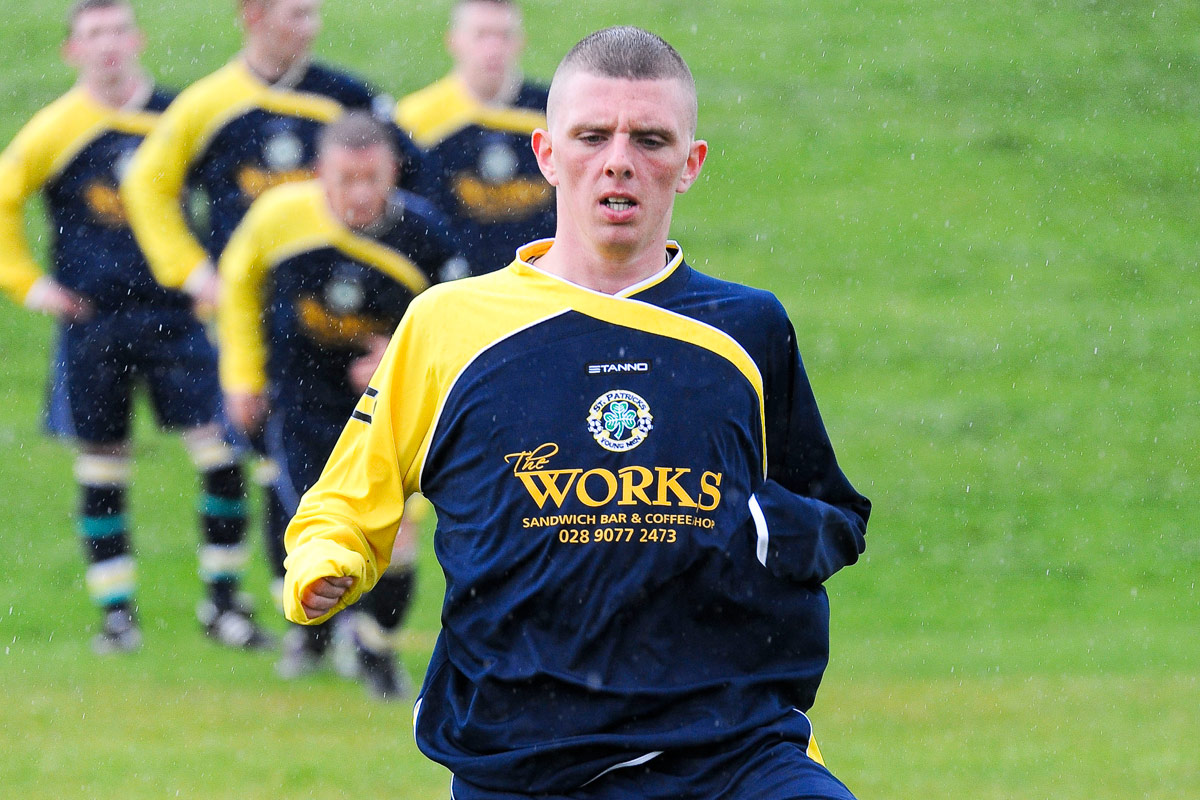 They dominated from the start and Michael Murray missed two good chances in the first ten minutes following good work by Keith Mulvenna and Raymond Spotswood.

Tony McNally then had a shot blocked after another Spotswood cross before Marty Jones hit the back of the net but he was adjudged to have handled during the build up and the effort was disallowed.

The Grange goalkeeper made two good saves to deny McNally and Murray before he was finally beaten after 25 minutes when Murray headed home a superb cross from the left by Packy Turley to give St Pat’s the lead.

Ten minutes later Murray and Jones combined to set up Spotswood who shot just over but moments later Spotswood made no mistake, cleverly lobbing the Grange goalkeeper to make it 2-0.

Before half time McNally volleyed a shot into the top corner of the net but once again a foul in the build up meant the goal was chalked off.

St Pat’s made it look easy in the first half but were reminded against any complacency when Grange scored within three minutes of the restart.

St Pat’s responded quickly though and Ciaran McManus had a header cleared off the line and was then unlucky to see his pile driver come back off the crossbar and upright before being cleared.

However, St Pat’s went into overdrive and scored three goals in a five-minute spell on the hour mark.

First a move involving Turley, Jones and McNally ended with the ball coming off a Grange defender into the net although Spotswood also claimed the final touch.

Aiden Mulvenna then sent a screamer from outside the box past the helpless goalkeeper to make it 4-1 before Keith Mulvenna and McNally set up Spotswood to complete his hat-trick.

Aiden Mulvenna had another shot saved for St Pat’s before Grange scored direct from a corner to reduce the arrears to 5-2. St Pat’s weren’t finished yet though and they scored a sixth goal following the best move of the game.

Owen Costello, Nick Light and McManus began the move before Aiden Mulvenna took over, playing a one-two with Spotswood, before putting McManus clear to tap the ball home.

St Pat’s were in complete command and Mark Stevenson made it 7-2 to finish the scoring when he headed in a cross from Spotswood.

This weekend St Pat’s hope to make it three wins from three games but face a tough challenge away to Ford FC who have also won their opening two league games.