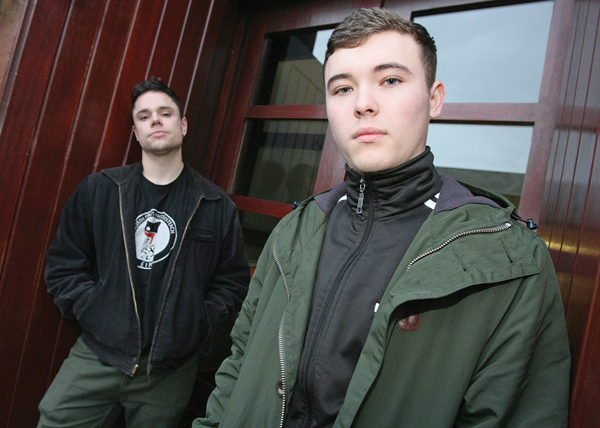 TWO controversial West Belfast rappers have said that RTÉ have done them a huge favour by banning their Irish language rap song Cearta.
In the song the satirical duo Kneecap – AKA Móglaí Bap and Mo Chara – refer to the PSNI as ‘muca’, which is Irish for pigs.
The song was removed from Raidió na Gaeltachta’s playlist pre-watershed due to drug references and cursing.
In the first ten days since it was removed Cearta has had over 100,000 views on Facebook and 13,000-plus on Youtube.
Speaking to the Andersonstown News the talented duo from Hawthorn Street said the response has been brilliant and that there’s no such thing as bad publicity. They said RTÉ won’t play the song on 2FM because of references about the PSNI and the bad language.
“If that doesn’t state that it’s banned then I don’t know what does,” said Móglaí Bap. “We are just taking a satirical look at life in West Belfast.
He added: “There’s a lot of up-and-coming young Irish speakers who enjoy partying and going out at the weekend, so what? We aren’t being disrespectful, we are just playing two characters.”
The duo have only been rapping together for a matter of months but the life-long friends already have the wheels in motion for their second song.
Mo Chara said: “Hopefully we will have something new out at the beginning of February. It’ll be more of the same madness”
When asked if he was enjoying the limelight Mo Chara said: “It’s all good craic, we know the story isn’t us, it’s the song. We’ve even made it into the [Sunday] Times!”
Móglaí Bap added: “We want people to know that Irish speakers aren’t just the one thing we are a diverse people and this is our attempt at highlighting that. We know that some people may not like what we are doing and that some people view the Irish language as pure but it’s all a bit of fun.”
Speaking about the ‘banning’ Mo Chara said: “I’m actually glad – we’ve been everywhere. They’ve done us a favour by highlighting it, we are loving it, anything that causes a bit of fuss is fine by us.”
Móglaí Bap added: “We would like to thank everyone who came out in support of the song by signing the online petition, that was good to see. It’s complete double standards from RTÉ we have had people telling us that there are songs on their playlist with explicit lyrics so why stop ours from being played?”
Cearta has been nominated in the Nós Music Awards for song of the year, music video of the year and the duo have been nominated as newcomers of the year. The ceremony will be held in Dublin later this month.
Irish language activist and Kneecap fan Conall Mac Corraidh said the song is “a genius piece of work”.
“We’re awakening the language in all aspects of life so why not explore the explicit rap genre. Something tells me these lads will have the last laugh in this one. RTÉ need to grow up.”
A spokesperson for RTÉ said: “RTÉ has not prevented Cearta by Kneecap from being played post-watershed on Raidió na Gaeltachta. Rather, the song was inappropriate to play pre-watershed.
“The language is explicit and there are sexual and violent references. The decision to play the song post-watershed has got nothing to do with the Irish language or the artist, but is solely based on the content of the song and our responsibility to our audiences as the national broadcaster.”