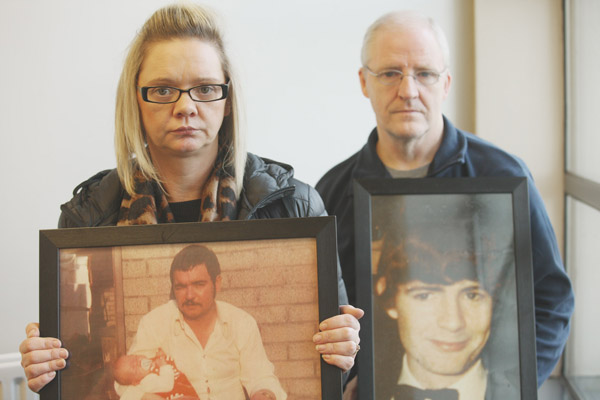 QUESTIONS: Lisa McNally with a photo of her father Gerard Clarke, and Chris Moran holding a photo of his brother John Moran

THE families of two men who died as a result of the Kelly’s Bar attack 46 years ago are appealing for witnesses to come forward with any photographs of the bar.
The families, along with their solicitor, have engaged the help of an engineer who will build a scaled reconstruction of Kelly’s Bar and the surrounding area, which can then be presented to a judge to assist with the forthcoming inquest.
Kelly’s Bar was located at the junction of the Whiterock and Springfield Roads. On Saturday May 13 1972 a loyalist car bomb exploded outside the premises, injuring over 60 people.
Continued from front page
After the explosion loyalist gunmen opened fire as people frantically searched through the debris trying to help those who were injured. Barman Thomas McElroy was shot dead. Nineteen-year-old John Moran died from his injuries ten days later. Gerard Clarke never recovered from his injuries and died 17 years after the attack aged 33, leaving behind a wife and four young children.
Speaking to the Andersonstown News Chris Moran, John’s brother, and Lisa McNally, the daughter of Gerard Clarke, said that 46 years later they are still carrying out the work that the RUC and the Historical Enquiries Team (HET) neglected to do.
Chris said: “Any information we have has been as a result of us knocking doors. We’ve had people from Birmingham, Dundalk, Downpatrick and Belfast coming to us with information. The RUC did nothing to help us, the HET ignored key evidence.
“The only reason an inquest was opened was because of the evidence the families collected. We are appealing for anyone who had a party or an event in the bar to get in touch with us with any photographs or information they have.”
Lisa said that the HET had failed the families.
“They were sitting there with all their resources and all the information at their finger tips and came up with nothing to help our case, yet here we are, two people, who along with the help of our solicitor are trying to gather vital information.”
At the time of his death John Moran was a 19-year-old student from Turf Lodge studying sciences at Queen’s University. He worked part-time in Kelly’s to fund his education. His only son John-Joe was born four months after his death and tragically passed away suddenly in August 2016 without the answers he so desperately wanted.
Chris said: “Unfortunately John-Joe went into a diabetic coma and passed away at the age of 46, he was heavily involved in the case with us and he never got any answers, it’s tragic.”
Chris and Lisa say this has now made them more determined than ever to get justice for their loved ones.
Chris, who was 14 at the time of his brother’s death, said: “John-Joe never saw anyone brought to court or the RUC held accountable for their lack of action.
“John was leaving the bar at 5.15pm to go home for his tea, he was due to start another shift at 7pm. He was talking to Gerard (Clarke) at one of the doors. As they were saying goodbye the bomb went off.”
Lisa’s father Gerard suffered multiple and life changing injuries.
“My daddy suffered mentally as well as physically,” said Lisa. “He was left blind in one eye, he had shrapnel in his body until the day he died. His kneecap had to be removed, he had hand injuries, he had severe stomach injuries and as a result he ended up with a stoma bag. He was constantly in and out of hospital for surgery for the remainder of his life and he used drink to numb the pain. That was his way of dealing with it.
“As a father he was unable to do normal day to day things and he relied very heavily on our mother. That had a really bad effect on him. Mummy had to do all the painting and decorating in the house as well as look after us four, he felt inadequate.”
Forty-six years later Chris and Lisa are still searching for answers and evidence.
“It’s so important to us that people come forward with any photos of the bar or information,” said Chris. “We need these for our inquest and maybe if we gather enough evidence it might lead somewhere and the truth might finally come out. This could all help with the Ombudsman’s report as well.”
Lisa added: “It is vital that we get information that can be used in a reconstruction. The HET said there was no way that Kelly’s Bar could have been hit at a range of one thousand meters. They failed to mention in their report the flats, which were only 400-450 yards away from the bar – the shortest distance of where the shooting could have taken place from.”
If you have any old photographs of Kelly’s Bar or information on the attack please contact Chris on: 07834545730, Lisa on: 07751406269 or Ó Muirigh Solicitors on 02890 230222.