Reds romp to victory over Point 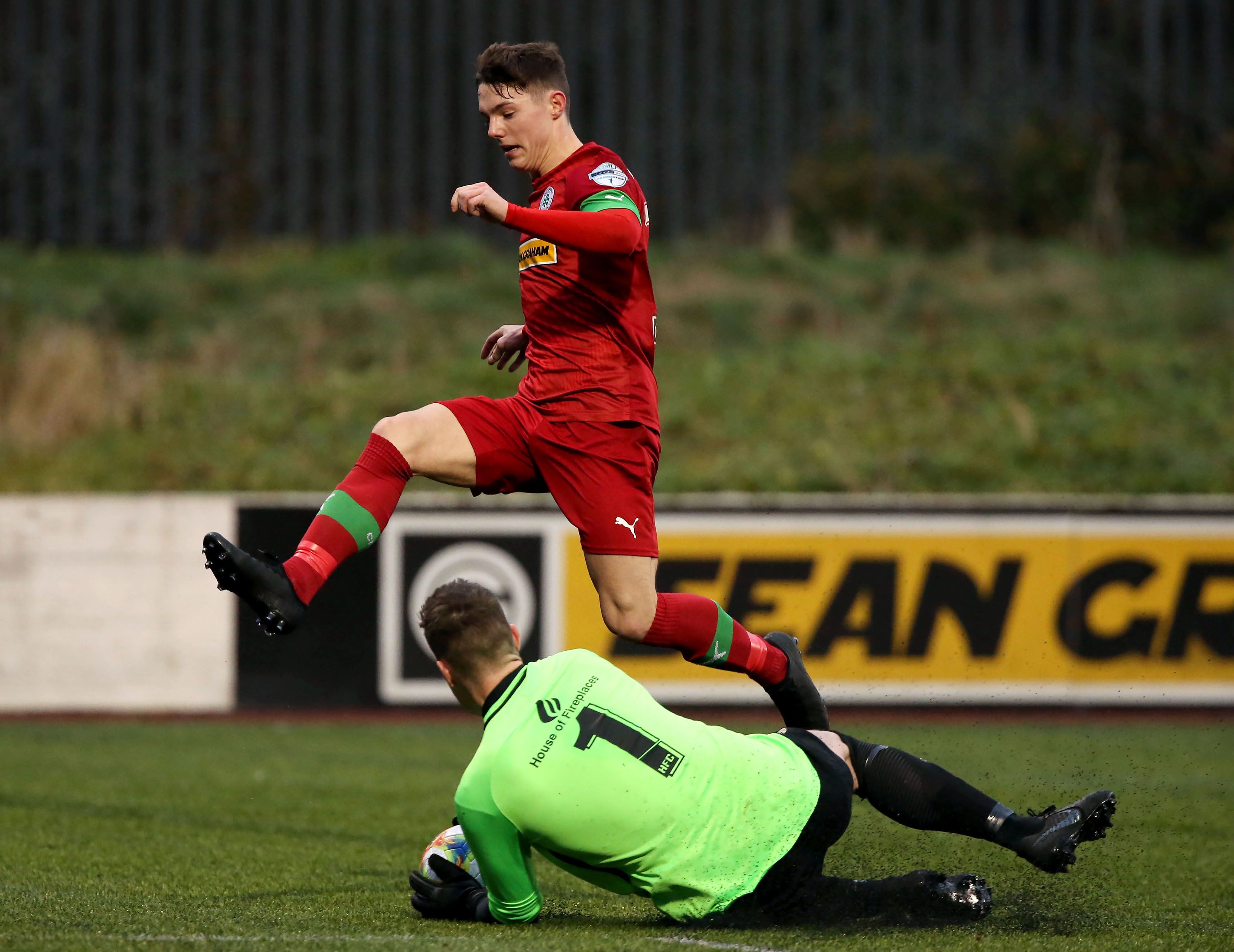 CLIFTONVILLE made it back-to-back home wins in the league with another 3-0 win against Warrenpoint Town on Saturday afternoon.

For the second Saturday in succession, it was Thomas Maguire who broke the deadlock - this time early on in proceedings but Warrenpoint Town remained a threat.

Leading 1-0 at the interval, the Reds raced out of the traps early in the second period as goals from Ryan Curran and Joe Gormley sealed the win for Paddy McLaughlin’s side.

The Reds' boss was pleased with his side's effort at both ends of the field and was delighted the result and performance.

“We’ve hit the post and their 'keeper pulled off a couple of decent saves so we might have been able to add to it,” reflected McLaughlin.

“We’ve had to make a couple of big blocks in the final third, which we probably shouldn’t have let the play get that far but fair play to the boys at the back. They kept their concentration and defended for their lives almost at times to keep the clean sheet.

"As a defender you pride yourself in clean sheets, goalkeepers as well, so we’ve had to work for the clean sheet but it was fully deserved.

"I thought we were superb at the back and three goals at the other end of the pitch were well worked so I’m delighted with the result and performance."

McLaughlin made three changes to the starting 11 from Tuesday’s 1-0 defeat to Glentoran.

Two were enforced as Aaron Donnelly dropped out through injury and Joe Gormley was also deemed fit enough to start on the bench along with Garry Breen. Into the starting line-up came Ronan Doherty, Ryan Curran and Thomas Maguire.

Warrenpoint Town carved out the first opportunity inside of five minutes when Ryan Swan laid the ball into the path of Matthew Knox whose low shot was parried by the legs of Richard Brush.

Cliftonville almost went ahead themselves at the other end when Chris Curran released Conor McMenamin who clipped the ball across the box to Thomas Maguire and Maguire picked out Ryan Curran whose header was easily gathered by Sava in the Point goals.

The opener arrived in the 10th minute and it was the hosts who claimed it. A quick free-kick from Jamie Harney caught the Warrenpoint defence napping and Ryan Curran slipped the ball through to Michael McCrudden who was felled by Sava inside the area, but Thomas Maguire seized upon the loose ball and finished to the net to make it two from two in the league.

Warrenpoint responded well to their set-back and forced a succession of corners, one of which went all the way across the box from Knox and Steven Ball found space but lashed the ball to the side netting.

On the quarter hour mark, another dangerous corner from Keelan Dillon was nodded wide by Stuart Hutchinson.

Matthew Knox floated a free-kick high and a few inches wide, while a high looping ball from Dillon released Fra McCafferty who somehow headed over the bar from a few yards out.

Paddy McLaughlin was forced into a change just before the half-hour mark as Michael McCrudden pulled up to be replaced by Joe Gormley.

Gormley almost made an immediate impact but nodded off target from Ryan Curran’s cross and at the break Maguire’s goal was the difference.

Another chance fell to Gormley after the break but Sava was equal to his curling effort, but the hosts didn’t have too long to wait before they doubled their advantage.

Ryan Curran latched onto a long ball and was able to keep his composure and finish low to the net to make it 2-0.

Joe Gormley missed a magnificent chance to make it three on 52 minutes but Gabriel Sava made a fantastic save from point-blank range and Thomas Maguire’s follow-up was deflected behind for a corner from which the third goal arrived courtesy of Gormley.

The striker swiped at his initial opportunity but found the roof of the net with a half-volley to make it 3-0 and claim his second league goal of the season.

Warrenpoint had two gilt-edged chances to pull a goal back. First, when Jake O’Connor saw his effort hacked off the line by Conor McDermott.

McDermott was on hand again two minutes later to get his body in the way of substitute Adam Carroll’s goal-bound shot and from the resulting corner Steven Ball ballooned a decent effort over the bar.

With a quarter of an hour remaining, Ryan Curran was denied his second of the day by the base of the post after some neat work from Daire O’Connor.

Curran had a further opportunity to claim his second of the afternoon but was denied after Sava after rounding the shot-stopper.

The Warrenpoint 'keeper denied Ronan Doherty from a thunderous free-kick before the conclusion as Cliftonville settled for a 3-0 win which moves them to third place in the table.