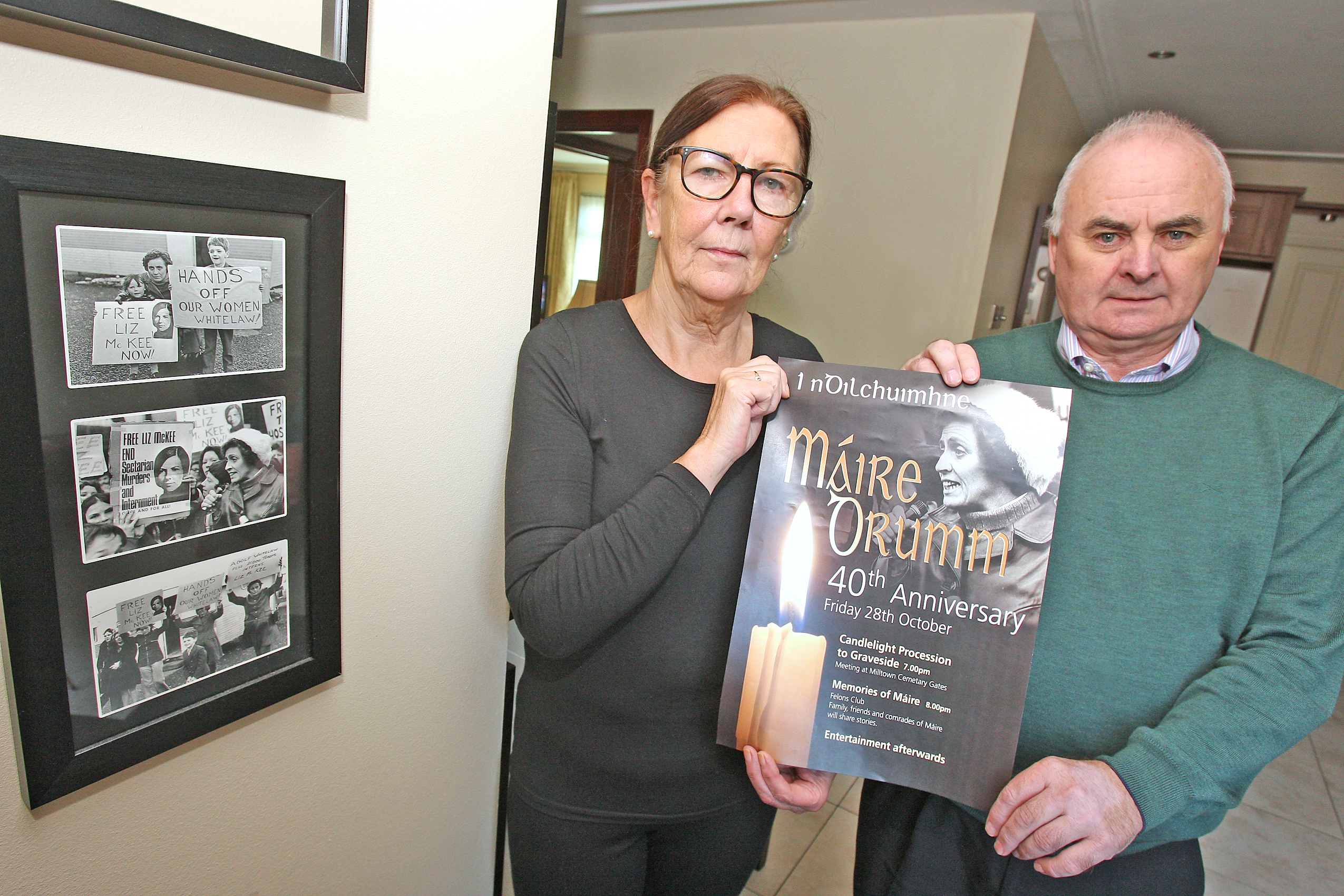 MÁIRE Drumm was a leader and a revolutionary, but more importantly she was a wife, mother and grandmother who left behind a family who will never forget her.

This week marks the 40th anniversary of Márie’s murder by loyalist gunmen while she lay defenseless recovering from eye surgery in the Mater Hospital.

Máire’s eldest son Seamus said an event will be held in her memory this Friday, October 28.

“There will be a candlelight procession to her graveside at 7pm, with people being asked to meet at Milltown’s gates. Afterwards we will head over to the Felons where we will share stories and memories from family, friends and comrades and there will be entertainment afterwards.”

Máire was born in South Armagh in 1919. In 1942 she moved to Belfast where she became involved with republicanism. She met her future husband Jimmy in the visiting room of Crumlin Road Gaol and they married in 1946 and settled in Glassmullin in Andersonstown where they went on to have five children. She went on to become Vice-President of Sinn Féin and famously led the breaking of the Falls Curfew in July 1970.

Seamus said: “I was 28 when my mummy was murdered. There’s so much I don’t remember about the time, I suppose you just block certain things out.

“She was a very compassionate woman who had a lot of Protestant friends. She would have went to the Morning Star Hostel every Christmas Eve and would have invited one of the residents to come and spend Christmas with us, that was one of her traditions. She took no nonsense but she had the biggest heart of anyone I’ve ever known.

“There were people living in caravans in the field facing our house and my mummy would have brought them in for something to eat, for a bath. Then before we knew it they were in charge of our TV, we weren’t happy about that, we wanted to watch the football and these strangers were in our front room watching Coronation Street!”

Seamus’ father Jimmy, who passed away in 2001, was the ‘most interned man in Ireland’.

Máire was no stranger to detention herself having been arrested numerous times throughout her life.

“She didn’t fear for her safety when she went into hospital. In fact she felt safe because it was the Mater and it was run by the nuns, she swore by the Mater. Our Catherine and Margaret got sent to the primary school beside it because the Mercy Nuns were in charge. She was to be moved from the Mater to Dublin the next day and she was murdered.

“My sister was in jail at the time. She got out for 24 hours to go to the funeral then had to go straight back. It was a very hard time, she was only 21 at the time, a child. People were used to losing their fathers but not their mothers.”

Máire’s good friend Liz Maskey will be on hand in the Felons to recount tales of Máire and share her memories of her friend.

Seamus said: “Liz was the first female internee and my mummy led the protest to have her released, they developed a great friendship and we are delighted to have Liz there on the night.”