Repeat or the ultimate revenge? 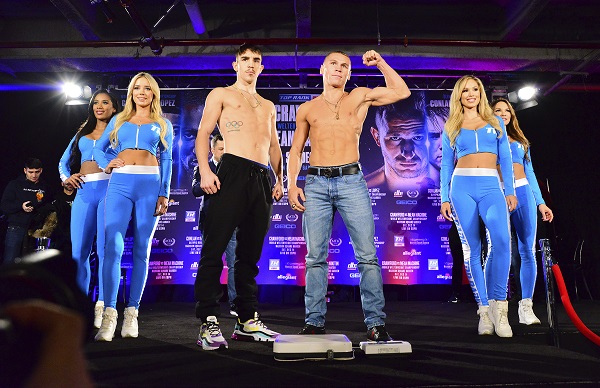 NOTHING PERSONAL - just business. That's the final word from MIchael Conlan as he readies for battle in Madison Square Garden at 9pm tonight (2am Irish time, live on Eir Sport) against Vladimir Nikitin.

The story of the Olympic Games in Rio when Nikitin was awarded a hotly-disputed win over Conlan has be relayed ad nauseum, so the Belfast man is eager to lay those ghosts to rest once and for all as he plots his way to a professional world title to add to his World amateur gold.

At yesterday's weigh-in under the Brooklyn Bridge, Conlan scaled 125.8 lbs, while Nikitin was nine stone on the button.

There was the usual stare-down between the two, but Conlan insists his only thoughts are on winning another fight and taking the next step towards world honours, rather than any sense of vengeance.

In a way, Nikitin is also the victim of what happened in Rio as that decision has dogged him since, but the outcome was out of his hands and was more to do with backdoor shenanigans rather than what he did. Yes, Conlan feels he owes him one, but there is no grudge.

It's simply a fight that has to be won and he says he is ready to do just that in a match-up that is likely to produce fireworks given the Russian's aggressive style and Conlan's ravenous hunger to seal the deal in emphatic style.

“No emotional attachment to it," he stressed.

“It’s straight business. My mindset going in is to have a rude, kind of cocky mentality and box his ears off and if I see the opportunity to stop him and take him out I will.

"This win is just as important as the next win and the win previous to it. Every win is more important than the last, in boxing you have to keep winning because it’s like snakes and ladders - once you lose you’re right back to the bottom.

“I need to win and when I do I’ll think: ‘Thank God I’ve won and it’s done’. I’ll be relieved that we don’t have to talk about it no more.”

Despite the background to this professional reunion of old amateur foes, there hasn't been much trash-talking in the build-up. It's simply been a case of two men who are convinced they are are better than the other and both intend to prove as much when the opening bell goes this evening.

That could translate into fireworks with Nikitin's head-down, aggressive style leaving no other option but for this to be a tear-up. Conlan doesn't expect his foe to change style overnight, but does anticipate he will produce his best performance as a professional, but he is ready for whatever comes at him.

"He could (box more) but I doubt it," was his prediction.

"He will be better than we've seen so far as a professional because this is his world title fight. This will be the best we've seen from him.

"If he tries to box or come in close to take my head off, I'm ready for whatever because of what we've worked on in camp.

"The public and boxing media are underestimating him because he hasn't performed to his level as a professional, but I'm not. What people say doesn't matter; what matters is what happens on Saturday night and that's what I'm ready for."

Given Conlan lost to Nikitin at the 2013 World Championships and then was the victim of that decision in Rio, there is an element of pressure on him to finally get past Nikitin.

However, his past experiences of topping the show in New York and on home soil at the Falls Park leaves him in a good place mentally as he prepares for the spotlights to shine even brighter than before.

There is confidence, but no arrogance. He knows this is not some sort of testimonial-like fight where it's simply a case of showing up and winning. He will have to dig deep at stages, but is ready for battle and to slam the door shut on everything that has gone before.

"I'm used to these high-pressure situations whereas a lot of fighters don't get that until the big nights," he agreed.

"I've had that so it's nothing new in terms of pressure. Maybe just me, I just don't want to lose to this guy again so I know what I have to do.

"I'm just excited now. I feel like I'm better than I was as an amateur. People keep asking about next year, but this is all I'm focussed on. I know this isn't a foregone conclusion so it's given me more focus and confidence for what's going to happen."