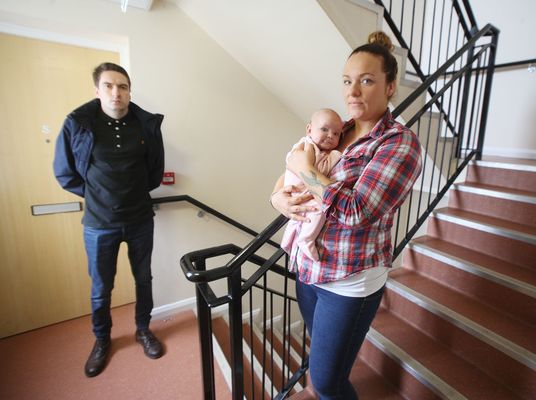 A WEST Belfast mother-of-two says the health and safety of her family is at serious risk after the fourth gas leak in her Glen Road apartment.

Lauren Scullion told the Andersonstown News that the apartment block where she lives is managed by Habinteg Housing Association, who are fully aware of the situation but nothing is being done to make the apartment safe.

“I have lived in the apartment for a year and five months, I live here with my new born baby and nine-year-old daughter, who are both asthmatic. The first gas leak was soon after I moved in, I had to contact the NI emergency services for gas as I could not get a hold of anyone in the out of hours Habinteg service. We have water leaking through my electrics and there is dry water on my electric box and when you open it you can smell the dampness. Is it going to take something to go on fire for them to respond to it?

“The building is not safe to live in. When I have reported the issues to maintenance it’s like they don’t care and have a very poor attitude. It has been going on for too long and needs to dealt with immediately.”

People Before Profit’s Matt Collins,who has been supporting Lauren, said it is “quite unacceptable in this day and age to have a situation like the one Lauren faces with a young baby at home”.

He added: “Lauren is having to deal with seemingly continual water leaks, the damp issues that inevitably come with it and other long standing maintenance issues associated with her building. These pose an obvious health and safety issue that need addressed.

“I have contacted Habinteg to request this. We are calling on them to resolve this speedily for Lauren, and indeed any other residents facing these problems.”

No-one from Habinteg Housing Association was available for comment.