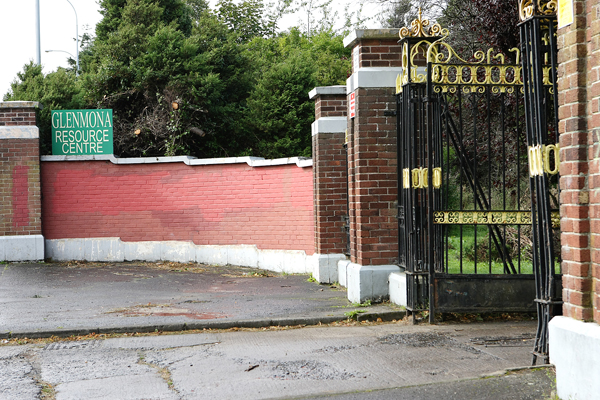 REDEVELOPMENT: The Glenmona site on the Glen Road

RESIDENTS living in the grounds of the Glenmona site on the Glen Road have been given three months to find new accommodation after receiving notice of eviction.
The 34-hectare site on land owned by the Catholic Church has three children’s care units on site, an administration building and four private residential buildings. The sprawling site has been earmarked for housing.
Speaking to the Andersonstown News one resident revealed: “We received a letter last week from the landlord’s solicitors saying it is the landlord’s intention to bring the existing tenancy to the property to an end on August 31.
“Truthfully I think we knew this was coming but we didn’t expect it to be so quick.”
He added: “There are four residential units on site and three of them are where the employees live, so are they losing their jobs and their homes or will they be relocated?
“Most of the residents have lived there for a long time and now we have all been given just three months to arrange new accommodation, get packed up and moved, it’s not really an ideal amount of time. It’s definitely going to be a stressful few months for everyone involved.”
A spokesperson for the Belfast Trust confirmed: “The Trust has been served notice by the landlord, the Catholic diocese. Any potential impact on staff may be in relation to relocation of their current children’s home to another site.”
“We cannot comment on the private decisions of the landlord.”
SDLP Councillor Tim Attwood said there are a lot of questions that need to be quickly answered to reassure people amidst growing speculation.
“I spoke to a resident who is very concerned about the prospect of being homeless in a matter of weeks and we are trying to find out why residents need to be moved off the site so soon,” he said.
“My main concern is why does the eviction need to be now? Are the Church looking to move quickly with the development of the site? If not is it really necessary for residents to be gone in just three months? These are critical issues and despite our efforts to arrange meetings to discuss the development of the site they continue to keep pushing them back. Down and Connor have a responsibility to talk with the residents and make sure no one is left in a homeless situation and ensure alternatives are available.”
A spokesperson for The Diocese of Down and Connor said the diocese was obliged to give notice to the tenants – four in total – of the end of their residential tenancy agreement.
“While the legal requirement is to give one month’s notice, the Down and Connor Diocesan Trust has provided three months’ notice.”
The spokesperson added: “The Trustees will provide more information on the development of the site when it becomes available.”