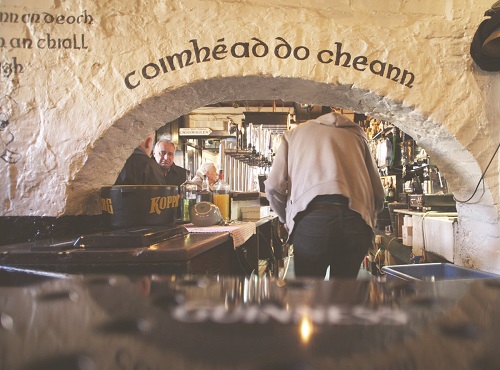 Why does that Kelly’s arch require staff to duck down?

“Do you know why the arch behind the bar is so low? No? I’ll tell you later. Take a look at the height of the bar counter.”

The question was put to me away back in the early 1960s by Jim Gallagher as he brought me through Kelly’s Cellars for the first time. An accomplished musician, Jim supplemented his teacher’s salary playing the Hammond organ in the Red Barn, a cocktail lounge above the Star and Garter in Rosemary Street six nights a week. Although he didn’t drink alcohol at the time, Jim had a fascination with pubs, especially old ones. One of his favourites was Blake’s the Hollow in Enniskillen. He later went on to own a pub called the Ulster Vaults, one of the first to be burned down by loyalists in East Belfast, and later a new pub in Cornagrade in Enniskillen before concentrating on a very successful career in promoting in many venues throughout the north.

Kelly’s Cellars then belonged to Kevin O’Kane who was a director of a wholesale bottling plant in Whiteabbey and who owned several pubs including the Club Orchid, the Fountain Tavern and the Greenan Lodge Hotel on Blacks Road, where I assisted Jim in running dancing and cabaret shows in the 1970s.

We entered Kelly’s through the main door and Jim showed us the room on the left, which looked like an oversized snug. A few old women were chattering, smoking and drinking porter. “That’s the last of the shawlies,” Jim told us. “That’s the only part of the bar they are allowed in.” To the right was the main part of the bar. As now, there were whitewashed walls, black bench seating shiny from centuries of use, barrels being used as tables and a number of snugs. It was obvious that many of the regulars were adept with penknives for nearly all of the barrels were adorned with initials of the imbibers. Kelly’s Cellars was then (apart from the little room) a men-only bar. Prior to 1961 the bar was owned by JJ Tohill, who was said to have a very welcoming personality. While he was regularly about the bar he didn’t serve but mixed with the clientele and introduced visitors to the regulars. The manager was Dublin-born Bob Wilson who worked there for over 40 years for three different owners. He often told the story that he took the post of barman for two weeks, filling in for a man who was ill, and he stayed on for 50 years, 40 as manager. Tohill developed the upstairs into a select cocktail bar. A uniformed commissionaire manned the door. Unaccompanied females were not allowed to enter – how times have changed! The lounge was a great success and Tohill engaged renowned Belfast artist Sydney Smith, who painted a classical mural across the ceiling. The official opening was performed in 1954 by Frank Swift, former Manchester City and England goalkeeper, then a journalist, who was tragically killed four years later in the Munich air crash along with the ‘Busby Babes’.

Right up to the outbreak of the Troubles, Kelly’s Cellars was the haunt of journalists, businessmen, bankers and sportsmen. Many a big local football signing was completed in the privacy of one of the snugs. When Kevin O’Kane bought the pub in 1961 he inherited a visitors’ book which Bob Wilson had started in the 1950s. He loaned it to Jim Gallagher and we had over a week to go through it. It was like a trip down memory lane. Football managers included Matt Busby, Bill Shankly, Jock Stein and Jimmy MacRory. Many of soccer’s immortals were visitors: Stanley Matthews, Peter Doherty, Len Shackleton (the Clown Prince of soccer), Belfast Celtic’s Charlie Vernon, Charlie Tully, Danny Blanchflower, the Portuguese national team and Edinburgh’s Hibernian squad in 1957. Touring rugby teams including the Springboks in 1954, who recorded their presence. Golf’s Fred Daly and Dai Rees were there too, boxers Rinty Monaghan, Floyd Patterson and Sonny Liston. Poet Louis MacNeice and actors such as JG Devlin, Albert Sharp, Richard Hayward and Jack Loudan all made an appearance. I’ve no idea where that visitors’ book is now but I’m certain it would prove to be a moneyspinner at auction.

Kevin O’Kane sold Kelly’s Cellars in 1972. He felt that it would be suitable for family management. He didn’t have enough time to personally run it. He was greatly surprised when Kelly’s and the Fountain Tavern were both purchased by Croft Inns, then owned by McKibbons and later acquired by Guinness. As the clientele changed from well-heeled middle-aged to denimed youth, a decision was made to modernise the premises. The snugs were pulled out. The knee-high counter was raised to waist height and the old polished wood was replaced by plywood. Plans were afoot to raise the height of the arch and to plaster the walls and paint them. All of this was conceived as a way to attract a “better class of customer”. The original counter was donated to the Ulster Folk Museum. Inevitably, the plan failed miserably and some effort was made to restore the premises to something like their original state.

The pub is now run as a family business again and, happily, is prospering once more. It is a Mecca for traditional music and is rightly regarded as a must-visit Belfast attraction. I’m not sure whether there is a visitors’ book.

So why is the arch so low? Jim told us as he returned the visitors’ book to Kevin O’Kane: “Away back in 1720 when it was built, the floor on the serving side of the counter was much lower than on the public side but it had been built up level after it had caved in” But even he had no idea how it had happened.