Richard goes in to bat for our flying mammals 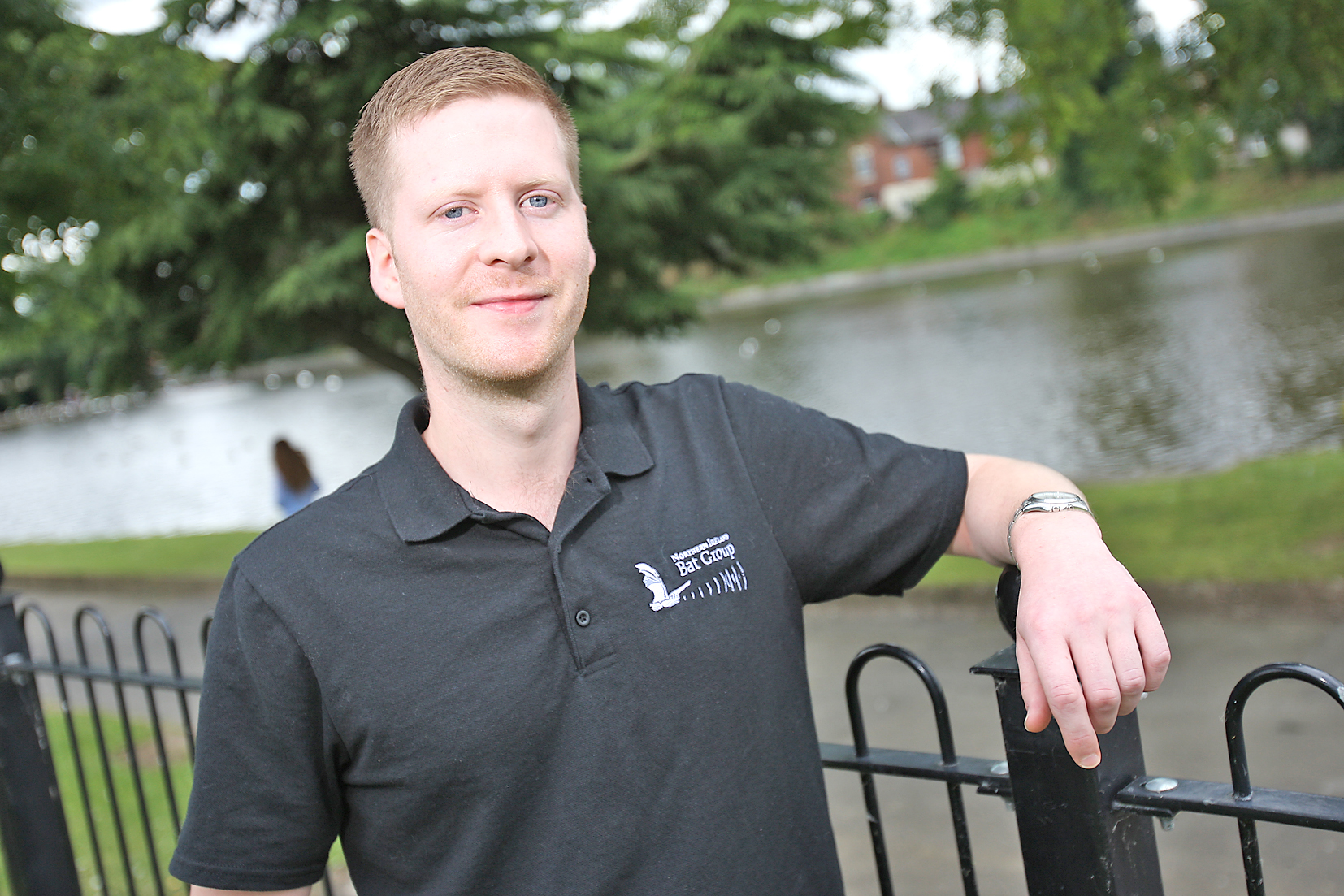 Richard Ayre at the Waterworks – open water and mature trees in North Belfast are very attractive to bats.

WHAT have bats ever done for us? Perhaps not a question one has ever asked before, but the answer is quite a lot.

For example, did you know that without them there would be no chocolate or tequila – such is their important role as pollinators in the Americas?

Closer to home their healthy appetites ensure we are not overrun by midges and daddy longlegs at night. That goes for moths too.

All of this information comes from Richard Ayre whose work revolves round the flying mammals.

He says he has been spending more and more time in North Belfast recently because it is a hotbed of bat activity. But due to years of bad press thanks to old wives’ tales and Hollywood movies, bats aren’t well loved by the general public and this is something Richard wants to address.

“North Belfast is very good for bats. There’s a lot of water bodies around, which bats like, particularly in Ligoniel so there are lots there.

“This area has maintained all the old mature trees along the avenues which are quite good for bats. There’s a lot of mature garden areas and the wooded areas of the Cave Hill are very good for bats as roosting sites.”

A lot of bats means increased human contact, however, and that’s where things start to get a little complicated.

“All bats are protected because their populations have been declining over the years. With some species the numbers are holding. The Common Pipistrelle and Soprano Pipistrelles are pretty stable, but other species like the Whiskered Bat and the Nathusius Pipistrelles we know very little about in Ireland, and that’s why they’re protected. Their numbers have been falling.

“We have eight native species up here and nine in the whole of Ireland – there is a species found in the very south of Ireland that we don’t get up north. Throughout the UK there are 19 species and of that we get eight.

“The two biggest challenges to bats are misun-derstanding by the public and the chopping down of dead trees. Trees get felled straight away when they die now but these are the ideal roosting spot for bats. That’s why we are seeing them move into our homes more often, because we have been felling the ancient woodlands and dead trees.”

People finding bats in their home often panic but Richard says they pose no danger. Also, they are protected in much the same way as badgers are and it’s against the law to disturb them.

“They only use our homes to have a pup, and each female will only have one pup a year. That’s the only reason they use our homes but because of misunder-standings and all the old wives’ tales that go around people are fearful of them.”

Yes, vampire bats exist and do feed on blood, but they exist in the Amazon and only feed off animals, says Richard.

“Because of Hollywood everyone has these fears of bats but all our species are micro-bats. Pipistrelle are the size of your thumb and our largest species, the Leisler’s, are the size of the palm of your hand.

“In the early evening the wings make them look a lot larger than they are. People thing they’re flying rats but they have more in common with humans than mice or rats.”

Richard’s work with the Northern Ireland Bat Group sees him give talks all across the north with the aim of educating people on their valuable contribution to our ecosystem.

“I am involved in bats commercially as an environmental consultant but the group stuff is all voluntary-based. All the members are volunteers who come from all different backgrounds.

“Primarily our aim is to educate the public to raise awareness of the issues surrounding bats and of bat conservation. We do talks and walks for councils and groups. It’s an hour-long presentation that gives a bit of background on our native species, then we go out with bat detectors and do a show and tell.”

And Richard has some advice for anyone who comes across a bat in distress.

“If someone has a bat that flies into their house or bedroom, the best thing to do is to turn the light off, open the window and close the door. The bat has come in because it is chasing a moth or a midge that has come into the house. They will make their own way back out.

“If you come across a grounded bat or an injured bat, during working hours contact the Northern Ireland Environment Agency or the Centre for Environmental Data and Recording. You want to put the bat in a shoe box with holes put in it with the tip of a pencil, get the cap of a Coke bottle and fill it with water.

“Nine times out of ten they have become grounded because they are dehydrated. So do that and give us a call.”