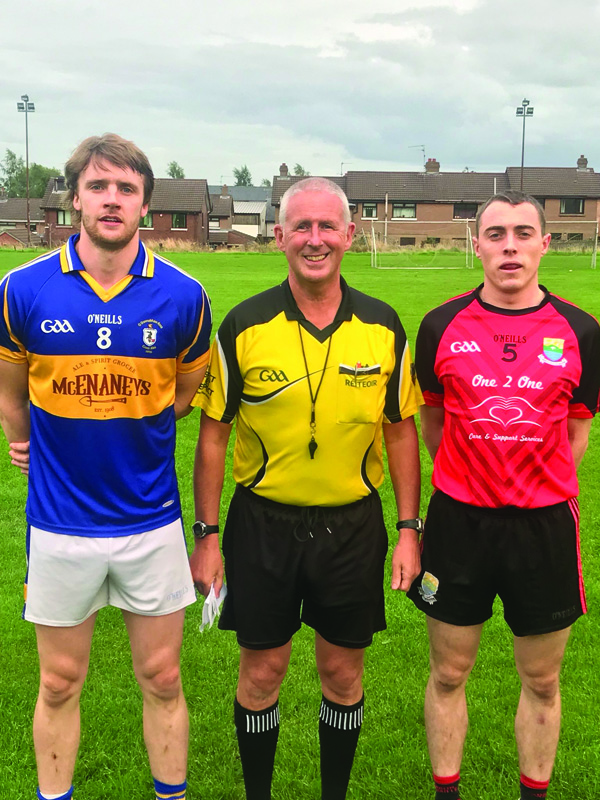 O'Neill's Antrim Football League Division 1B
O'Donovan Rossa 1-15
St Mary's, Ahoghill 1-15
A POINT apiece was the outcome of Wednesday night's Division 1B clash as Rossa and Ahoghill were forced to settle for a draw that was more beneficial to the visitors than the hosts.

As the final whistle went in virtual darkness, Rossa couldn't forge a winner that would have given them a fighting chance of escaping the bottom two, but it is as-you-we with the West Belfast side still trailing, third from bottom St Mary's by three points with just two games left to play now.

It really shouldn't have been the case for Rossa who looked like they were going to romp to victory as they led 0-9 to 0-2 after a flawless opening 15 minutes, but they completely lost their way and trailed at the break by one having scored just one point in the second quarter.

It was nip-and-tuck in the second period and Rossa appeared to have taken a grip when half-time sub, Darren Grego goaled with 15 to play, but instead of pushing on they sat back and it took a late score from man-of-the-match, Thomas Morgan to secure a draw,

Rossa looked fantastic early on and made all the running with their quick, incisive attacking play yielding score after score.

Stephen Beatty kicked the first on three minutes with James Cooley adding a second after a one-two with Dominic McEnhill before Ahoghill got off the mark through Owen Neeson.

The hosts were slicing through the Ahoghill defence with Morgan kicking three points, complimented by scores from Colm Fleming and Sean Pat Donnelly to go six clear on 10 minutes.

Donal Graham replied from a free, but Morgan cancelled this out before Stephen Beatty kicked a beauty with the outside of his left boot to make it 0-9 to 0-2 on 15 minutes.
They lost their way however, as Ahoghill upped their game and the South West side were to hit 1-2 in the space of two minutes.

James O'Connell and Neil O'Connell kicked the points, while a stray kick-out to Daniel O'Neill saw the wing-forward pass to Owen Neeson who cracked the ball high into the net.

With their tails up, Ahoghill pushed on and hit a further four in-a-row through Eoin Graham, Martin Graham, Thomas Hamill and Donal Graham to go two ahead approaching the break, but Donnelly ended a barren 15 minutes for Rossa to leave just one in it at the break - 1-8 to 0-10.

There was little between the teams in the third quarter as both hit three points apiece, the pick of them coming from the hosts as Stephen Beatty swivelled and shot under pressure from out on the left having initiated the move with a timely intercept in defence as the gap remained at one.

Then came what could have been a turning point as from a quick attack, Darren Grego burst forward, swapped passes with Donnelly and cracked home a fine goal to give his side a 1-13 to 1-11 lead.
However, again Rossa seemed to stop and invited Ahoghill onto them. They were eventually pegged back as first, substitute, PJ O'Connell kicked a free and then with four to play, James O'Connell kicked a great score.

Colm Fleming edged Rossa back in front from a free, but from a quick break, James O'Connell leveled and then another substitute, Diarmuid Graham kicked what looked like the winner with the clock ticking towards 60.

Rossa did find a reply and Grego burst through to land his seventh of the evening, but try as they might, the hosts couldn't conjure up a winner as they claimed a point that does move them off the bottom, but needing to win their final two games and hope Ahoghill lose both theirs to overtake the St Mary's club in the final standings.