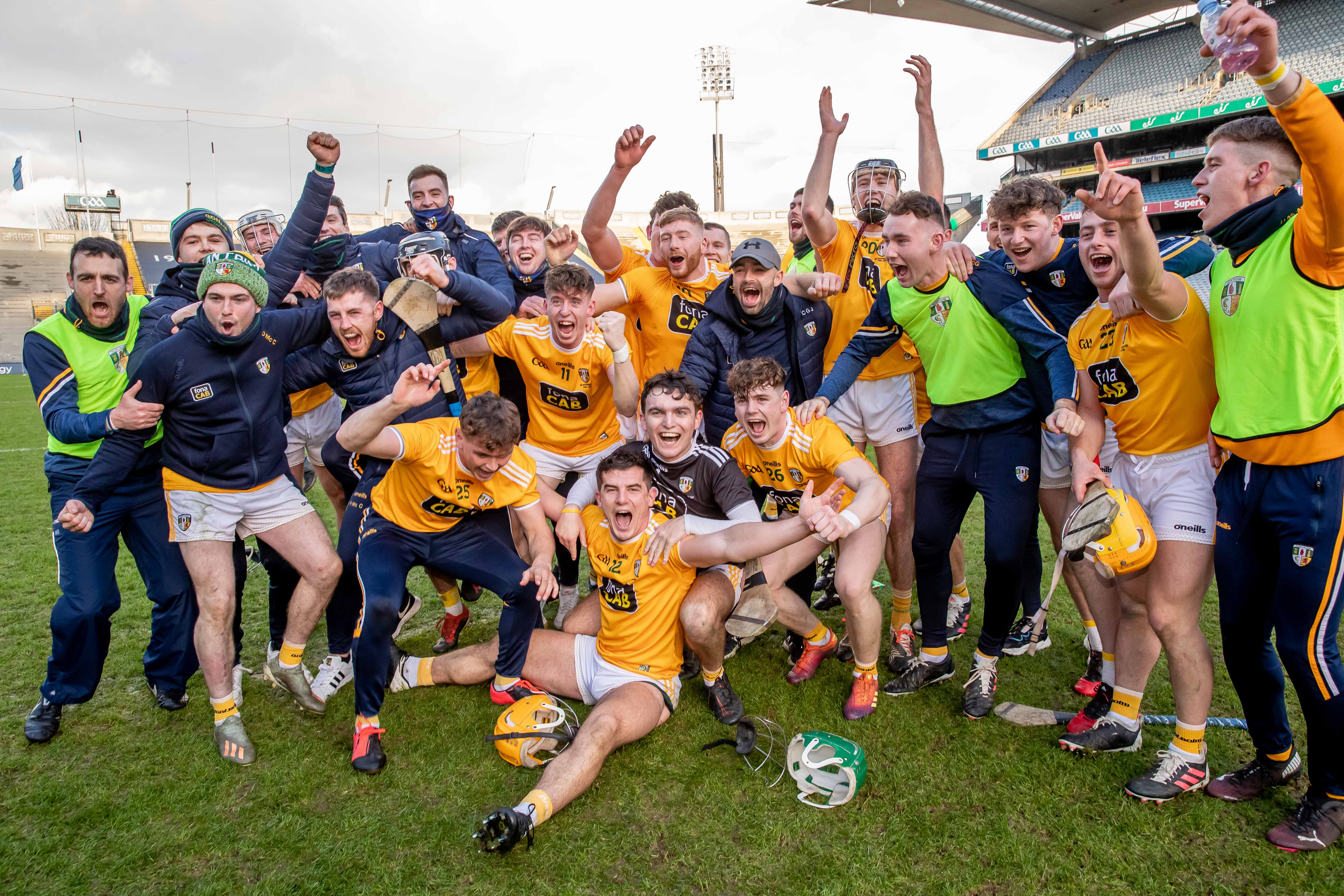 CHRISTMAS came early for Antrim's hurlers this afternoon as they fended off a dogged Kerry at Croke Park.

This, the fourth meeting of the teams this year, was always likely to have a derby feel to it and so it proved, but the classier hurling was to come from the Saffrons who finally managed to take a grip in the third quarter.

Kerry once again posed the questions, but Antrim had the answers on the day with their bench making all the difference.

Neil McManus made his first appearance of the competition as a second half substitute and steered over four vital scores, with Conal Cunning landing a brace. Domhnall Nugent added the physique they required in the second period and Conor Johnston was lively during his time on the field.

It may not have been the most fluid of attacking displays from Antrim, but credit has to go to Kerry who were a lot more solid at the back than the game between the teams last month and it was a case of Antrim having to grit. their teeth and dog this victory out that completed a League and Championship double for 2020 where there remained unbeaten in both competitions.

"It was a tough win," said Antrim manager Darren Gleeson after.

"Kerry came and set-up in the first 20 minutes to stifle us and they did that really well. They then got a platform then up front with four forwards in space.

"We probably didn't flow until the third quarter of the game but probably did enough in those 10 or 12 minutes to get use over the line.

"We did that so I'm happy enough. We weren't coming here today to flash a team out of the water - just that we got over the line is what it's all about."

This game took a while to settle with the first few minutes dominated by rucks with both sets of players keen to stamp their authority, bu tin the opening quarter Antrim looked that little bit sharper.

Ciaran Clarke knocked over a fourth minute free and then added another from play on the turn.

Shane Conway got Kerry off the mark with a sixth minute free but this was cancelled out by one from Clarke and then team captain Conor McCann slung over an excellent score off a break.

A quickly taken Kerry free allowed Paudie O'Connor in for a score, but the hugely impressive Gerard Walsh showed his football skills as he booted long to Clarke who scored before a great ball from Joe Maskey down to James McNaughton resulted in a score for the Loughgiel man to make it 0-6 to 0-2 at the water break.

Kerry had made little impression in attack and were off-colour with their shooting in the opening period, hitting eight wides in the first half, but the spark they needed arrived on 20 minutes when they were gifted a goal as Matthew Donnelly lost Shane Nolan's ball in from the left in the winter sun and Mikey Boyle was only too happy to roll to the net from close range.

A Conway free tied the game as they sides were next and neck for the remainder of the half.

Michael Bradley scored an excellent point out on the left which was cancelled out by as Conway free, with Clarke (free) and Daniel Collins trading scores.

Antrim had looked threatening when space opened up but the ball just wouldn't fall for the goal chance although on 33 minutes, Niall McKenna found himself in possession and despite being surrounded, got the ball away towards goal but as it looked to just roll over the line, Kerry goalkeeper John B O'Halloran scrawled back to clear off the line.

Clarke pointed a free to edge Antrim back ahead, but a Conway free and point from Michael O'Leary deep in stoppage time saw the Kingdom take a 1-7 to 0-9 lead into the half.

Whatever was said in the Antrim dressing room at half-time worked a treat as the intensity levels grew from the off and they would limit Kerry to just one point in the third period, that arriving on 51 minutes through Padraig Boyle.

By that stage, the Saffrons had rattled off three-in-a-row through Clarke (three), Niall McKenna (two) and McManus with his first touch as suddenly they began to look more like themselves.

A McManus 65 left Antrim 0-16 to 1-8 ahead going into the third quarter when Kerry managed to rally again and a Conway free followed by a Colm Harty point from play left just three in it.

Antrim looked to have broken for home with two Clarke frees and one from play through Conal Cunning to leave six in it with 10 to play, but Kerry were right back in it with three of their own thanks to Brendan O'Leary, Conway (free) and Daniel Collins.

This ensured a nervy finish with Cunning awarded a point thanks to Hawkeye with Conway cancelling this out from a free, but two pointed placed balls from McManus left four in it with the game in added time.

Conway's first from play left a goal in it and when he landed a free six minutes deep in added time, the Kingdom had hope of snatching a late winner, but it was the Antrim defence, so superb throughout, who stood up with the ball cleared upfield to the soundtrack of the final whistle.

"I was delighted we dogged it out and took a lot of satisfaction from that," added Gleeson.

"We've two defenders in the backroom team in Johnny (Campbell) and Jim (Close) and they were delighted too as they don't like the forwards getting the praise all the time! But no, we're delighted to dog it out and get over the line."