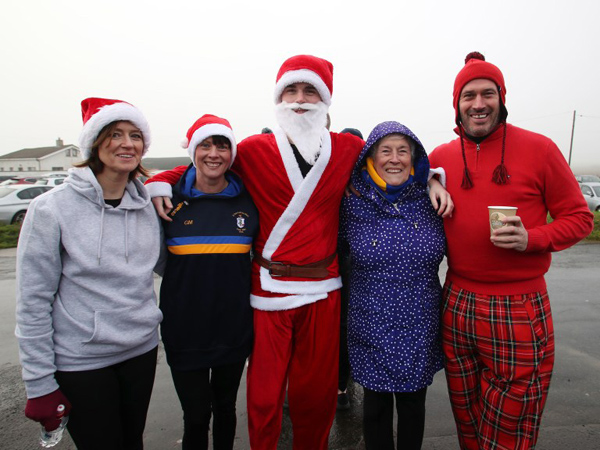 O’DONOVAN Rossa GAC is calling on all Gaels to support their annual St Stephen’s Day walk on Divis Mountain.

Now in its 12th year, the annual charity fundraiser has raised in excess of £30,000 for a variety of charities and causes that have affected our members. This year is no different as we hope to mark another anniversary and raise funds for SANDS NI.

SANDS NI is part of Sands, the stillbirth and neonatal death charity. SANDS operates throughout the UK, supporting anyone affected by the death of a baby.

They provide direct peer support to bereaved parents; they work with local healthcare professionals to promote their access to Sands’ materials and training and they raise awareness about stillbirth and neo-natal death to help break the silence about this charity.

This charity is close to the hearts of many in society and also at Rossa with club member Aidan Carabine and his wife Ellen having been affected by the loss of their baby boy Joseph three years ago.

It was a traumatic time for the family, but thanks to the support of SANDS, they have gradually come to terms with this tragedy.

“We had a baby on December 6 2016 who was born with Trisomy 13 (also called Patau syndrome),” explained Aidan.

“We found out at 20 weeks he was sick, but survived until birth and lived for a few hours. It’s very difficult to carry on with daily life, so any help is great and SANDS helped us.

“You don’t think of it at the time, but they have a thing called a ‘cold cot’ they provided the Royal (Victoria Hospital) with and what that did was to preserve his body.

“That meant we could hold a wake for him and that obviously helps with the grieving process. He looked just like a normal baby and SANDS helped us by providing footprints and handprints of him. At the time you are numb, but three years later we have these memories of him.

“Really, we would like to help spread the awareness of SANDS because this is an issue that people don’t like to take about.”

The bereavement of a child is never easy to come to terms with and it can be the case that many suffer in silence, but the support of SANDS has been invaluable for the Carabine family and many others who have endured similar experiences.

“The ‘cold cot’ especially was something they did that has made a huge difference as we were able to cremate him and still have his remains,” Aidan added.

“There have also been meetings they put on to help people. I wouldn’t be one for talking, but Ellen has been to plenty of them where people can get together and talk about things or even just have a chat with someone individually.

"This isn’t a comfortable conversation, but there is help out there and SANDS provide great help. It’s maybe not something you realise at the time because you’re numb, but they have been such a help.

“We just thought it was time to speak about it and try to raise awareness of SANDS for all the great work they do.

“It also has a positive impact on people’s mental healthy – not just the parents, but also grandparents.”

During the St Stephen’s Day walk, Rossa will be asking for a small donation so that Sands NI can continue to fund the great work they do for all affected by baby loss. The event to date has been a great success with the support of many Belfast Gaels and those further afield.

Why not make it a family occasion and bring the kids along? There will be hot drinks and refreshments available on the day.

The route is approximately 5km long, but some have been known to round that down significantly! Either way, your presence and support will be greatly appreciated.

On the day, we will meet at the car park at 10.45am and head off at 11am sharp. Come and join us for what you will agree is a worthy cause.