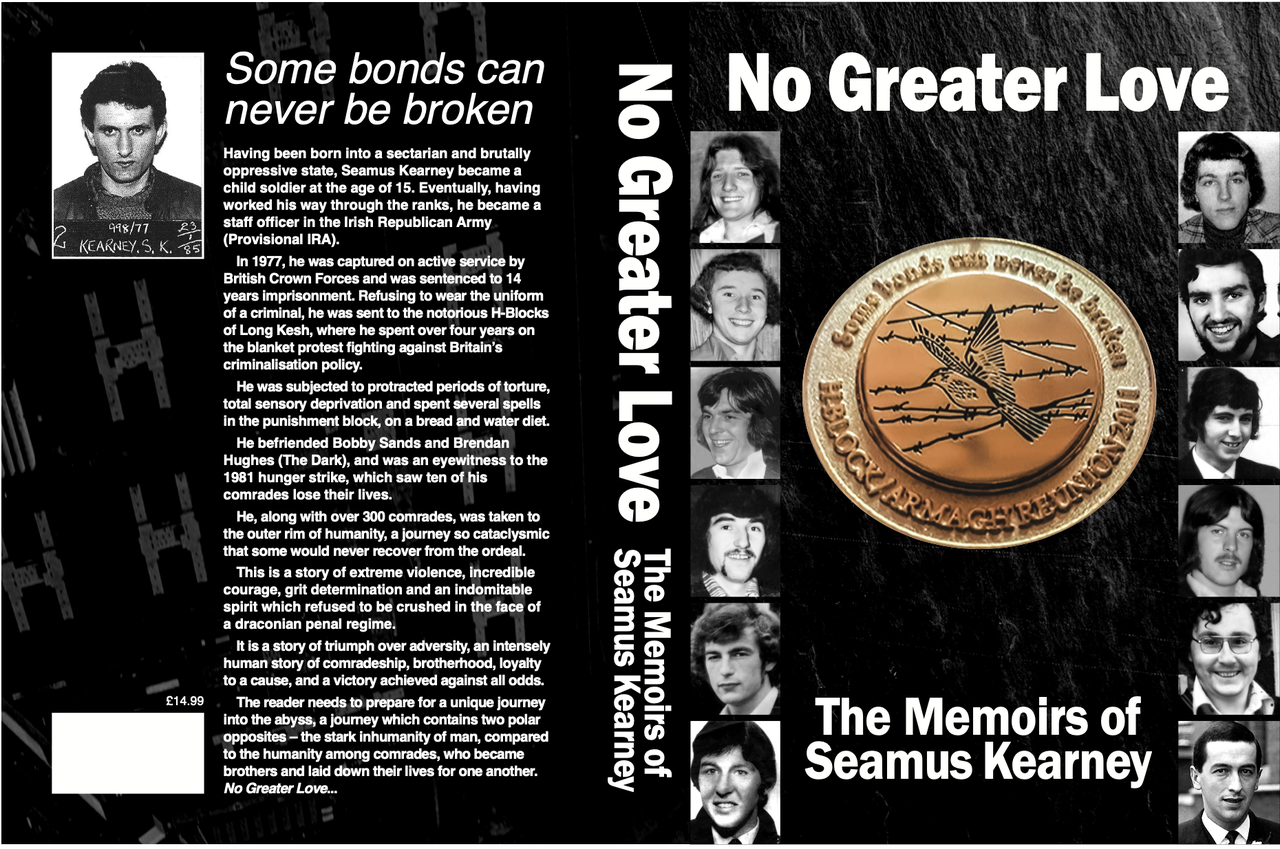 Seamus Kearney was arrested during an IRA operation in Finaghy Road North and was imprisoned in January 1977, and moved to the H-Blocks in June that year.

During his 10 years of imprisonment, Seamus – like the other blanket men – endured degradation, torture, and bore witness to the deaths of 10 men on hunger strike in 1981.

In a previous interview with the Andersonstown News, he recounted how the IRA had executed his brother, Michael Kearney, as an informer in July 1979. Despite this personal tragedy, Seamus remained loyal to the republican cause and to his fellow blanket men. It wasn't until 2003 when it was revealed that Michael had been killed at the behest of IRA informant codename Stakeknife.

Though having opened up about his experiences in recent years, Seamus' story was, and is, still largely untold.

He had made an agreement with his late wife not to speak about his time in the H-Blocks to avoid "prejudicing the kids". But when his own son, Thomas, began studying the period at school, questions soon followed that made the truth unavoidable.

A young Thomas' history teacher later asked why 10 men died on hunger strike, he was able to articulate that it was "because one brother laid down his life for another".

His reply was not to be found in his history book, because it "hadn't been written down by the men that were there". Seamus' new book is an attempt to do just that.

"I always wanted to set the record straight for the lads," he said.

Setting the record straight means bringing readers "right into the abyss", where the torture and the names of the torturers are laid bare.

"I'm naming the war criminals for the first time ever," he said. "I've had legal advice and the International Panel might get tested, because I want to see them (prison officials) in court."

After being "ordered over the mirror", he undressed and straddled the mirror as was the routine. However, as a POW, he "refused to voluntarily squat over the mirror". Instead he waited for guards to kick him "in the back of the legs, which was standard procedure".

When the blows didn't come, a notorious prison officer circled "with a wry smile on his face", Seamus' "legs began to tremble" and "he felt nauseated".

Praying for a "return to the relative safety" of his cell, he was ordered to "squat like a pig" over the mirror – an order he refused.

The officer left the room and returned with a "large heavy book in his hands" and proceeded to climb onto a chair next to Seamus.

The prison officer said: "Seamus, I believe that you've a head for books, so I want you to try this one out."

"He then began whacking the heavy book off the top of my head and told the screws watching to keep a count of the score," Seamus recounted.

"I locked in my knees and tensed my entire body as the heavy blows rained down on me, determined not to buckle for him.

"After 50 blows to my head I felt my legs weakening and my head becoming numb, but I could not please him and cry out.

It was after this gruelling experience that Seamus felt a "burning sense of hatred that I had never experienced before".

It was the depravation of certain screws that taught the blanket men the "ABC of hatred."

"We now understood, perhaps for the first time, what it was like to have hated within one's heart for an enemy," Seamus writes in the book.

"As a result, all emotion and the milk of human kindness was drained from our hearts towards our enemy. In their eyes we were mere animal, or sub-humans, so we had to descend into the abyss to fight them with the only weapon we had left; our own bodies."

The use of their bodies in that fight would culminate in deaths of 10 men on hunger strike in 1981, the blame for which Seamus lays firmly with “the British”.

Seamus finds it hardest to reflect on the death of his friend Thomas McElwee, who he knew from H4. But he recalled McElwee’s last message to his comrades, which were relayed through the prison priest Fr Tom Toner.

"He said 'tell the lads I'll not be too far away from them, and not to be bickering with each other,” Seamus stated.

“He said 'tell them they're brothers, behave like brothers'. He said 'I'll not be too far away from them, I'll not let them down, and I'll see this hunger strike through to the end.”

The loss, the pain, and the barbarity experienced in the H-Blocks are writ large in Seamus’ account but, ultimately, he said it is a “love story”.

“No Greater Love is not about hatred – it’s about love,” he said. “It’s about fellowship. It’s beyond comradeship.

“It’s about comrades who became brothers and who laid down their lives for one another, and there is no greater love than that.”

Seamus Kearney will launch ‘No Greater Love’ alongside his comrade, Jake Jackson, at Áras na bhFál in Belfast's Gaeltacht Quarter on Saturday (27 November) at 1pm. Standard Covid procedures will be in place.

The book will be available for purchase from Monday (29 November) at an Ceathrú Póilí book shop in Cultúrlan McAdam Ó Fiaich.