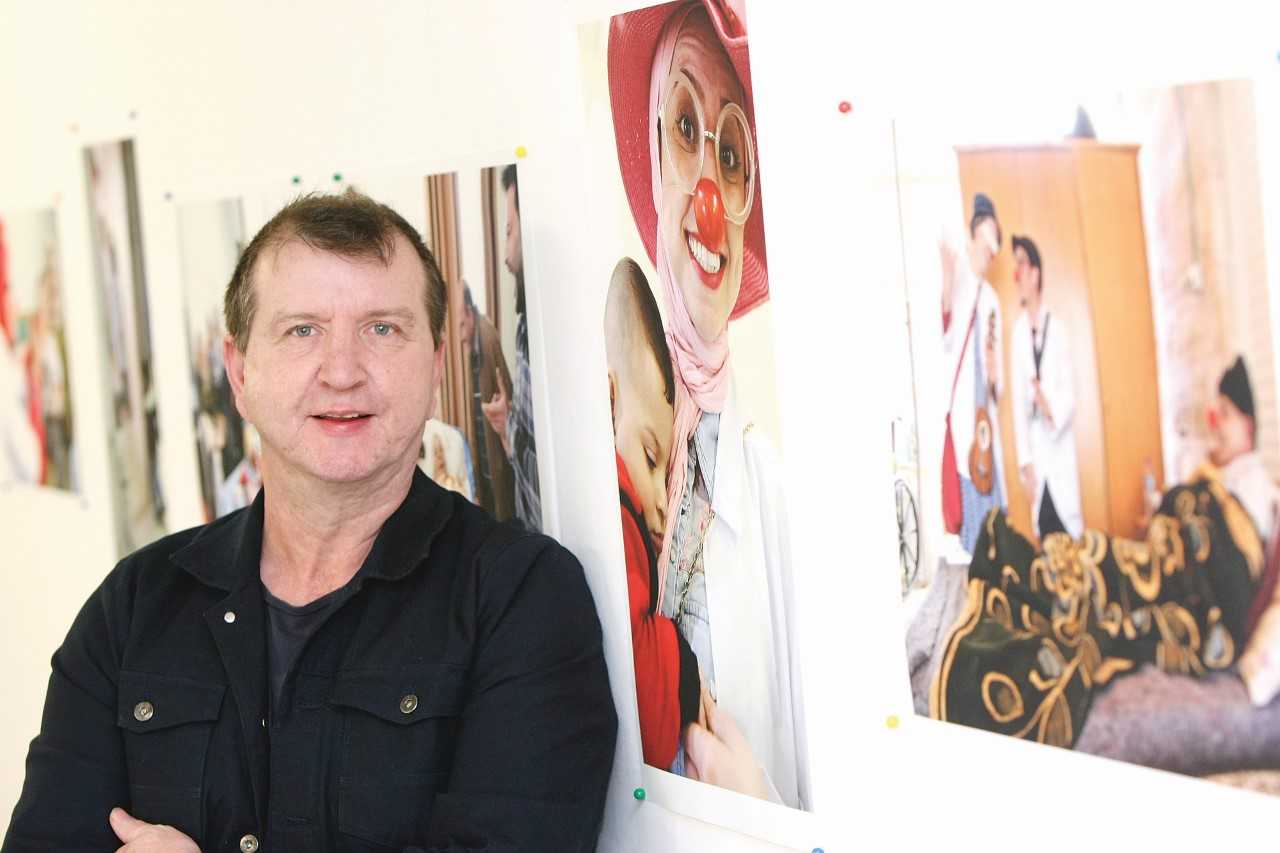 THERAPY: The work of Red Noses Palestine is the focus of an exhibition of photographs by photographer Sean McKernon

RENOWNED photographer Sean McKernon has launched an exhibition to help raise the profile of Red Noses Palestine, an artistic organisation which brings humour and laughter to children most in need of joy.
The co-founder of Belfast Exposed photography project travelled to Palestine over the past six months to document the extraordinary work of Red Noses Palestine.
“Essential health services are not easily available to the Palestinian population in the West Bank and the Gaza Strip particularly as a result of the conflict situation,” he explained. “By bringing humour and laughter into Palestinian hospitals, the Clown Doctors boost the resistance and willpower of their patients resulting in a special connection between the patient and the artist. The work of the Clown Doctors also brings a positive energy to hospital staff and patients families through enchantment and laughter.”
Sean visited hospitals in Jerusalem, Bethlehem, Ramallah, Nablus, Jericho and Tulkarm and witnessed at first hand the draconian system of movement controls enforced by Israel in the occupied Palestinian territories that has become increasingly institutionalised and restrictive. As a result children in hospitals are often left alone, families unable to visit and stay with them, causing critical problems for the sick child, which in many cases inhibits their healing process.
“There are 30 clowns and every day two would visit a hospital so that each hospital is guaranteed a visit on regular basis. They travel to every city in Palestine, except Gaza ironically, the one place they are perhaps needed most.
“They don’t just show up and announce themselves. They take time to speak to the doctors about each child and see who needed them the most and develop ways of helping children who were upset and isolated in January to laughing interactive child three months on. Its incredible just seeing how uplifting it is.”
Red Noses Palestine Artistic Director and Clown Doctor Tareq Alzabon was invited to officially open the Exhibition in Belfast with UK Visa and Immigrations being informed as requested in writing to confirm that travel and accommodation costs would be covered by the gallery and photographer. However, his visa was refused – a recurring issue, says Sean, for Palestinian representatives and activists. Part of the exhibition portrays general life in Palestine and the challenges that the local population has to endure due to severe restrictions on freedom of movement.
“At the notorious Israeli army-controlled Checkpoint 300 in Bethlehem people are treated like cattle in a narrow concrete and steel construction from as early as 3am for three maybe four hours to get into Jerusalem to work. Some of the young ones actually climb the rails and slide their way past the crowds out of fear of not making it on time. Sometimes the Israeli army stop letting people through randomly for five, maybe even 25 minute intervals and the fear and panic is revealed in the workers’ expressions that cramped conditions in 40-degree heat might have been for nothing. It just shows what people take for granted, suddenly a 30-minute black taxi commute to work or fear of having your bus arrive five minutes late seems insignificant in comparison.”
Sean hopes that the exhibition will help raise the profile of Red Noses Palestine and hopefully inspire Belfast community and voluntary groups working with children in hospitals, general health care and dealing with the effects of conflict and trauma if and when Tareq is eventually granted a visa.
The exhibition is on display at ArtCetera Studio Gallery, 43b Rosemary Street, Belfast BT1 1QB, until Saturday, April 28.