Seb took his own life 5 days after cops raided flat 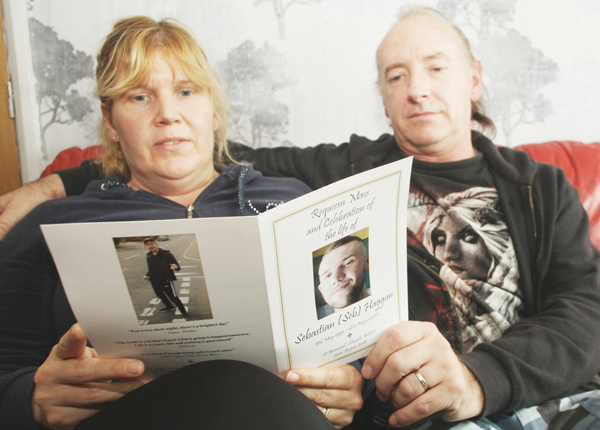 A GLENGORMLEY couple who lost their son to suicide says the system is failing people with mental health issues.

25-year-old Sebastian ‘Seb’ Haggan took his own life a month ago with a suspected heroin overdose.

Dad Billy and mum Sharon say they “tried everything” to help their son after he turned to drink and drugs before he took his own life after three previous attempts.

Speaking from the family’s Elmfield home, Billy told the North Belfast News how Sebastian’s life had spiralled out of control.

“Sebastian had his mental health issues since he was a kid,” explained Billy.

“He lost his baby brother Joshua in 2002 and then when his grandparents died, it hit him hard.

“We were told he had to be re-assessed but at the end of the day, he was suffering from the same issues. He just went from a child to an adult.

“As he grew up as an adult, he turned to a spiral of drink and drugs. He thought it was helping him but in reality it wasn’t. He didn’t know when to stop.

“His doctor wrote him a letter, basically saying could he be housed in some sort of sheltered accommodation. It never happened.

“As parents, we were desperate. He was either sitting in his room or out on the drink and drugs.

“He couldn’t get out of the loop he was in. He needed serious help and he just was not getting it. It was a constant cycle that was going downwards. He needed professional help to deal with the grief he suffered.”

In April, Billy and Sharon were told by Social Services that it was not safe for Sebastian to live in the family home with his younger brother (9) and three sisters, (11), (14) and (22).

“As if putting him on to the street was the solution for a vulnerable adult who has addiction and mental health problems,” added Billy. “Social Services’ attitude was basically Sebastian is out of the house and the kids are safe. Now their big brother is dead. They are going to need counselling. It is just a vicious circle.

“We are terrified of a knock-on effect. What if someone else in our family decides to take their own life? We were given no help to find him somewhere. We had to find him some sort of sheltered dwelling to live in.”

On August 13, Sebastian’s West Belfast flat and the Haggan family home were raided by police who claimed they had a warrant to search for ammunition and weapons. The family have complained about the searches to the Police Ombudsman. Sebastian took his own life just five days later and Billy believes the raid set him over the edge.

“Sebastian was out on the streets again after the raid when his landlord put him out. I got him sorted with a place in Ballymena. Five days after the raid, he killed himself. I think it was a trigger – he just could not cope with any more stress.

“He was found with heroin paraphernalia lying around him. We are still waiting on official confirmation but it seems pretty likely he took a heroin overdose to end his own life. Earlier this year, he told his sister the best way to commit suicide was a heroin overdose. He was right.”
Billy and Sharon have criticised the system which they say is failing people suffering from mental health issues.
“Sebastian needed professional help but it just was not there. We begged for help from a psychiatrist and for him to be sectioned but nobody would do it.

“We think he attempted suicide on three occasions before. After the second attempt when his sister rescued him from jumping off a bridge, the hospital said he was ‘stable’ and that he ‘wasn’t that bad’.

Sebastian himself was willing himself to get help. What more did he need to do? He’d just tried to take his own life. The authorities need to listen to families who are suffering. The system has crashed, it simply does not exist. Hospitals just cannot deal with the issue.

Politicians need to start doing something. There is a deluge of mental health patients at the moment and basically no help out there for them. Nobody seems to want to tackle the problem. More mental health staff and teams are needed.

“We tried everything we could. At the end of the day, Sebastian was the one who injected himself and killed himself but it all goes back to mental health issues.

“We won’t be the last family to suffer. I wouldn’t like to think what the total number of suicides will rise to. There are more people killed by suicide than on the roads now.”