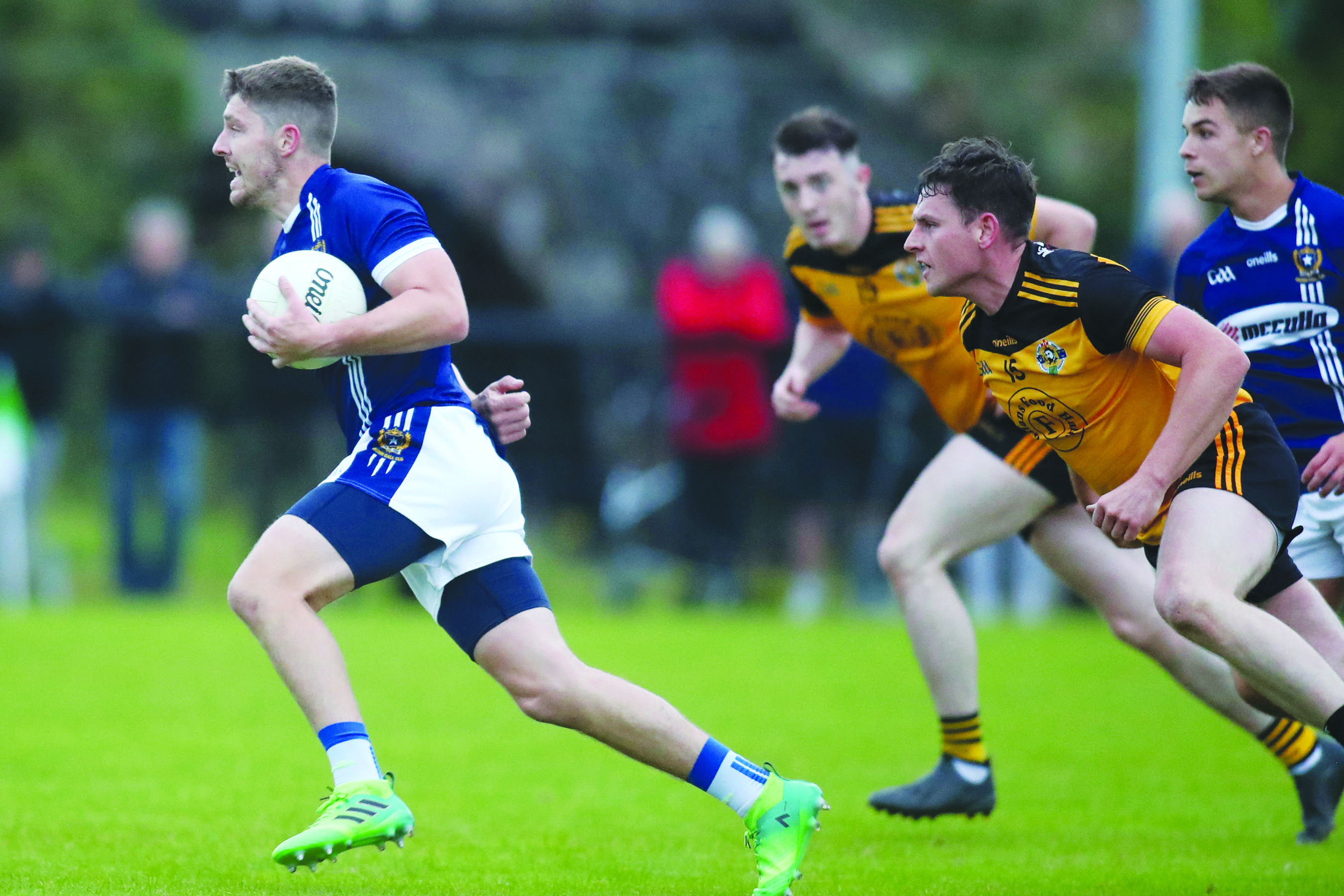 PORTGLENONE clinched a dramatic penalty shoot-out win over St Gall’s in the dying light of a remarkable and controversial Antrim Senior Football Championship quarter-final at Dunsilly on Tuesday night.

The St Gall’s management team were unhappy with a number of decisions made by referee Eamonn McAuley – not least the call to dismiss substitute CJ McGourty for dissent.

After the game, St Gall’s manager Paddy Murray claimed the remark which led to McGourty’s removal from the sideline came from a spectator.

“It was a tough game and it felt like we were playing against 16. On many occasions in the game, there were some harsh decisions given against us,” said Murray.

“We were prepared for that, but it is still difficult. Fair play to Portglenone, they hung in there. It is never nice to lose on penalties, but good luck to them in the semi-finals This is a rebuilding process and St Gall’s will be back stronger next year.

“I was there and CJ (McGourty) didn’t say anything - it was a spectator behind him. I was witness to that and I mentioned it to the referee. The linesman was in agreement with me and I asked him to bring it up with the referee. That was a particularly harsh decision on CJ.

“Unfortunately, we weren’t able to use CJ during the course of the game and he would have been a great asset for us. At least the game was recorded and people can see those decisions for themselves.”

He added: “We feel hard done by, but you can’t fault the players. Credit to our lads and credit to Portglenone, they did their club proud.

“It was a great game of football and those watching live we treated to an exhibition of football from some great players. I’ve no issue with Portglenone - our issues are elsewhere.”

Portglenone suffered setbacks of their own with the loss of captain Niall McKeever to injury after 24 minutes while full-forward Dermot McAleese looked to be concussed when he was withdrawn just before half-time.

St Gall’s then gained the upper hand, thanks largely to craft of Kevin Niblock, who was proving a handful for Ronan Delargy. The former Antrim skipper fisted over a point after midfielder Sean Burke had given St Gall’s the lead with a great long-range effort. Niblock then got on the end of a fine pass from Sean Kelly to put St Gall’s 0-5 to 0-2 up.

Louis McCormick was called into action to make a smart save to deny McAleese midway through the first half with Delargy converting a free to cut the gap to two.

A series of frees awarded to Portglenone drew howls of disapproval from the St Gall’s supporters, but referee McAuley stopped play to order CJ McGourty from the sideline before Oisin Doherty had a mark moved forward 10 yards.

Conal Delargy and Michael Hagan added further frees either side of a point at the other end from Terry O’Neill to tie the game at 0-6 each with half-time fast approaching.

Kieron McKenna was almost in for a goal after Portglenone intercepted one of McCormick’s restarts with Hagan’s attempt at goal being blocked by Shane O’Hagan and McKenna couldn’t keep the rebound low enough, but it did nudge Portglenone back into the lead.

St Gall’s replied with back-to-back points from Bradley, one from a free and one from play to move 0-8 to 0-7 in front in stoppage time.

On the cusp of the half-time whistle, an effort from Niall Delargy was waved wide by the umpire on the near post, but the second umpire indicted it was a point and McAuley deemed the score stood to leave the sides level at the break at 0-8 all.

The intensity levels didn’t dip for the second half with every break being keenly contested and Bradley converted a free on the restart to move his side into a lead which lasted less than a minute.

Having replaced Dermot McAleese at the end of the first half, Ronan Kelly got Portglenone’s first score of the second half.

A rally of four unanswered points looked to have given St Gall’s a decisive advantage.
Niblock got things rolling when he took a pass from Bradley before twisting left, then right to evade his marker and firing over a great point.

He then turned provider for McCabe’s first point of the night while two points Mickey Pollock, including one superb effort with the outside of the right, moved St Gall’s 0-13 to 0-9 ahead.

The introduction of Paddy Kelly gave Casement’s a much-needed physical presence around the middle third in the absence of McKeever.

Hagan’s first from play trimmed the gap to three, but some of the frees given were baffling, notably the one which earned St Gall’s defender Shane O’Hagan the harshest of yellow cards.

Portglenone then drew level with scores from Doherty and Delargy (free) before McCabe landed his second of the night with 10 minutes of normal time remaining.

Back-to-back frees converted by Delargy and Kelly moved Portglenone into a one-point lead and a Hagan point from play on 58 minutes looked to have sealed the win for Barry Dillon’s side.

A point from Niall O’Neill gave St Gall’s a fighting chance on the hour mark, but they looked to have squandered the opportunity to force extra-time when Gallagher opted to shoot for goal late on with Ryan O’Neill making a good save.

However, a Bradley point on 63 minutes tied the game at 0-17 all, after the corner-forward dropped a 35-yard free short moment earlier.

St Gall’s failed to score in the first period of extra-time with points from Delargy (free) and Kelly moving Portglenone two ahead, while St Gall’s lost defender John McCaffrey to a black card for a 10-minute spell.

Yet, a late St Gall’s rally looked to have sealed the win in the second period as they hit four points from Mickey Pollock and Kevin Niblock along with two frees from Bradley with a fisted effort from Gerard McAleese being Portglenone’s only reply.

Casement’s ended the game with 14 players when Ronan Delargy was shown a black card for a third-man tackle on Pollock.

However, when Bradley crashed another free off the posts, Casement’s took full advantage with Paddy Kelly holding his nerve to convert a 45-yard free in stoppage time of extra-time to bring the game to penalties.

The daylight was all but gone by this stage as the teams made their way to the goals Portglenone had attacked in the second half and Dillon’s side were exceptional in the shoot-out – scoring all five penalties.

St Gall’s opted to use Niall O’Neill in goals rather than Louis McCormick, but O’Neill got a hand to Paddy Kelly’s penalty, yet couldn’t keep it out. Conal Delargy, Ronan Kelly, Hagan and Kieron McKenna were all successful from the spot while Pollock had his penalty saved by Ryan O’Neill with Aodhan Gallagher, Eoghan McCabe and Bradley converting their penalties.

Portglenone will meet Creggan in Saturday’s semi-final having already met Kickhams twice in the group stages in what is turning out to be another fascinating Antrim Senior Football Championship campaign.