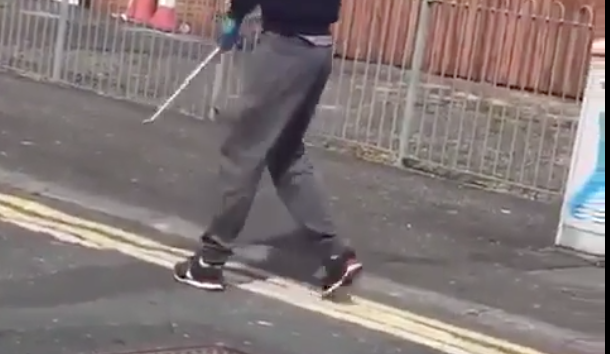 Knives and iron bars were brandished by a gang of men who attacked a house in the Market area yesterday.

The attackers are being linked to a Short Strand gang.

While no-one was injured in the attack, windows were broken and death threats issued.

Said one local person who asked not to be named: "This was over an argument which goes back at least two years. These gangsters are a law unto themselves."

Video of the attack captured on smart phones by local people appeared on Facebook and Twitter within minutes of the incident.

Chief Inspector Gavin Kirkpatrick said: "We received a report just before 2:20pm yesterday afternoon (Thursday, 23rd April) in relation to a number of persons in the Friendly Street area of Belfast who were reportedly armed with what was described as knives and bats.

"Our officers attended the location where criminal damage had been caused to a window and door of a property. No one is believed to have been in the property at the time and no injuries have been reported to us.

"Enquiries are underway to establish a motive for this incident and I would appeal to anyone who was in the area this afternoon and saw what happened to get in touch with us.

"We are aware of video footage circulating on social media and would appeal to anyone who may have captured footage of this incident to contact us on 101, quoting reference number 909 of 23/04/20, or call Crimestoppers anonymously on 0800 555 111."