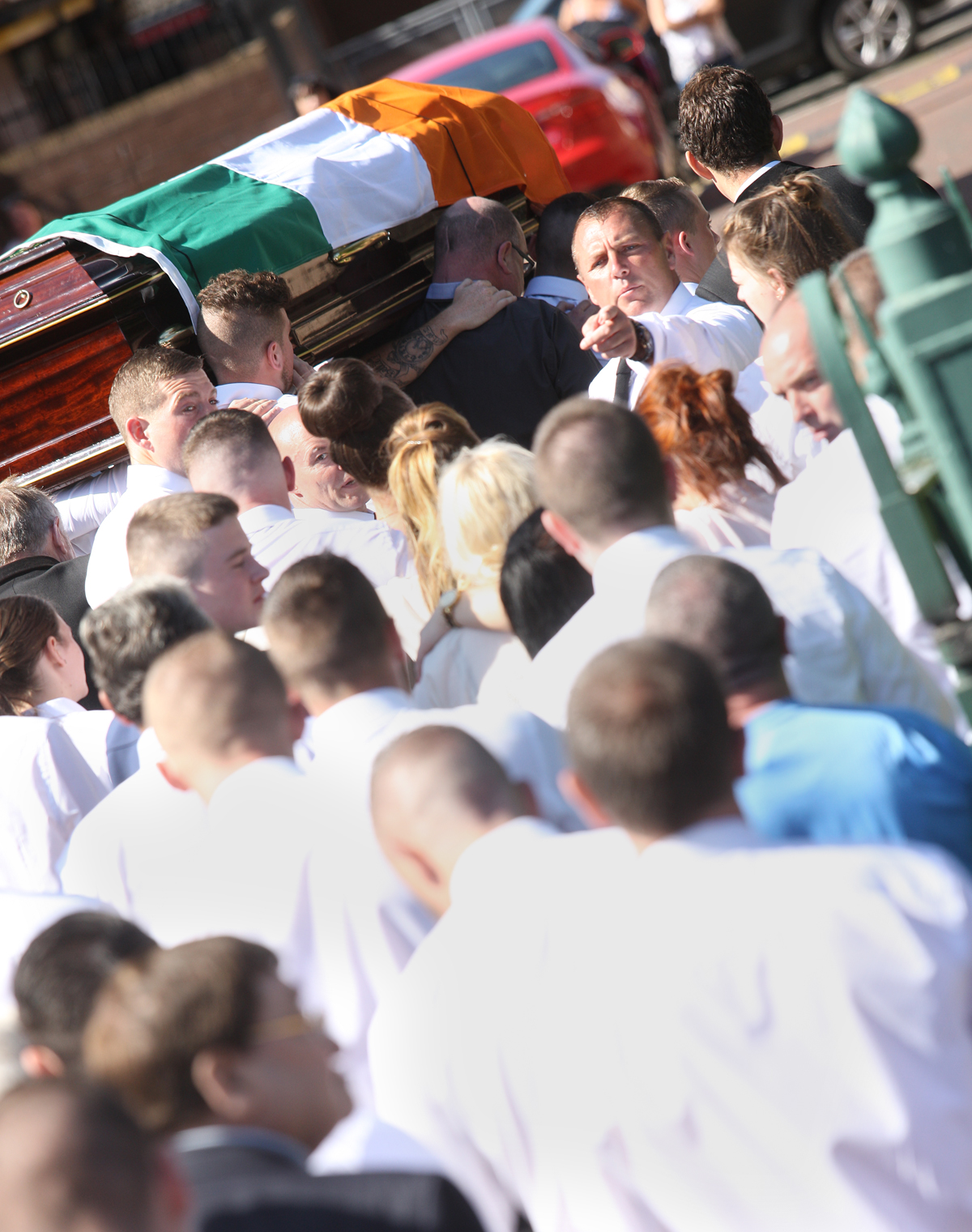 The funeral of Kevin McGuigan in the Short Strand on Tuesday

There’s been a widespread and heated response by political parties to a press conference given by the PSNI yesterday in which it was claimed that the Provisional IRA carried out the killing of Kevin McGuigan.

Sinn Féin MLA Gerry Kelly has denied claims that the IRA is still in existence and says the gang police believe carried out the killing of Kevin McGuigan are not republicans.

His words have provoked a political storm, with unionists flagging up the possibility of Sinn Féin being excluded from the power-sharing institutions at Stormont. Sinn Féin, though, are highlighting the apparent confusions contained in the senior policeman’s words.

"The IRA has gone, it has left the stage, it made a statement in July 2005, saying it was gone,” said Gerry Kelly, who described the police statement as “contradictory”. He went on: “In his statement Detective Superintendent Geddes said that AAD, Action Against Drugs, was the organisation he believed was involved. I am a republican. I am saying this is a criminal gang. I think I may have the credibility to be able to know the difference."

Deputy First Minister Martin McGuinness said those who killed Kevin McGuigan and Jock Davison were criminals and "must be brought to justice".

First Minister and DUP leader Robinson said Sinn Féin would be put out of the power-sharing institutions if it was proved the Provisional IRA killed Kevin McGuinness.

"There can be no place for terror and murderous activity on our streets and republicans cannot be in the executive in circumstances where this murder was the work of the Provisional IRA,” he said.

SDLP leader Alasdair McDonnell said he’s concerned at the suggestion that the IRA may still be in existence and active.

“I welcome this assessment by the police  which is compatible with what people on the street already know,” he said.

“The Provisional IRA, in whatever form it exists, despite whatever contortions it may have gone through, still appears to claim the right to exercise life and death decisions over anyone in the community that they develop a grudge against. Kevin McGuigan’s murder was barbaric – it was totally unacceptable and unjustified by any civilised standards. We will now be seeking a meeting with the Chief Constable as a matter of urgency.”

Alliance leader and Justice Minister David Ford said: "This is at the very early stage of an inquiry into an absolutely appalling murder with a family still grieving just a day or two after they buried their loved one. What we need is information, proper intelligence, so the facts can be established by the police and then the political implications will need to be considered if there are links to the IRA."

A man appeared in court earlier this week charged with possession of a weapon after being arrested in a raid carried out by police investigating the McGuigan murder.

A 60-year-old man was arrested this morning in connection with the murder. Eight other people held, including senior republican Sean Kelly, have been released unconditionally.