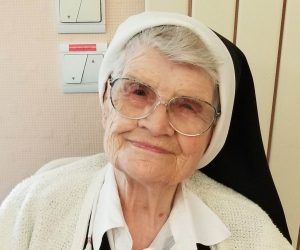 A Marianite nun who hailed from the Lower Falls has passed away at the age of 107.

Sister Martha, formerly known as Joanna Lindsay, died in the care of the Marianite sisters in Le Mans, France, on 1 October.

Born in Belfast in October 1913, Joanna entered religious life as young woman, taking the name Sister Martha, and spent the greater part of her life in France. Her family had lived in Massereene Street in the Lower Falls area.

She was the brother of Robert Lindsay, a young man with a physical disability and learning difficulties, who was shot dead in disputed circumstances on the Grosvenor Road on 25 October, 1971.

Pól Wilson, whose father Leo Wilson was Sister Martha's cousin, said the family had lost contact with her in recent years.

A photo of Sister Martha alongside her sister Cassie and her mother, Mrs Lindsay, is one of the few mementos the family have of her.

Upon hearing of her death, Pól has written to the Marianite sisters in a bid to fill in the blanks of her long life.

"I was born in 1956 and I have a vague recollection of her coming to visit our house when we were young," he said.

"She was what we would've called 'the butterfly nun' because of the big wide-rimmed veil that they wore.

"In terms of the photograph, I imagine the family would've had it taken because her visits home were very rare."

"Because there had been no contact with her for a while we were under the impression that she died years ago," Pól continued.

"In late 2013 there was a wee square notice on a newspaper that said 'Sister Martha', and it was from a group of friends congratulating her on her 100th birthday. I had done a search then and got an address for the Marianite sisters and sent a card. Three times I sent it and it came back saying 'address unknown'."

"I couldn't find any online contact details for them, but every now and again I would do checks to see if something came up about her. Ten days ago I was doing a check as normal and it came up on the website that she had passed away."

After contacting the Marianite sisters' central office, Pól has received an address for Sister Martha's convent and hopes to uncover more detail about his relative.