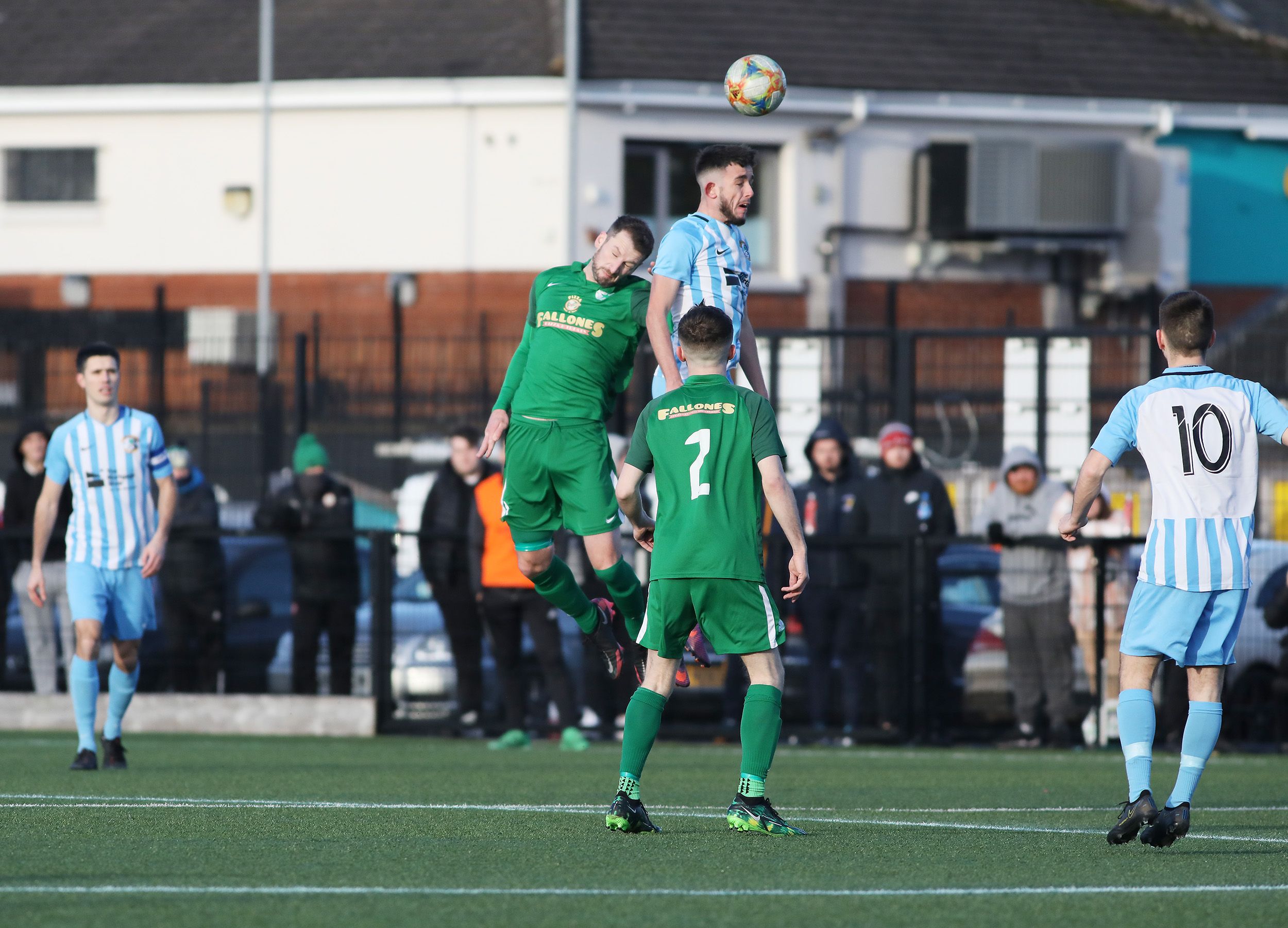 A JOE McNeill strike midway through the first half was enough to secure all three points for Crumlin Star at the expense of Immaculata at the Cricky on Saturday.

The hosts also missed a penalty when skipper Barry McKervey saw his well-struck effort superbly turned away by Mac ’keeper Daire McAuley, who was in fine form all afternoon.

Yet, Star were probably fortunate not to concede late on as Immaculata substitute Francis Dugan spurned a glorious chance to salvage a point for his side in stoppage time.

The win keeps Star hot on the heels of league-leaders East Belfast with only goal difference keeping the current champions in second place.

The visitors enjoyed the better of the early exchanges and settled into the game much quicker.

Some brilliant last-ditch defending meant that Dean Smyth wasn’t called into action. Excellent passing between Brian McCaul and James Haughey sent Ben McCaul through on goal on 15 minutes, but Aidan McNeill made a fine tackle inside his own box and cleared the danger.

Gary McVicker ought to have tested Smyth when he unleashed with a rasping effort from outside the box minutes later.

Just when Immaculata looked posed to break the deadlock, they were caught at the other end.

A free from McKervey into the box was flicked on by James Doyle and the Mac were too slow to clear their lines and Joe McNeill was on hand to smash the ball home from six yards out.

The goal seemed to spur the Star on and McAuley was called into action to make a save from another McKervey free-kick.

Stephen Smyth was also becoming more of a threat down the left flank and he won a free for his side with Patrick McIlkenny then trying his luck from the edge of the box, but McAuley was equal to the shot as the sides went in at the break with Crumlin Star leading 1-0.

The second half started much like the first ended with Star pressing hard for a second goal.

On 54 minutes, they were awarded a penalty when Smyth was pulled back in the box by Colm O’Riordon.

McKervey stepped up to take the penalty, but McAuley got down low to his left to make a stunning save to keep the game at 1-0.

Just after the hour mark, Immaculata made a double substitution in order to inject some impetus into their challenge and Francis Dugan and Adrian Oliver looked lively when introduced.

Indeed, Dugan could have equalised on 70 minutes when he played a one-two with Haughey before shooting from the edge of the box. Having gone for precision over power, his effort drifted narrowly wide of the target.

With 10 minutes of normal time remaining, Star thought they had the game wrapped up when Smyth played a delightful flick on to Sam McBurney, who let fly with a crisp effort off his right boot.

The ball looked destined for the top right-hand corner. Yet, McAuley had other ideas as he pulled off another majestic save to deny an exacerbated McBurney.

If Star were frustrated at not killing the game off, they can count their blessings they weren’t caught out in injury-time.

With the last chance of the game, McVicker’s long delivery was taken down and controlled with an exquisite first touch from Dugan. With the goal seemingly at his mercy, he sliced his shot horribly wide and the chance went abegging.

The West Belfast men will have to dust themselves down for next week’s trip to Border Cup winners Derriaghy while Crumlin Star are also on the road next Saturday as they take on Killyleagh.