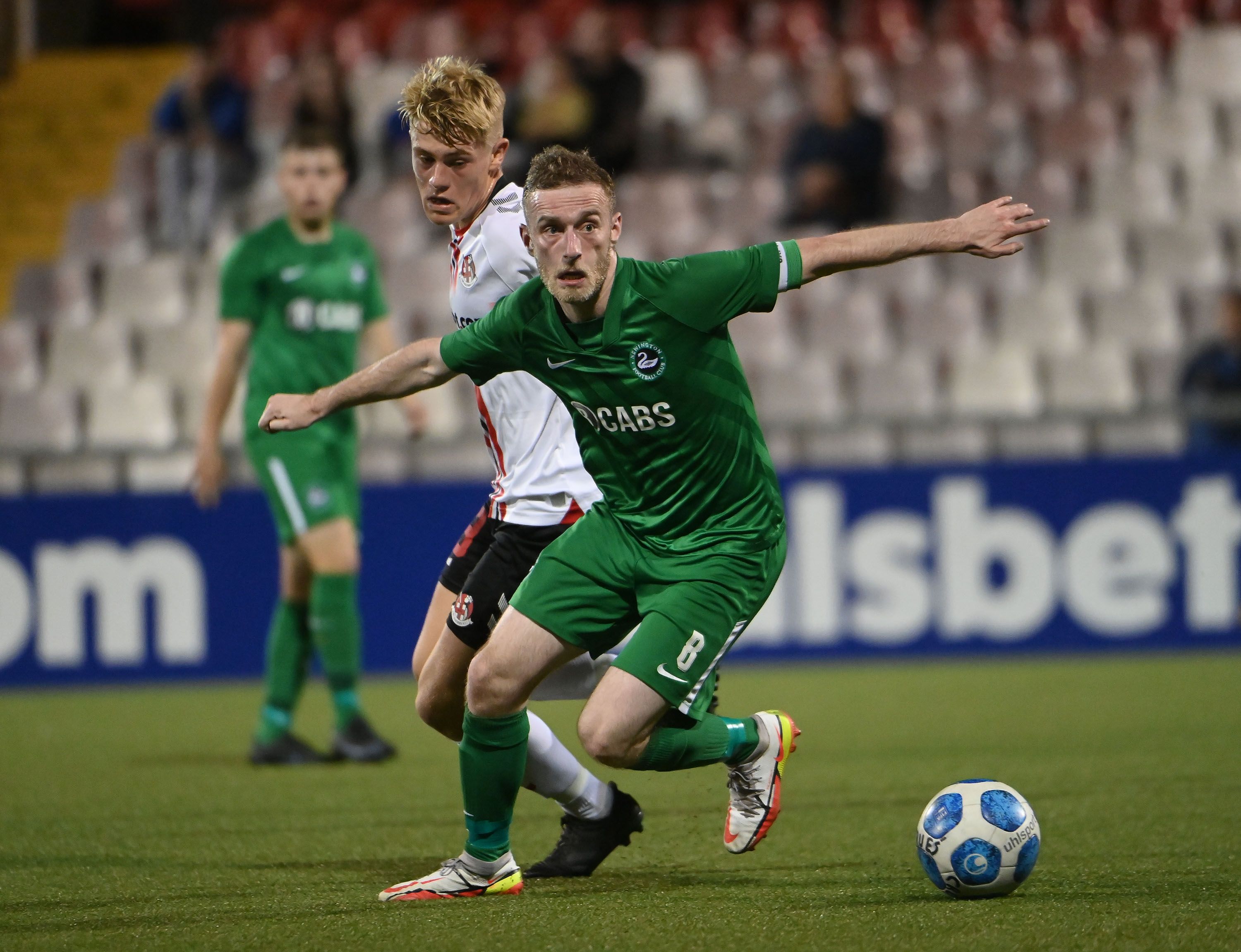 DUNDELA hosted Newington in the NIFL Championship at Wilgar Park on Friday, as the home side looked to close the gap on league leaders Loughgall to just three points; ahead of their trip to Dergview on Saturday afternoon.

Newington, who have managed just one win in their last five, would have been desperate for all three points as they hope to turn around a run of form which has left them languishing above the relegation and play-off spots.

As the match began, and perhaps desperate to avoid a repeat of last week’s disastrous start at home to Loughgall, the Ton came flying out of the gates and immediately on the front foot, as midfielders Patrick Downey and Neil Cummings dominated the early battles in the middle of the park.

It wasn’t long before the North Belfast side’s ferocious start was rewarded, as Matthew Gorman was the beneficiary of some calamitous defending from Dundela.

A long throw left the Duns’ goalkeeper and backline falling over themselves, allowing Gorman to nip in front of a Dundela defence, who hadn’t yet shown up, and poke home from just six yards out. 1-0 to Newington, and finally something for Paul Hamilton’s side to defend.

The Newington opener proved to be a wakeup call for the home side; two glorious chances in quick succession for Dundela should have seen them take the lead, however impetuous finishing and an unfortunate ricochet off his own teammate from Fyfe and Magee respectively; with the former having much more time than he realised, 12 yards from goal and the net at his mercy – the midfielder opted for power rather than precision and could only watch his effort sailed past the post.

Moments later, and largely against the run of play, it was Newington who would strike – another defender, this time it would be Fra Brennan’s turn to make the home side pay for their poor start. A routine corner allowed the central defender to beat his man at the near post and glance the ball into the corner of the net. 2-0, and barely 15 minutes on the clock.

Crazy game of football last night, the lads secured a 4-3 win in a game that could of ended 7-7. Goals from Gorman, Brennan and a Downey free kick put us 3 ahead. The duns pulled. Goal back either side of the break before Warwick sealed the win late on.

Two minutes later and Paul Hamilton must have been thinking all his Christmases had come at once, as his side managed to steal a third. This time a long ball over the top caused confusion between the Dundela backline and goalkeeper Neil Shields – who found himself in goalkeeping purgatory on the edge of his box as the ball bounced over the head of Robert Magee.

Shields, after some deliberation and plenty of screaming from the bench, elected to come for the bouncing ball – however, and rather unfortunately for the shot-stopper, his momentum just managed to carry him outside the box.

A free-kick to Newington in an extremely dangerous position, and a yellow for the red-faced Shields. Up stepped Patrick Downey, who sought to take advantage of the Dundela wall which was without the recently popularised draught excluder. The midfielder tucked the ball expertly under the jumping wall and into the bottom left-hand corner. 3-0 to the Ton.

Groans of anxiety from the away stand as well as a pressing sense of urgency from the home side suggested that, despite the score line, the match was far from over; and in the 35th minute the travelling fans’ worries were justified.

It was to be the combination of Dobbin and Fyfe who would eventually unlock the Ton defence. An exquisite first touch from Dobbin took him away from defender Jack Reilly before goalkeeper Maybin, perhaps regrettably, came rushing out to close down the Dundela winger. This left Fyfe with the now simple task of cutting it back for Dobbin to head into an empty net. 3-1, and Dundela now with a foothold in the match.

As Paul Hamilton screamed from the touchline for his side to get to half-time with their now two-goal lead intact, there was time for one last moment of panic.

Dundela full-back Ryan McKay found himself inside the Newington box as the home side continued to press.

The left-back’s footwork proved too much for Newington defender Gorman, as the big number 4 was a fraction too late with his challenge inside the area. Penalty to Dundela, and zero protests from the away fans. Dennis Irwin, Sergio Ramos and now Anthony Kane – the short, and exclusive, list of penalty-taking defenders. Unlike the aforementioned duo, however, the defender could not manage to convert his spot kick, but instead watched his effort crash off the wrong side of the post and out for a goal kick. 3-1 at half-time.

Ten minutes into the second half and the home revival that Paul Hamilton’s men would have discussed preventing during the half-time break, seemed to be underway.

This time it was provider turned goal scorer, as it was Dobbin’s turn to make his contribution to the Dun comeback. Some lovely one-touch football from the home side allowed Rhys Annett to get in behind Reilly and deliver a perfect first-time cross onto the right foot of Dobbin, who showed great desire to get ahead of his man and poke him for Dundela’s second. 3-2, and the momentum was firmly with the home side.

It's often difficult for substitutes to find their feet late on in a match, especially being thrown in in the middle of a five-goal thriller.

However, for substitute Michael Morgan this was certainly not an issue. The striker wasted no time in finding his rhythm, following his introduction just after the hour mark.

The Dundela defence, who had largely been untested in the second half, were now finding themselves in the middle of an extremely physical battle with the forward, who was once again determined on sending a message after being left out of the starting eleven.

A few aerial battle victories, some terrific hold-up play and a Cruyff turn, all from Morgan, proved to be the catalyst for a much-needed Newington fourth. Intricate passing on the edge of the box from Warwick and Morgan provided the latter with just enough yards to get a shot away from the edge of the box. The effort could only be parried by goalkeeper Shields and allowed Darren Stuart to latch on to the loose ball before cutting it back for Gary Warwick, who showed great composure to tuck it away and all but put the game to bed.

There was just enough time to cause a few final nail-biting moments in the away dugout, as Dundela managed to nick a goal in stoppage time.

This time captain Robert Magee rose highest from a corner to give his side a glimmer of hope as they searched for an equaliser in the remaining seconds. However, it proved to be too little too late for Magee and Dundela, symptomatic of the east Belfast side’s evening whose slow start in the first half gave themselves a mountain to climb.

A win for Annagh United in Friday night’s other NIFL Championship match means Dundela now drop down to third place. For Newington however, this win for Paul Hamilton’s men gives his side a little bit of breathing space between themselves and the bottom of the table. 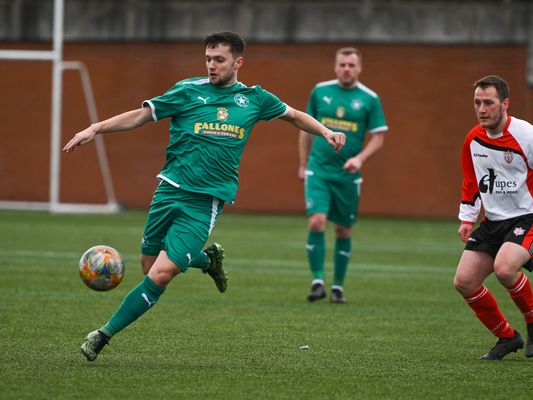 Soccer: Crumlin Star thrash Killyleagh to move up to second 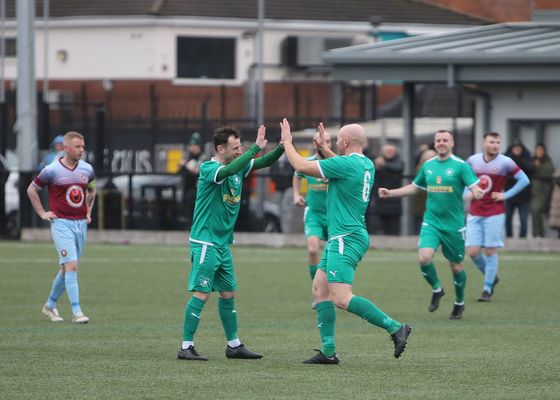 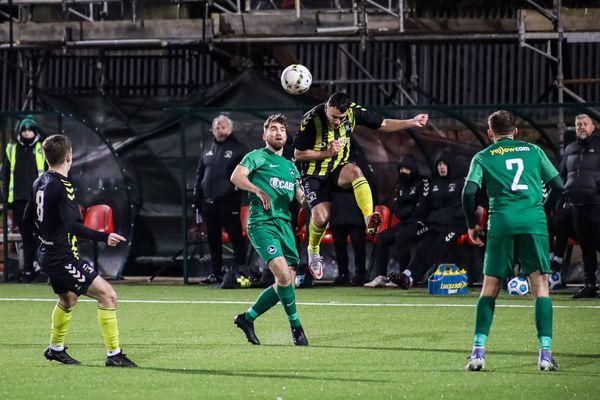