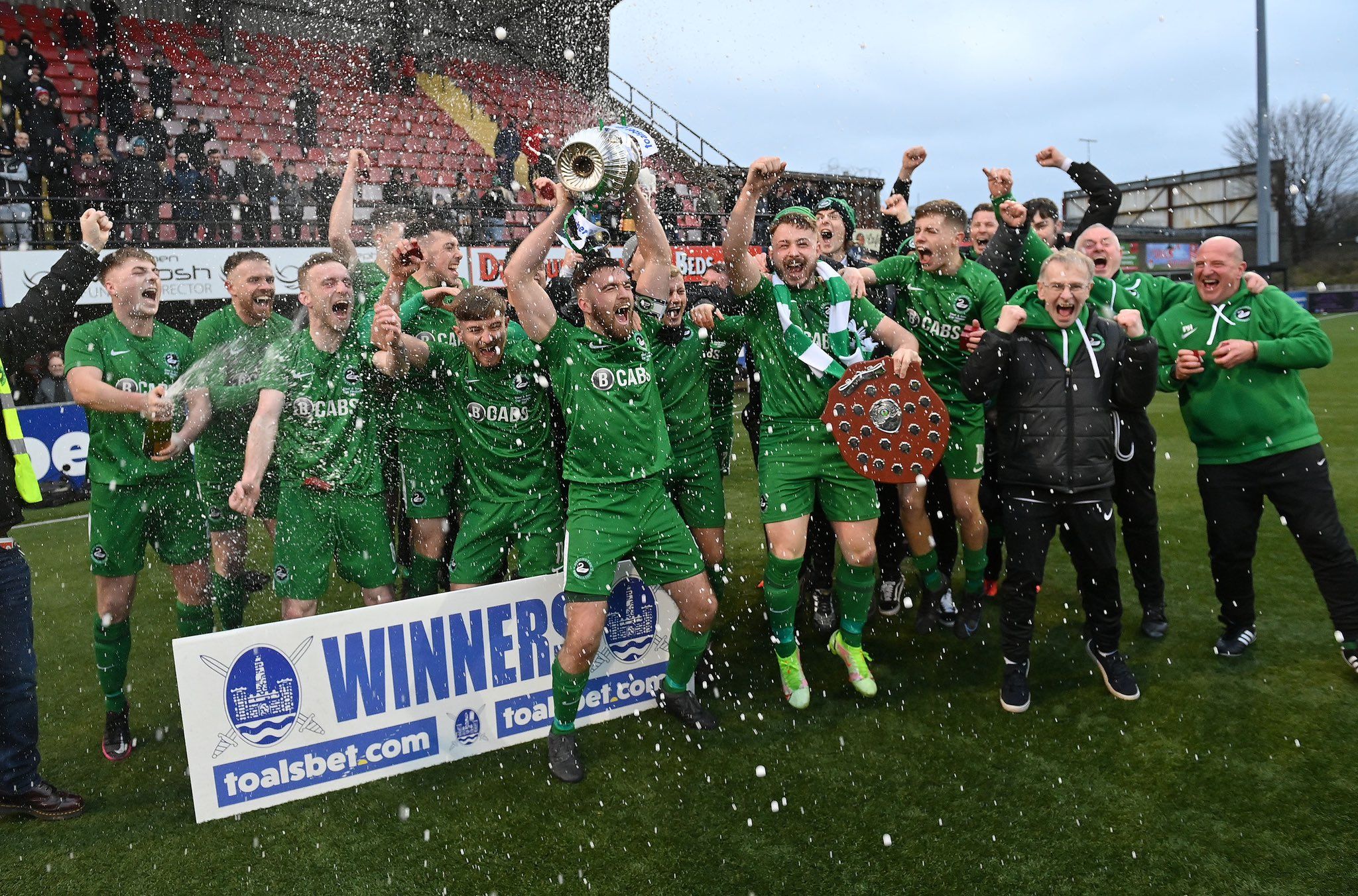 NEWINGTON lifted the Steel and Sons Cup for the second time on Christmas morning thanks to a 1-0 win over Linfield Swifts at Seaview.

Aodhán Gillen fired home what proved to be the only goal in an entertaining contest just before the hour mark following a great pass from Man-of-the-Match Robbie McVarnock.

The Swifts pushed for an equaliser late on, but Newington were deserved winners on the day.

The North Belfast side won their maiden Steel and Sons title back in 2017 with 1-0 win over the Swifts while David Dorrian’s men emerged victorious when the sides met again in the 2019 decider.

Linfield were the better team in 2019, but they came up against a much-improved Newington outfit in this year’s final and the full-time score doesn’t reflect how dominant Paul Hamilton’s side were.

Speaking after the game, the Newington boss paid tribute to the collective effort of everyone involved at the club.

“Our support was fantastic. They came down here today and we didn’t let them down.
“Linfield are a great team and we’ve huge respect for them, but we were going to win this – we were determined to win this.”

Right from the off, Newington showed an eagerness to bring the game to their opponents with Hamilton’s men having the best of the early chances despite playing against a strong wind.

Gary Warwick’s diving header forced David Walsh to make an early save while Richard Gowdy fired over the crossbar from the edge of the box.

The Swifts then demonstrated how dangerous they can be on the counter when they cut through Newington with some delightful one-touch football from Ewan McCoubrey, Callum Marshall and Adam Carroll. However, the final shot from Andrew Thomas Clarke was blasted over the bar.

Midway through the half, McVarnock tried his luck with a blistering effort from 40 yards which Walsh had to tip over the crossbar while Daniel White missed the target minutes later from a shot from the edge of the box.

At the other end, Marc Maybin was called into action on 27 minutes when Marshall’s pass sent Jack Montgomery through on goal, but Maybin was equal to the shot.

Newington upped the ante in the final 10 minutes of the half in search of the opener.
However, they were tharwted on several occasion by the brilliance of Walsh.

On 37 minutes, he made a superb save to Patrick Downey, but the best chance of the half fell to Newington midfielder Conal Burns just before the break.

A cross from Burns himself wasn’t cleared and Newington looked to be queuing up to score, but nether Gillen or Warwick could get a shot away and the ball broke for Burns at the near post.

Yet, Burns drilled his shot into the side netting and wide of the target as the sides remained deadlocked at half-time.

A foul on Newington skipper Gowdy on the restart led to centre-back Jack Reilly having a shot at the Linfield goal in the opening minute of the second half, but his shot was over the bar.

Gillen then tried his luck with a curling effort from just outside the box and Walsh got down well to his left to tip the ball around the post.

Having held out for the best part of an hour, Linfield’s resistance was finally broken when McVarnock played a brilliant pass inside and Gillen timed his run to perfection before drilling the ball past Walsh at the near post.

If a team is most vulnerable when they score, Newington didn’t flinch. Instead, they pressed for a second and they looked to have a legitimate penalty claim turned down just minutes after Gillen’s goal.

The Newington striker appeared to have been bundled over by Blues defender Conall Murray on 63 minute, but referee Mark Milligan didn’t give it.

Nevertheless, the pressure from the ’Ton was relentless and they never let Linfield work their way back into the contest.

An injection of fresh legs briefly led to more possession from Linfield, but they struggled to break down the Newington defence.

Their only chance of note in the final stages came from a Murray corner with Marshall heading narrowly wide.

Such was the tenacity of the collective effort of the Newington players, Hamilton didn’t make a single substitution. McVarnock was named Man-of-the-Match for a heroic display, while Gillen and the industrious Gowdy were also outstanding for the victors and Walsh deserves praise for a string of top-class saves for Linfield Swifts.

The sides will clash again in the next round of the Intermediate Cup next month in what is fast becoming an engrossing rivalry. For now, the celebrations and the Steel and Sons Cup belong to Newington.