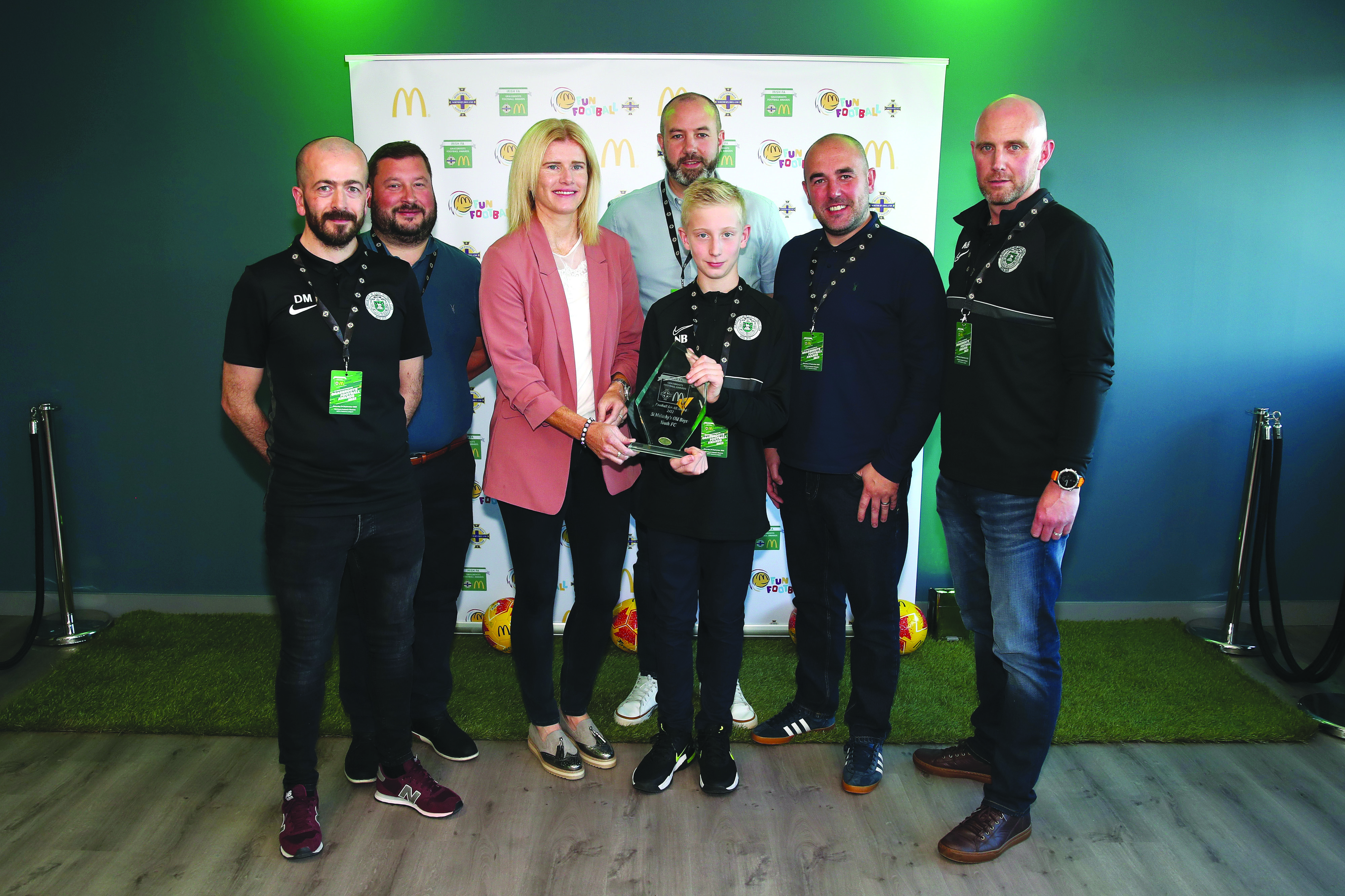 ST MALACHY’S Old Boys Youth FC from North Belfast was presented with the ‘Football for All’ award at the recent McDonald’s Irish FA Grassroots Football Awards for 2022, held at the National Football Stadium at Windsor Park.

The annual McDonald’s Irish FA Grassroots Football Awards, which celebrate 20 years in Northern Ireland this year, recognise the inspirational commitment and hard work of football clubs and volunteers who give up their time and make a long-lasting impact on young people and communities.

The ‘Football for All’ award celebrates an individual or club that has put inclusivity at the heart of the ethos of their club and has excelled in promoting football for all.

“We have around 50 teams playing each week, made of up both girls’ and boys’ teams and a disability team, which we’re very proud of.

“We are very proud to be recognised by McDonald’s and the Irish FA with this national award.  It’s a strong endorsement for our welcoming and inclusive ethos and really encourages us to continue developing and enhancing what we’re doing.”

Highlighting the importance of local grassroots football, Gary continued: “We get our kids involved from around the age of four or five, ensuring they get out of the house and make new friends.

Congratulations to @wearetheweemacs for winning the Football For All award at the @IFAFootballDev McDonald’s Awards. Well deserved 👏🏻 pic.twitter.com/bDuNZFSXEG

“Regardless of their age, gender or ability, it’s about being part of a team and letting them express themselves.”

McDonald’s Fun Football ambassador Pat Jennings said the Awards provide a important opportunity to celebrate the fantastic work that takes place at all levels of the grassroots game in.

He said: “Congratulations to St Malachy’s Old Boys Youth FC for their very well deserved award, and indeed to all our regional and national award nominees and the winners, who all work tirelessly in the background at their clubs to keep the local grassroots game alive.

“Each year when the Awards come around, I am humbled and inspired by the dedication, passion and enthusiasm of our grassroots volunteers and by the tremendous impact they have on the lives of children and young people right across Northern Ireland.”

In 2021 McDonald’s celebrated the huge milestone of having provided five million hours of free Fun Football to children in the UK – with more than 75,000 children having benefitted from 250,000 hours of coaching, games and fun.

More recently, McDonald’s launched its new Fun Football programme, which will provide over one million 5–11-year-olds with the opportunity to enjoy free football coaching across the UK.

The new programme will deliver over 10.5 million hours of Fun Football over the course of the next four years making it the largest grassroots participation programme in the UK.

In addition to the Irish FA, the programme will be delivered in collaboration with the Scottish FA, The Football Association of Wales and a network of national coaching providers in England.