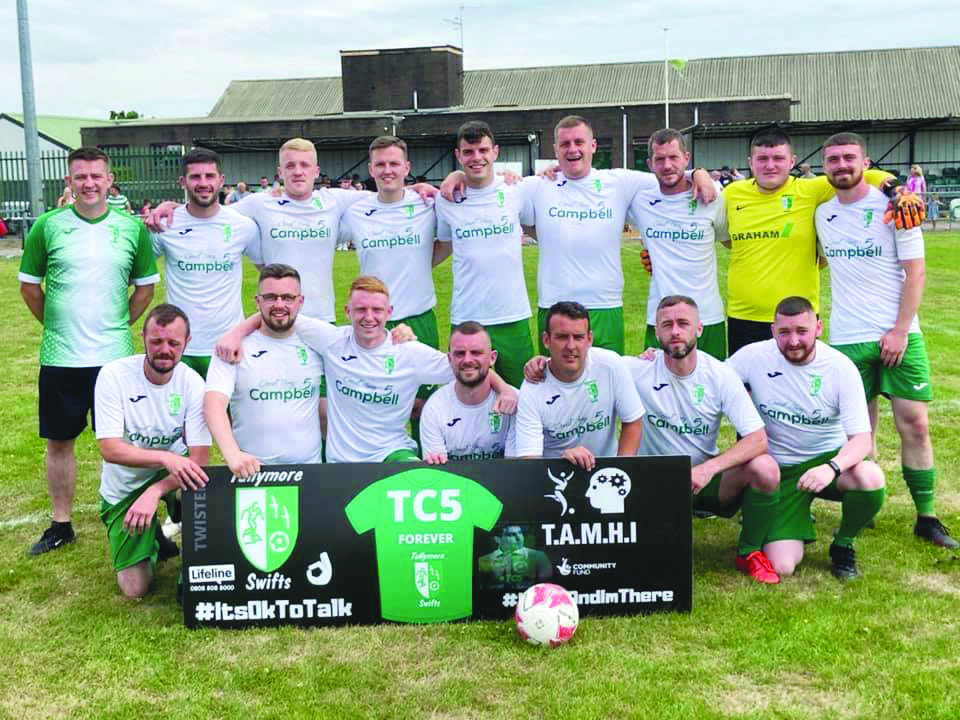 DONEGAL Celtic Park will be the venue on Sunday morning as nine teams from four clubs (Tullymore Swifts, St Oliver Plunkett, Ford FC and a Select side organised by the family)  battle it out for the Tony Campbell #TC5 Memorial Cup.

Organised by Tullymore Swifts FC, this is the sixth instalment of the tournament that will also include a fun day in memory of former Swifts’ player Tony Campbell who passed away at the age of 29 in 2017 due to an undetected heart condition.

The condition has affected others in the club including Marc Prendergast who sadly passed away after being admitted to hospital in 2020, while Brendan Dorrian miraculously survived after collapsing and being resuscitated thanks to a pitch-side defibrillator.

A massive shout out to all our #TC5 confirmed sponsors, with hopefully many more to come!!(DM 😉)

Incredibly kind donations made in order to take this community led project into its 6th year!

Can you help make this family fun day even better or donate? https://t.co/nSJbWMBMyC pic.twitter.com/EYeExBK7bY

The tournament takes place two days after what would have been Tony’s 35th birthday and the proceeds will go to Cardiac Risk in the Young - a charity that offers free screening for those aged between 14 and 35.

“This is in memory of Tony Campbell who was 29 when he died five years ago from an undetected heart condition and from the start, we have run this tournament as close to his birthday as we can,” said James Murphy from Tullymore Swifts.

“At least 12 drop dead every single week throughout Britain and the North from this condition and it’s one that you don’t hear of until it arrives at your doorstep. There is one in 300 who is affected by this condition and are prone to dropping dead at any time.

“Tony died, Mark Prendergast died in 2020 aged 39 with something similar and then Brendy Dorrian collapsed but was resuscitated on the pitch.

“For such a small club, it really has affected us and I’m sure it has affected a lot of others out there but maybe doesn’t get the exposure it warrants.”As-well-as the serious business of the tournament, there is a family aspect with a bouncy castle, face painting, an ice cream van and local businesses have donated snacks as-well-as prizes for a raffle that will help raise funds for the charity.

It promises to be a great day befitting of Tony with the action getting underway at 10am.

“We run this as a family fun day as well and we have been contacted by Eimear’s Wish who will have people up putting on things for the kids as well,” added James.

“There is quite a lot going on and it’s the biggest event we run as a club.

“Wee Tony was a great character and we miss him dearly as he had such an influence in the club on and off the pitch, so it’s only fitting we have something like this in his memory.”