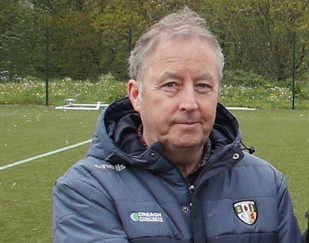 SOUTH Antrim chairman Frank Caldwell says that competitions organised for juveniles and seniors could still go ahead this year should there be sufficient interest.

Initially, it was thought that any action to take place this year would be limited to senior teams, but Caldwell revealed that clubs have been contacted to gauge whether there is the willingness or means to organise some condensed competitions.

With no reserve leagues organised at All-County level, ‘Southie’ competitions could afford those players who would usually feature in clubs’ second teams including younger players making the breakthrough to senior, the chance to see action in 2020.

All will depend whether clubs would be able to meet the return to play protocols as various grades and whether they would have the numbers to put teams on the field in what has been the strangest of years.

“There is nothing set in stone but we did put out a communication to the clubs, asking what they intended to do in terms of coming back underage and to let us know by the end of this week,” he revealed.

“We can look at that and see what teams there will be and then we could produce some sort of a programme for them, probably a short and condensed one.

“Clubs would have to look within to see if they have the personnel and resources to follow the rules and regulations as there are quite a few at this moment in time.

“At senior, again it will be down to the clubs coming back and letting us know whether they intend to participate in senior hurling and football. If they do, hopefully we can again try to get some sort of a programme up and running.

“It just depends on numbers, but we won’t know for a while until the clubs let us know what they intend.”

With the Antrim County Board releasing their own programme on Friday, there was been murmurs of discontent, especially amongst dual clubs who will have players line out in both codes in what looks to be a hectic schedule throughout August and into September.

Should the Stormont Executive give the green light for a return to play a little earlier, the headache for Antrim and its clubs could be eased a little should the option to resume on July 15 instead of July 29 come to pass.

Caldwell - who is also chairman at St Agnes’ GAC - has sympathy for the fixture planners and feels that for this year, the plan in place is better that nothing.

“It’s a very condensed season and inter-county is always going to take a priority, unfortunately from a club perspective.

“I think we have 11 weeks to run our competitions off, but then if you did it another way it would be wrong in the eyes of some too, so maybe we just have to get on with it this year and see where it takes us.

“There may be an extra two weeks in July that can be used and that would ease the pressure a bit. But if you don’t have the time and you want to play the games, I don’t see an easy way out of that this year.

“Even if had the full year, there would still be problems as the GAA is just that type that takes a life of its own.”