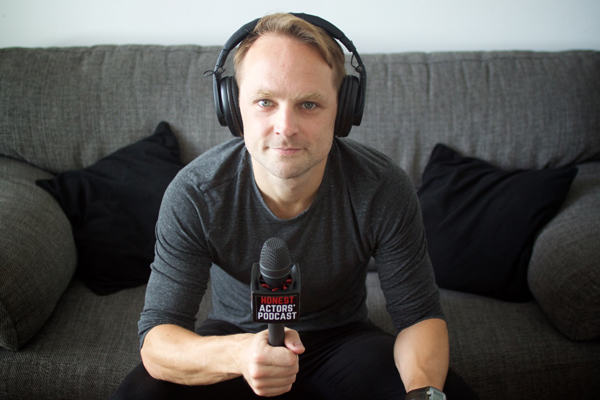 His ‘Honest Actors’ Podcast’, which has outranked shows from Hollywood heavyweights Ricky Gervais and Alec Baldwin on iTunes, returns for a second series at the end of September.

For Jonathan, the podcast’s success is partly down to love of a good yarn – and partly his accent.

Speaking to the South Belfast News Jonathan said: “I have always loved nothing more than sitting down to have a natter with someone. Even when I was at Queen’s, I would rather sit with a few mates over a beer or a cuppa than go somewhere I couldn’t hear myself think.”

He added: “When I was starting out in London, I worked in restaurants and was always being shouted at for standing in the kitchen asking the chefs – from Brazil, South Africa and Bangladesh – questions about their lives back home.”

Jonathan moved from the Ormeau Road to South London in 2009, shortly after marrying the actress Bronagh Taggart (The Fall). In the intervening years, they settled in Tooting and made careers for themselves.

While Bronagh has been appearing at the Old Vic, filming The Fall and writing much of BBCNI’s 6 Degrees, Jonathan has been working at the National Theatre, performing Shakespeare and sharing an agent with Ralph Fiennes and fellow Belfast actor Ciaran Hinds. But some things never changed.

“Once I started to get more regular acting work, I went from being the chatty waiter to being the inquisitive Irish guy asking other actors how and why they started out, what had been the hardest points in their careers and what had kept them going. When I was out of work, I found chatting to other actors over coffee oddly therapeutic. But nobody was having these kind of honest chats anywhere in the public arena.”

And so The Honest Actors’ Podcast was born, launching this time last year with a free fortnightly download, featuring interviews with ‘jobbing’ actors.

Aside from becoming the UK’s highest ranked acting podcast on iTunes, the project also hosts an award-winning blog and is recommended to acting students at the prestigious RADA – not bad for an actor who picked up his training on the job.

“I went to Rathmore and didn’t even study drama at GCSE because my da wasn’t keen, even though he’s a musician himself,” laughed Jonathan, who is currently filming with Judy Dench and has several projects due for release before the end of year, including new BBC period drama My Mother and Other Strangers, set in and filmed in locations around the north.

The big task, though, was finding a way of making the podcast pay so that it could continue beyond a first series.

“With a solid following and a good reputation, I made the decision to pull the plug and appeal for a sponsor to step in and save the project. The guys at this ticketing app TodayTix got in touch to say that they were fans of the show and were interested in working with me to bring it back. There’s not much money in podcasting and so not many podcasters are lucky enough have sponsorship deals like this one.”

Series two is in the can and will launch on September 30, with new episodes being added every fortnight after that. Guests this time around include Olivier Award winner Noma Dumezweni (currently starring in the West End smash hit Harry Potter and the Cursed Child), BAFTA winner Michaela Coel, and fellow Irishman Billy Carter.

“I think people like listening to the accent. Well, so they say. Like every northern Irish person, I cringe hearing my own voice, but the listeners over here seem to warm to it. We never sound like we’re trying to sell something. Maybe that’s it. The podcast kind of sells itself”