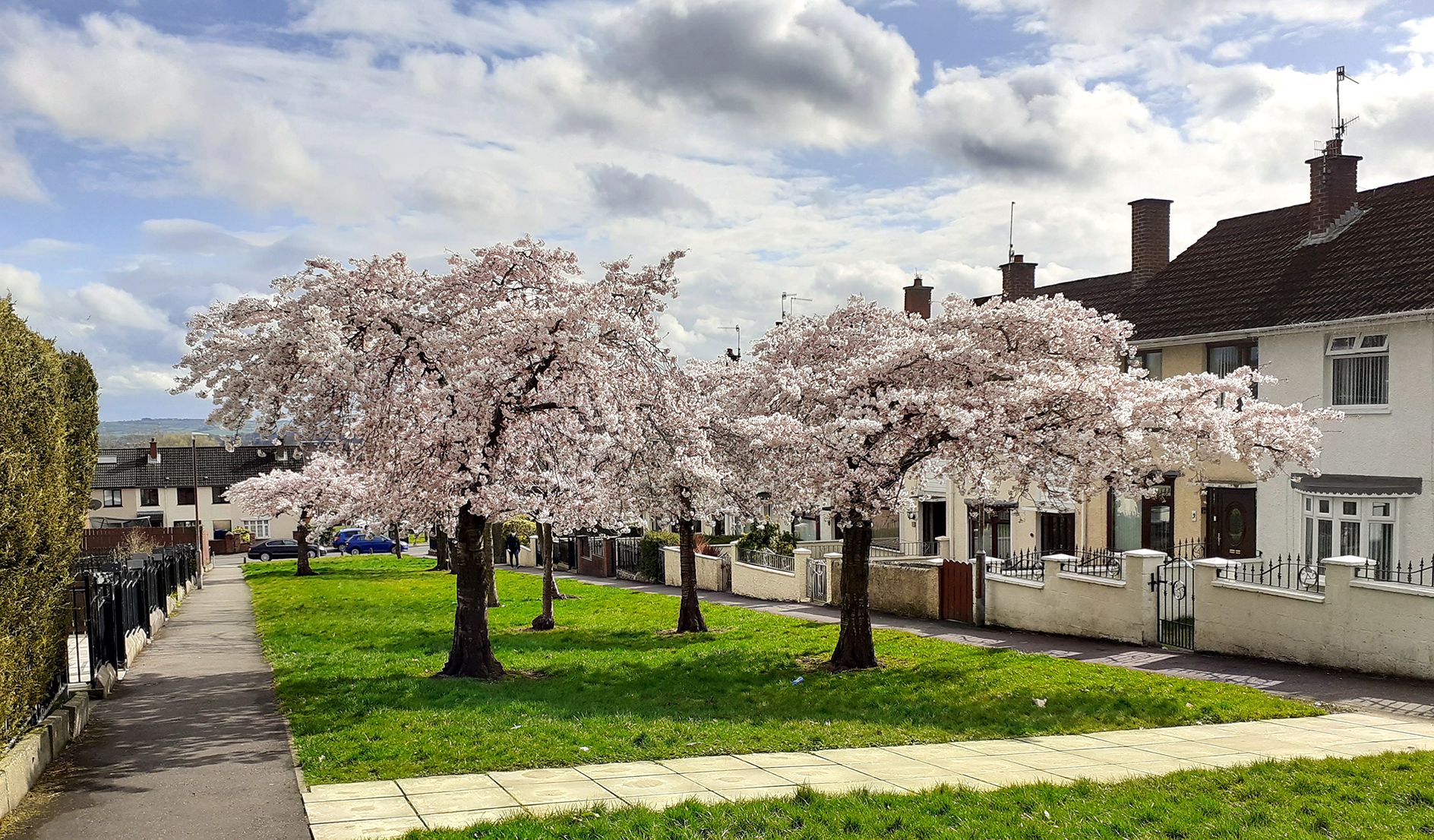 PRETTY: Cherry blossoms in Lenadoon; Below, willow warbler and raven-watching

WHEN you head up to Colin Glen for a nice late-spring dander, you don’t expect to be caught in a snowstorm. But on Monday we got caught not just by one storm, but by SIX!

At one stage our heads were pounded by hailstones the size of pennies, but minutes later the forest was magically filled with a multitude of snowflakes floating like fairy dust, all illuminated by the sun which incredibly was shining at the same time.

We had gone there in search of two of the glen’s long-time residents – kestrels and dippers. Kestrels have nested in a quarry here for as long as Dúlra can remember, while dippers are among our earliest nesters and will probably already be incubating their eggs. But in the end it was two other birds which stole our hearts.

For everyone who needs a willow warbler today ☺️ pic.twitter.com/oH3vSzInYK

The dippers had gone awol and we didn’t see a single bird despite walking up most of the glen along the riverbed.  The likelihood is that the females are in their mossy nests on the bank. So easy to find then! And as soon as the males catch any glimpse of human visitors they’ll lie low – they don’t want to attract you in any way.

We did see a kestrel, which darted from cliffs in the quarry beside the glen, disappearing over Colin Mountain. This bird will still be nest-building and won’t lay eggs for another month.

But another spectacular bird refused to abandon the quarry despite our presence. A pair of ravens flew from the cliff-face and circled above us, eventually landing on a tree at the top while looking down on us.

Scores of jackdaws also nest in the cliffs here, and they acted like a support act for the ravens, gathering in the trees around their two giant leaders like an army of protectors.

Geordie Hynes can be seen here scanning the rocks with his bins in a bid to find the raven’s eyrie – and he finally found it, a platform of twigs wedged into a crevice high up on the rocks.

This nest may be as old as the quarry itself – ravens can live for a quarter of a century, so this pair may even be the same ones that greeted Dúlra when he first visited here as a youngster. As Geordie pointed out, we rarely think of birds growing old – if someone shoots a crow like this, it’s not just another bird, but one which may have been on this earth for many, many years. The ravens here refused to fly away because they had chicks in their nest, for ravens, fiach dubh in Irish, are our earliest nester. We soon moved on and left them at peace.

The first snowstorm hit as we approached the edge of the forest – and it was here we discovered a bird which warmed our hearts.

Amid the falling snow, a flock of small birds were feeding among the willow trees. Dúlra raised his bins and, as is the birdwatcher's norm, spoke out the birds he had spotted. “A blue tit, a robin.... and a willow warbler!”

Dúlra screamed those last words – before him was a bird which he never thought he would see at this time of year.

Willow warblers, ceolaire sailí in Irish, are summer visitors to Ireland. They spend our winter in Africa – and it’s likely that this bird had just touched down in Belfast that very morning after its exhaustive journey.

Soon others joined it – a family unit of about five birds – as they feverishly pecked at minuscule insects on the new buds on the willow tree, just as their name suggests.

At first we didn’t know if they were willow warblers or chiffchaffs – the species are practically identical – but thankfully one of the birds was helpful enough to sing the willow warbler’s familiar sound of summer.

They were incredibly tame and we were able to get right up beside them. Hunger – and presumably tiredness – trumped fear.  They must be delighted to be back in Belfast once more, although they certainly didn’t expect to find snow – that’s the reason why they left in the first place.

Let’s hope spring finally starts so they can enjoy our hills as much as we did!

• Our main picture shows what  has got to be the prettiest street in West Belfast – at least for a fortnight! Creeslough Park in Lenadoon was stunning when Dúlra happened to pass by and snap this pic of the cherry blossom trees in full glorious bloom. It’s a great example of how an urban environment can be hugely enriched by introducing nature. The only problem for the residents is that cherry blossoms bloom on average for just 14 days – but what a fortnight that is!