SQUINTER: Orange sisters are doing it for themselves 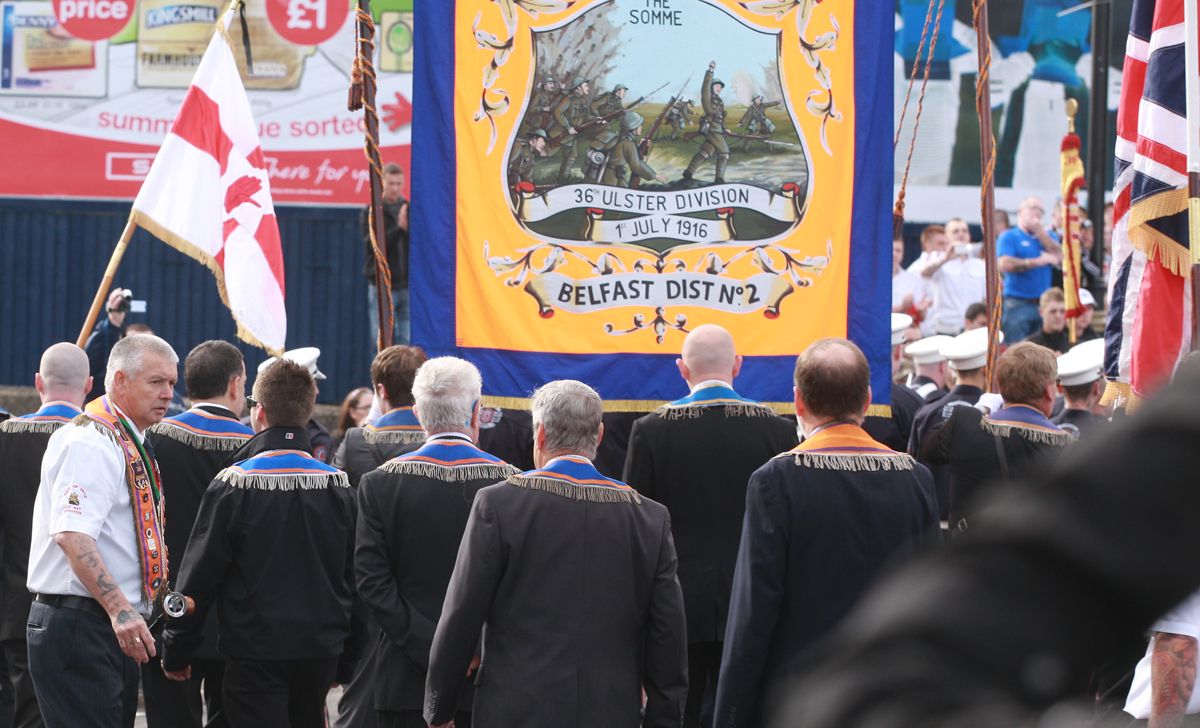 MEN-ONLY: The Orange Order is an entirely male organisation with the Association of Orangewomen of Ireland merely a satellite body

IT suddenly occurred to Squinter. It wasn’t something that he’d been reflecting on deeply in recent weeks and months, or something that had been keeping him awake as the nights draw in. A light just clicked on and he found himself shaking his head as he pondered the essential madness of it all.

And what was this flash of reality of which Squinter speaks? Well, simply that the Orange Order is routinely interviewed on the local media about matters of political import when – let’s see now, what’s the best way to put this? – their credentials are not what we call impeccable in the trade.

It's a centuries-old organisation whose core values and principles have changed not a jot in the 230 years since Dan Sloan and James Winter started painting tyres and burning kribbies outside the tiny County Armagh cottage where King Billy kissed his first bloke on the way to the Battle of the Manky Mattresses. Or something like that. And yet there the Orange Order is – being interviewed or having their statements gravely intoned alongside those of elected political reps as if they’d stood successfully for election, when the only thing they’ve ever stood successfully for is a wheezy accordion rendition of God Save the Queen in a tin roof hall.

It’s an organisation which exists simply to oppose Catholic idolatry and which won’t have a woman about the place, although to be fair to the Orange, their laydeez are free to make tea, chat about Strictly and knit sashes in a separate women’s organisation which has zero representation on– and zero say in – the all-powerful Grand Lodge.
Just how not liking the smell of Mass qualifies the Order to comment on the impact of the Protocol on business is not entirely clear to Squinter. Why keeping women in the Orange Hall kitchen entitles the brethren to a place at the political table is anybody’s guess, quite frankly. And how the ability to doff a bowler and hold a sword up straight at the same time is linked to keen economic insight is a question that in all likelihood will never find its answer.

Squinter: We have become so inured to casual sectarianism that sometimes we need to stop and think about what's going on. The Orange Order, which exists to oppose Catholicism and which bans women, is in the year 2022 routinely platformed by @BBCnireland This is objectively crazy.

Squinter has known all these things for years, he’s witnessed men in sashes being given a place in the political space all his adult life, but just as living beside a landfill site renders you used to the summer stink, so living in a place that was set up to supremacise Protestantism makes you forget that relics of that founding favouritism are still to be found scattered here and there across This Here Pravince. Relics such as journalists having elderly gammons on speed dial for no other reason than they wince at the sound of rosary beads being rattled.

Squinter tweeted about his moment of clarity: “We have become so inured to casual sectarianism that sometimes we need to stop and think about what’s going on. The Orange Order, which exists to oppose Catholicism and which bans women, is in the year 2022 routinely platformed by BBCNI. This is objectively crazy.”

The tweet produced a hefty response, with one of those weighing in on the debate offering a particularly robust contribution: “Rubbish re women being banned from being in the Orange Order. Why do you have to lie?”

And who was this fearless defender of the Orange Order’s right keep the top table free of high heels and perfume? Why, none other than former MP Kate Hoey, who counts the Donaghadee binman and Froggy Farage among her friends and whose ferocious championing of Brexit ensured that loyal Ulster remains in the EU – and she has Squinter’s sincere thanks for that. Who knows, perhaps Kate really believes that women aren’t banned. Perhaps she thinks that women having to join a powerless satellite organisation which agrees not to worry its pretty little head about scary and difficult man stuff like decision-making and strategy is a massive step forward for the sisterhood.

There’s just no pleasing some people on the airwaves

‘SOME people”. Who are “some people”? That’s a question which those who use the phrase will never have the inconvenience of having to explain, and so it’s a question that those of us who are daily exposed to the tyranny of “some people” will have to do our best to answer.

“Some people” are a nameless and faceless societal cohort of unknowable size that allows broadcasters and interviewers to say what’s on their minds while maintaining the thin and brittle veneer of impartiality that keeps them out of hot water with their bosses and Ofcom.

Many and varied are the ways in which “some people” direct and influence a political debate on the television or on the wireless while never having offered an opinion or indeed opened their mouths.

Interviewer: “But some people say that the world is a finite disc with the Arctic Circle in the middle, while others think that the Earth consists of the seven continents in the middle with ice around the edge which stretches in every direction to infinity.”

What the interviewer said is perfectly true. Some people do believe that the Earth is flat, and among such people there is a range of opinion on what form that flatness takes. But it’s balls and it shouldn’t be given airtime. And while it’s highly unlikely that any interviewer would labour the icy infinity point even if a debate on the shape of the Earth were to reach the airwaves, the “some people” gambit is used to similar effect in rather more prosaic and familiar debates. But unlike the flat Earth theory, the argument that “some people” are advancing on local radio and TV is pretty often reflective of the one that you suspect the interviewer to hold. And given that for some strange reason there is a pretty significant over-representation of interviewers from a unionist background among broadcast media big dogs, “some people” all too often seem the truest of true-blue.

“To be honest, I don’t think that people should be burning bonfires with tyres and foam that give off cancer-smoke.”

“But some people say that they’re being denied the right to express their culture, that they’ve given enough and can give no more.”

(Translation: We couldn’t find anybody mad enough to come and defend cancer-smoke, so I’m giving it a bash.)

“It’s for those who are boycotting Stormont to explain why they won’t go back to work in the middle of a crippling cost of living crisis.”

“Well, some people would argue that doing nothing about the Protocol would just make things worse for struggling people in the long run.”

(Translation: We couldn’t get anybody from the DUP to come on and talk about what they’re doing to poor people at the minute, so I’ll do it for them.)

“It’s a fairly simple and democratic thing to say that if enough people want their street name in Irish then that should be facilitated.”

“Although some people would say that they feel their sense of Britishness is being eroded a little bit more every day by things like this.”

(Translation: If this kind of thing continues it won’t be long until they get to my street.)
It’s such an exhausted and meaningless phrase that Squinter winces a little every time he hears the words “some people” now. Might there come a time when it falls out of fashion, like “going forward” and “we are where we are” seem to have? If there does, some people might think that’s no bad thing.