SQUINTER: Well yes, but ooh ah up what Ra? 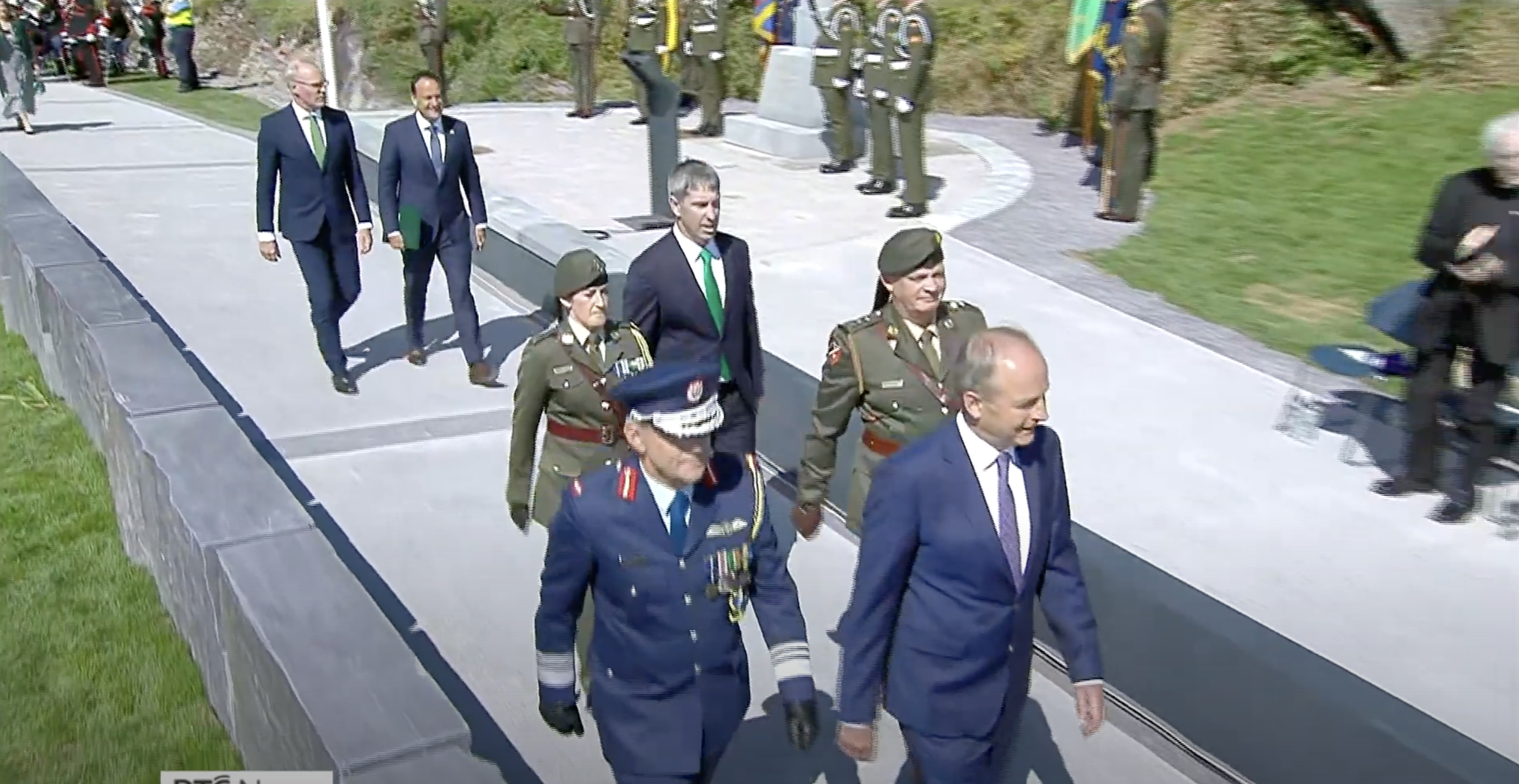 ON the 100th anniversary of the death of Michael Collins in September, Tánaiste and Taoiseach-in-waiting Leo Varadkar addressed a large commemoration at Béal na Bláth.
He said: “As Director of Intelligence during the War of Independence, he was able to paralyse an imperial war machine and expose its frailty to the world.”

For Collins, paralysing an imperial war machine meant shooting British soldiers in the back of the head as they knelt praying in their pyjamas.

Speaking at the same event, Taoiseach Micheál Martin said: “Facing down an empire which spanned the world required a lot more than determination and public support – it required a new type and level of organisation never before seen in an independence struggle.”

For Collins, facing down an empire meant the shooting of six Protestants at Altnaveigh in an operation led by a future Tánaiste.
Singing in the Hampden Park changing room last week after a play-off victory over Scotland secured them a World Cup place, the Irish women’s football team sang: “Ooh, ah, up the Ra.”

For the footballers, ‘Ooh, ah, up the Ra” meant…

Because let’s be honest. In Béal na Bláth Micheál and Leo were in a way singing ‘Ooh, ah, up the Ra’ given that the man they were there to honour was perhaps the most famous IRA man in the history of the organisation. They may have been wearing expensive suits and not football kits; they may have been using words written by  their highly-paid comms teams and not words written by the Wolfe Tones; they may have been referring to the brutal and vicious IRA that they approve of and not the brutal and vicious one that they don’t approve of; but they were honouring the IRA.

Interestingly, loyal Ulster is of one mind in considering to be the same thing the IRA that shot informers and dumped them in Connemara bogs 100 years ago and the IRA who shot and killed informers and dumped them in South Armagh bogs 40 years ago. They are as incensed by the naming of the GAA all-Ireland football trophy after IRA man Sam Maguire as they are about the naming of a park after IRA man Raymond McCreesh. They are as unimpressed by the tortuous attempts of Fianna Fáil and Fine Gael to draw a distinction between unmandated guerrilla actions of 100 years ago and those of 50 years ago. So while it doesn’t matter a jot to a DUP politician whether the women were singing about Michael Collins or about Bobby Sands, it's absolutely crucial to the origin story of the Republic of Ireland which the two Civil War parties cling to. And the Belfast media was always going to do a Carla Lockhart regardless.

But had team manager Vera Pauw, instead of apologising for the singing, said that her team was happy to join the coalition government in celebrating the state founders, would the Dublin media have gone a bit easier? The answer is no, because as we quickly saw in the wake of the carnival of colic, the women footballers aren’t the only elite Irish athletes to have a weak spot for the Celtic Symphony. In May 2019 Dublin Live reported that the Leinster rugby squad, which had just beaten Glasgow Warriors in Glasgow, gave it loads on the plane back to Ireland. A video of the singing shows that the stewards on the plane were happy to let a Leinster player take over the plane announcement system to lead the singing. The headline read: ‘Watch delighted Leinster players singing Celtic Symphony on flight back to Dublin Airport’. The story scored precisely zero on the Dublin media Richter scale. So middle-class Leinster rugby boys singing an IRA song is absolutely fine and dandy while mostly working-class women footballers doing it was an event of Archduke Ferdinand proportions.

And the headline in the same Dublin Live on the Irish women story? How about ‘UEFA and Scottish police to investigate video of Irish players singing pro-IRA song’. See what they did there? It’s ‘Celtic Symphony’ when it’s Dublin 4 rugger-buggers. It’s a ‘pro-IRA song’ when it’s pony-tailed soccer girls.

Did the Leinster story get blanked by other media because journalists in Dublin didn’t give a monkey’s about IRA songs three years ago? Or did it get blanked because the Dublin media has a gross over-representation of braying Leinster rugby fans in its ranks. Leinster rugby fans who may – who knows? – have been known to sing a bar or two of Celtic Symphony in their time. Take your pick. And then take your side.

In memoriam: Letting go of the past isn’t always that hard

SQUINTER took a race down to the Central Library’s newspaper archive section on Friday. It was an interesting afternoon and rather a longer one than Squinter had planned as there’s nothing more guaranteed to eat up time than the many fascinating distractions to be found in every turn of a page in newspapers from the past.

One of the distractions from Squinter’s mission was the classified sections of the Belfast Telegraph and the News Letter – and a grimly instructive distraction it was too. For in those columns were dozens of death notices (a small selection above) for the UVF men who blew themselves up in the Miami Showband atrocity in July 1975, delivered and paid for by hand in the days before the internet and bank cards.
Classified desk.

“Next, please. Ah, Brigadier Black, lovely to see you again. Miami Showband, I take it?”

Different era, different society, you might say, which ordinarily would be fair enough. But journalists and commentators in both papers continue to obsess about our violent past – with a heavy emphasis on the IRA’s part in it. Do they know that their newspapers once published vainglorious militaristic death notices which paid tribute to sectarian killers even as their victims grieved and groaned? Probably not.

And if they’re just finding out will they ask themselves what long-term effect the normalisation of loyalist paramilitarism in the classified sections of the two morning unionist newspapers had on the perception of the UDA and UVF by the unionist community? Who knows?

Did other newspapers across the north accept similar notices from paramilitaries – loyalist or republican? Squinter has no idea and it’s entirely possible and probably even likely; but then there are no other newspapers which currently litigate the conflict of the ’60s, ’70s, ’80s and ’90s with anywhere approaching the same degree of regularity and righteousness. And that’s perhaps understandable – the union is at its weakest in a century and when old certainties are in the act of being washed away then media outlets which are not only comfortable with old certainties but did much to create them tend to circle the typewriters.

The News Letter and Belfast Telegraph front page reporting on the day after the atrocity contained key facts about the atrocity. That two of the dead – Harris Boyd and Wesley Sommerville, sorry, Major Harris Boyle and Lieutenant Wesley Sommerville – were UVF. That they died when the bomb they were placing on the band’s minibus exploded. And yet, despite the fact that it was widely known that the Boyle/ Sommerville deaths had been an ‘own goal’, virtually every one of the 40-odd death notices in the News Letter claimed the two had been “murdered”. By whom, though? Their colleagues? Their victims? Not only were the UDA/UVF permitted to play toy soldiers in the papers – they were free to make things up as well.