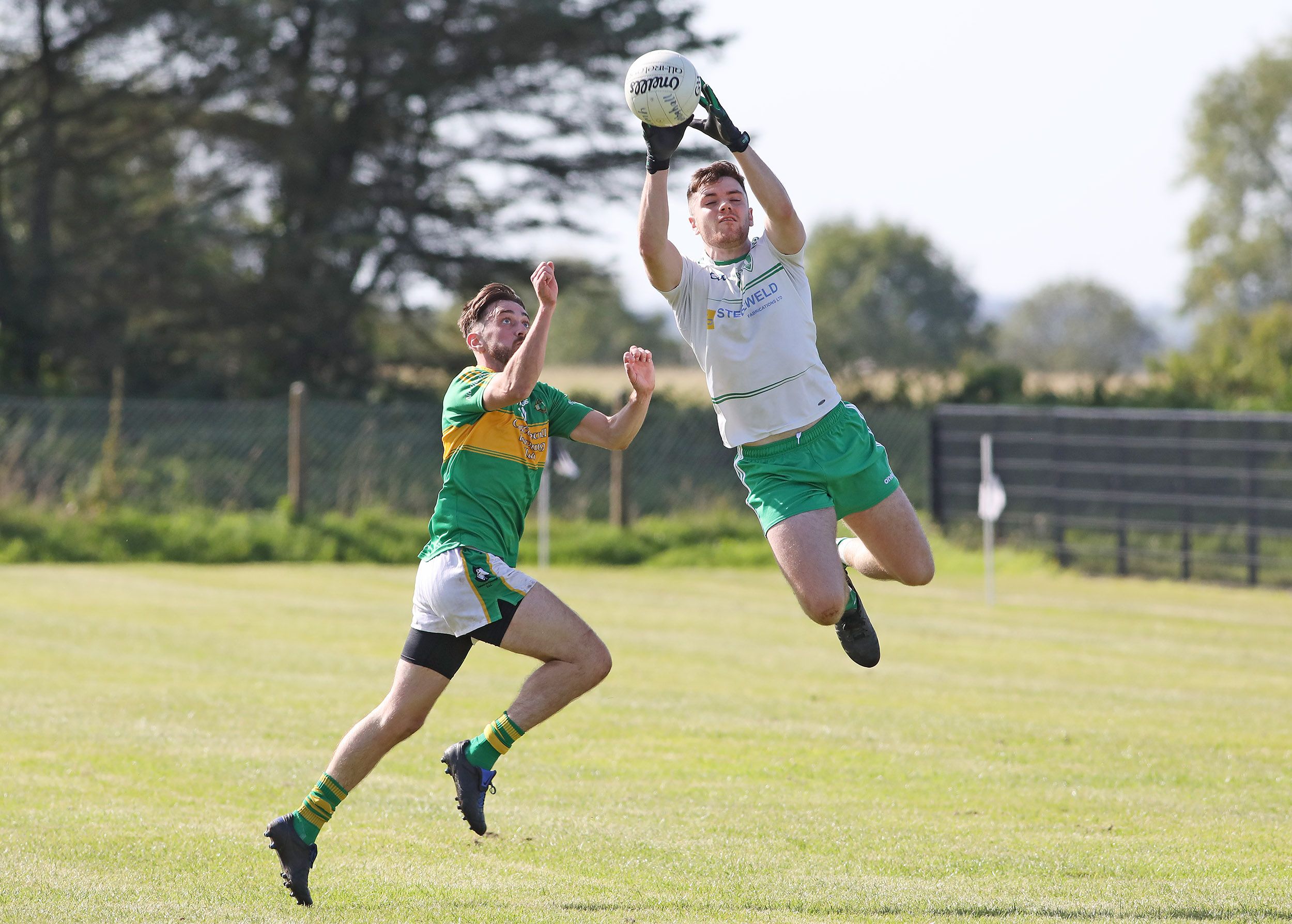 A STRONG finish to the first half saw St Comgall's build the foundations for victory as they advanced into next weekend's Antrim Junior Football Championship final at the expense of Pearse's at a sunny Ballymena this afternoon.

With the New Lodge outfit temporarily reduced to 14 following a black card shown to Tom McFarlane, the Antrim town side took full advantage and rattled off 1-2 in stoppage time to put daylight between the teams.

Try as they might, Pearse's just couldn't get within striking distance to make a real fist of it in the second period as the goal they needed just wouldn't come, but they kept fighting until the last.

They will rue some missed scoring opportunities that would have brought them closer and whilst St Comgall's were just that bit more clinical in front of the posts, they too spurned some opportunities and over the course of the game, were worthy winners.

The Antrim outfit were put into an early lead with Miles Devine kicking his first of the day from a free, with Pearse's growing into the game thanks to excellent work around the middle third from McFarlane, but they just couldn't make possession count as they were off-target with their opportunities.

Devine doubled the Set Comgall's lead on 10 minutes from another free and they got their first from play straight after as Tom Patchett squeezed his short inside the leg post after Devine broke down Ryan McAuley's long delivery to perfection.

Pearse's didn't register before the water break despite Daniel Magee looking dangerous, but they were finally off the mark when Sean Moreland kicked a free on 16 minutes.

St Comgall's hit back with a quick exchange of passes setting Patrick O'Connor in on the left to score, but Pearse's were beginning to take a grip and Magee kicked a good score, but should have found the net on 25 minutes when through, but rolled his shot wide.
Moreland did convert a free to reduce the gap to one approaching the half when Pearse's were dealt a major blow as McFarlane was issued with the black card and 10 minutes in the sin-bin for trailing down James McCabe.

St Comgall's took full advantage with O'Connor immediately kicking a point and three minutes into stoppage time, substitute Pater McAuley took advantage of a slip as he got on the end of a long deliverer to finish low into the net.

There was still time for Ruairi Griffin to add another score as suddenly, l from a closely contested opening period, St Comgall's found themselves 1-6 to 0-3 ahead at the break.

Pearse's needed a strong start to the second half and they got it as they immediately went on the attack, winning a free that Moreland converted and he added another straight after to leave four between the teams, but this was as close as the North Belfast men would get.

St Comgall's hit back with Joe Webb splitting the posts off his left and this was followed by a brace from Miles Devine - one a free) as they led 1-9 to 0-5 at the water break.

Goals were needed to reignite the Pearse's challenge but had to be content with pointed frees by Liam Deegan and Aaron Callaghan to get to within five, but St Comgall's were always able to find an answer to maintain a healthy gap as Dylan Murdock kicked a free in response.

The goal Pearse's needed almost arrived late, but play was brought back for a free that Callaghan had to be content to tap over and St Comgall's finished well as Webb and another Murdock free late on sealed their victory and a meeting with Ardoyne in next week's final.