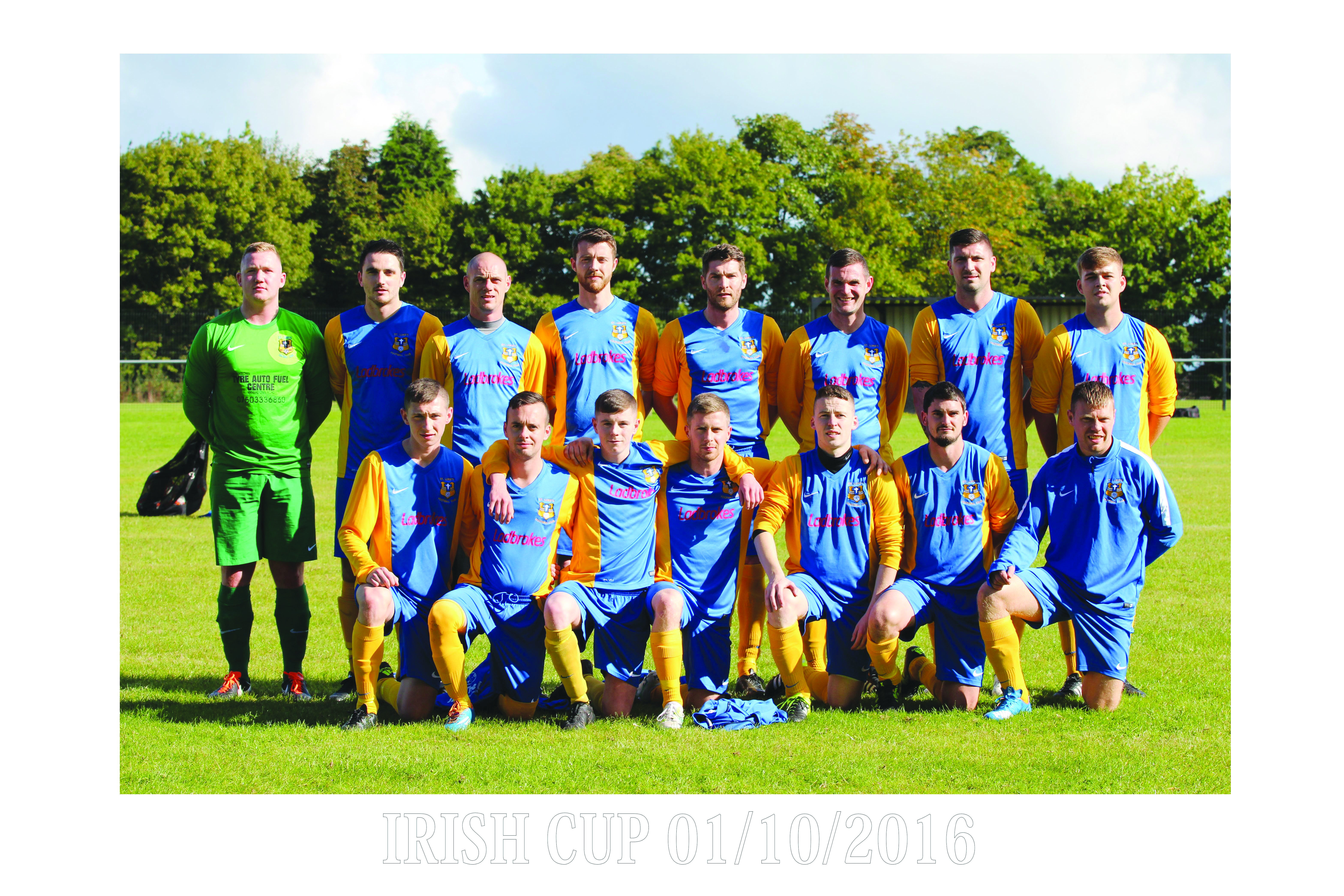 THE chance to secure a Fifth Round Irish Cup meeting with one of the Irish Premiership’s big boys is the prize on offer to St Luke’s and Sport and Leisure Swifts this Saturday.

Twinbrook’s St Luke’s are in their first year in the blue riband competition and they have adapted brilliantly following a First Round bye, defeating Mossley and Comber Rec to advance into this weekend’s Fourth Round tie away to Lisburn Distillery (kick-off 1.30pm).

The NAFL 1C side’s stock continues to rise and they are currently enjoying a fine season, sitting three points behind table-toppers Shorts, but with two games in hand.

They warmed up for this weekend’s trip to New Grosvenor with a 5-2 win over Iveagh United and while they will be outsiders to get the better of The Whites this week, joint-manager Paul McManus says confidence is high they can spring a surprise.

“It’s a big thing for the club,” said McManus who is assisted by Dee Munster.

“This is the first time in our history we have played Intermediate and now we are at this stage of the Irish Cup so it’s something else.

“We were just saying on Saturday that there is always a shock, so why can’t it be us?

“Some people might think we have no chance, but on our day I think we are more than capable of beating them if I’m being honest.

“Obviously, they are a quality side above us but we certainly aren’t going up there thinking we are going to be tanked.”

The move into the Intermediate ranks has been the next step on the rung for St Luke’s who are a rising force. They have some fine players with striker, Aaron McKinney having netted 24 times already this season. Caolan McAllister has also ben a stand-out while Dee Munster’s leadership on the field has made him the perfect assistant boss according to McManus.

“For us this is more about progression,” he explained.

“Big Dee Munster – who is joint-manager with me – has brought so much professionalism over the last two years. This year has been about keeping the players we had so touch wood, we can keep it going. We have been going well in the league too, but we have four U19s in this week.

“What we have tried to do over the last couple of years is to bring kids in from the area.”

McManus is hoping the people of Twinbrook will turn out to get behind the players on Saturday in a game he knows will be a real test, but one he is hopeful of winning should they catch Distillery on an off day.

“We have watched them closely and they can be a bit hit and miss,” he notes.

“One week they can be outstanding but would then lose to teams they should be beating, so you never know what way they will be.

“I know they have Jody Lynch who has signed for them. He was at Cliftonville a couple of years ago and then they have big Stephen Curley who I would know well. On their day on paper they should beat us, but I just have a sneaky feeling about this.

“We have a team that’s capable of beating anyone on their day so we will see how we go on Saturday.”

Meanwhile, Sport & Leisure will be hoping to put a difficult season to date behind them on Saturday when they too will be hopeful of moving into the Fifth Round of the Cup when they host Dollingstown at Glen Road Heights (kick-off 1.30pm).

Pat McAllister’s side are currently bottom of the NIFL Premier Intermediate division, but their struggles have come as a result of a depleted squad that has been frustrating for the Swifts’ boss.

“From the first league game against Queen’s when big Mick McMullan broke his ankle after an hour, it’s just been one injury after another,” said McAllister.

“There is no point in complaining, but I’ve never seen anything like it. I think we have had four or five broken ankles already this season and that’s why we have struggled. There are weeks where we have only had two or three subs so we haven’t been able to any momentum going.

“I’ve no doubt that when we get our full squad back and available, everything will be alright, but to say it’s been frustrating is an understatement.”

Last week, Swifts lost out to a late Tobermore United goal with a makeshift team, but they are hopeful they will be able to welcome back several players who missed out last weekend including McMullan, Gary Largey, Kevin Niblock, Paul Ryan and Ryan Burns.

McAllister was happy with the performance of his team at the weekend despite the 1-0 loss and believes a similar performance could see them through this week.

“We were unlucky to go to Tobermore last week and lost in the last minute, but if we can play to the standard we did then we will be fine,” he predicts.

“There is a big carrot in this one. It’s the one you want to be involved in to get a crack at on e of the big teams. We really enjoyed going to Solitude last season, so that will be the team talk this week, to give the club a day out – something it deserves.”

Saturday’s opponents aren’t without their own problems following the departure of manager, Gary Duke with Stephen Upritchard stepping in. Despite this, McAllister says his team must simply concentrate on themselves and deliver a performance he feels they are capable of.

“We haven’t been overly brilliant in the Irish Cup, we ground out a couple of results in the last minute, but I’m confident,” he said.

“We have had them watched. From getting relegated last year, five or six of their players have moved on but they are a young side and will be eager.

“I don’t know how their manager leaving will affect them, but that’s none of our concern. If we are ready to go and show the same commitment we did last week then we should be fine.”