BOOK REVIEW: A Papal blueprint for a fairer future 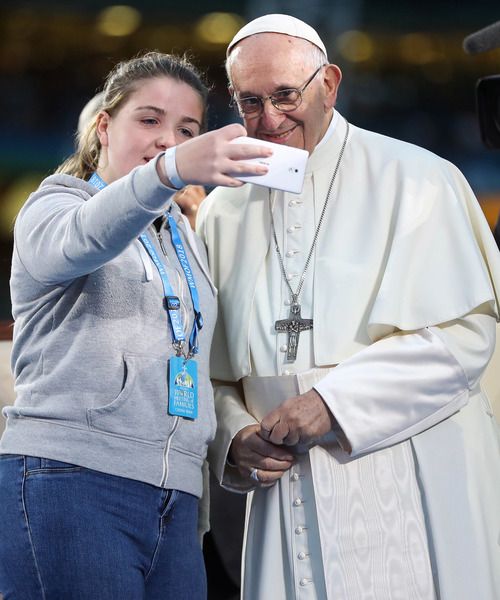 REVOLUTION: Pope Francis, during his 2018 visit to Ireland for the World Meeting of Families, takes a selfie with Alison Nevin age 12 from the Carrickmines Traveller fire tragedy family at Croke Park. Rollingnews.ie

No Pope Here! That was a slogan I was familiar with growing up. Who knows as a child I might even have shouted it with my mates. There are many who still stand by the sentiment.

So, I can hear you asking, and I hear some of you louder than others, what is a Presbyterian minister doing reading about the Pope? Well, here is the thing. I do not only think that Let Us Dream is only helpful for a Presbyterian, whose vows tell him not to refuse light from any quarter, but I think this is a document of social transformation that needs read and discussed by Jews and Muslims and Hindus and agnostics and atheists. It is a powerful challenge for all of us.

“When are we getting back to normal?” “I don’t want to go back to the old normal.” “What will the new normal be like?” These are all questions that I have heard, even said over this past strange year.

wanting to walk with Jesus through Belfast... watching as he does it... learning... allowing it to caress and collide with my soul... as prayed this morning in Fitzroy... https://t.co/A7KnSQ6tQG

The Pope is writing into these questions. He is making the most of what he calls this “stoppage”, to critique the old normal that we left behind and ask if we can come out of these restrictions and lockdowns to a much better world.

He writes, “In every personal ‘covid’, so to speak, in every ‘stoppage’ what is revealed is what needs to change; our lack of internal freedom, the idols we have been serving, the ideologies we have tried to live by, the relationships we have neglected.” All the potency of a preacher for sure.

For Francis the dream is nothing short of a revolution. He suggests that if we just tidy up the old normal we miss a powerful opportunity to create a new way to live based around people and creation.

Fraternity means that we live with a love for our neighbours. “Solidarity is not sharing of crumbs from the table but to make space at the table for everyone.”

The Pope sees our “private demons” and “isolated conscience” at the core of what is wrong with the world. He speaks of a “hyper individualism”, a lack of common good, a business focus that is damaging to the environment, society and the soul. He defines that old word sin as “the rejection of the limits love requires”. I particularly love that line. A depth charge to live by. Love of earth and love of fellow humans.

The target of his rage is unaccountable business and the wrong purposes for the accumulation of wealth. He rages, “I criticise the self-evidently fictitious idea that wealth must be allowed to roam unhindered in order to provide prosperity to all.” Instead he sees the secret of a better day “to put the economy at the service of the people to build peace and justice and defend mother earth.”

The poor and the environment are dear to Pope Francis' heart. The economy should be put to the service of these. He is a massive fan of fraternity and solidarity. Fraternity means that we live with a love for our neighbours. “Solidarity is not sharing of crumbs from the table but to make space at the table for everyone.”

I am captivated. The Pope calls it Catholic Social Teaching. Oh some of the theology and ecclesiology is a little too Catholic for a contrary wee Presbyterian from Ballymena but it would be wrong to miss its wisdom for prejudice sake. I would call it a good account of what the Bible lays out in the books of the law, what the prophets rage for in the Old Testament and what Jesus goes on about throughout the entire Gospels.

Again, do not think that therefore not being a religious person you can ignore these ideas. Even if you do not believe in the existence of a transcendent God the ancient Scriptures are wonderful books of wisdom and insight in how to live as individuals and in community.

The Pope is dreaming up a way to live that is not new but is laid out in ancient alternative imaginings. At the core of the dream is the fulfilment of the potential of every human being and environment that we live that potential in.

The Pope also has something profound to say into our own eccentric divisions here in Ireland. He is speaking into the new polarisation all over the world, particular evident in recent events in America, but his words should be heeded in the midst of our own eccentric fundamentalisms and deep divide.

The Pope talks about the “great danger in remembering the guilt of others to proclaim my own innocence” and of “reducing a person’s history to the wrong they did.” He implores us to  “look at the past critically but with empathy.” It seems to me that such attitudes would help our healing?

Pope Francis shares a lesson from the synodal approach taken by the Catholic Church. “Rigidity is the sign of a bad spirit concealing something” but a synodal approach is about “mutual listening” and the “productive tension of walking together”.

I strongly encourage all States and all people to work decisively toward promoting conditions necessary for a world without nuclear weapons, contributing to the advancement of #peace and multilateral cooperation which humanity greatly needs today.

Productive. That is at the centre of everything Pope Francis dreams about. Let Us Dream is to Pope Francis what the song Imagine was to John Lennon. “You may say that I’m a dreamer but I’m not the only one…” Pope Francis’ dream is a good one and though it holds a very similar sentiment to Lennon’s The Pope’s has a more robust argument, the worldly experience and spiritual wisdom of a very experienced religious leader.

Let Us Dream: The Path to a Better Future. Pope Francis (and Austen Ivereigh). Simon & Schuster. £10.99