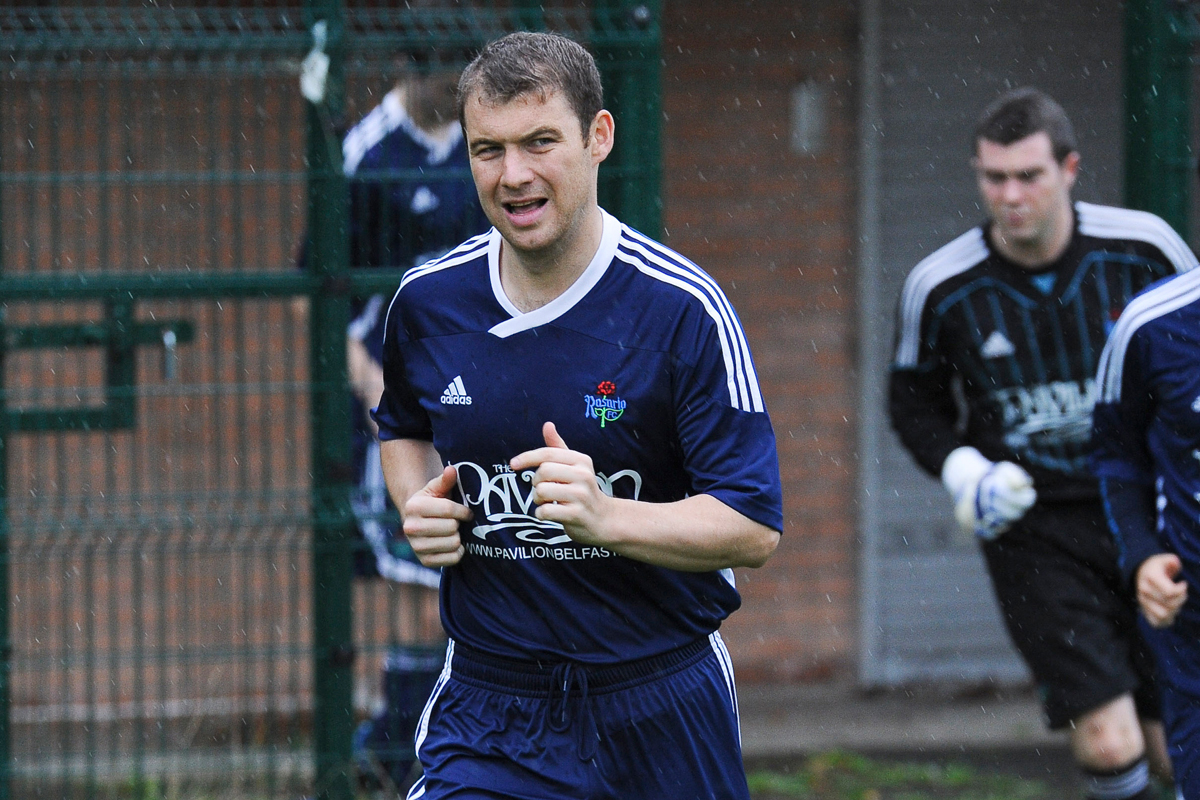 NEW Rosario manager Andy Morrow admits his players will have to dig deep if they are to retain their place in the Amateur League Premier Division for next season.

Morrow has taken the reins following Colin Telford’s decision to join up with Michael Hughes as assistant manager at Carrick Rangers.

The 29-year-old originally took over with Jonny Cleary but Cleary decided to take a step back and focus on playing so now it has fallen to Morrow and Pat Curran to steer the Ulidia club.

The Belfast based solicitor only joined the club this year after some cajoling from Telford but following the exit of the former boss, he is now the man entrusted with reviving his club’s fortunes that continued to nose dive following Saturday’s 2-1 defeat to Killyleagh.

“I had been living in Belfast but been travelling up to play for my local team in the North West,” explained Andy.

“I came to the club when Colin asked me to come and play as I got fed up travelling.

“I was coming to the end of my playing days so I gave it a go but Colin moved on and me and Jonny (Cleary) took on the role but he wanted to concentrate on playing so it’s me who has taken over.

“Our problem is it’s a different team week to week and we haven’t had a settled line-up.

“Our target is to stay up. We have 12 games left and from looking at the table it is going to be tough but all we can do is to take each game as it comes and pull ourselves out of it.”

The Greysteel native is faced with the challenge of trying to reverse the decline Rosario have faced since their 5-2 Intermediate Cup win over Lisburn Rangers back in October.

Since then the Roses have lost every game but a closer inspection reveals that they have not been far away, losing most games by a single goal.

The South Belfast resident has identified confidence as a key issue and says that with 12 games to go, survival in the top flight is their sole priority.

“We haven’t been on a great run at all but we have had a lot of injuries and suspensions,” added Morrow.

“On Saturday Cleary and Brian Downey both got sent off which isn’t going to help but before we got beaten in November we went on a run of eight or nine wins out of ten in league and cup and we were absolutely flying.

“We then got a number of injuries and I suppose that showed the strength in depth wasn’t great but in saying that every game we have lost is by a single goal.

“It always seems to be a goal in the last ten or fifteen minutes so maybe it’s a confidence issue and trying to get out of a rut.

“On Saturday we should have been 3-0 up at half time but conceded with the last kick of the ball in the half to make it 1-1.

“They had two chances all game and took them. When you are down there it’s hard to get out of it.”

The man he has replaced admitted it was a tough decision to leave the club he spent the past three and a half years with.

Colin Telford guided Rosario into the Premier Division and said that had it not been for his old friend Michael Hughes contacting him, then he would have been content to stay at Ulidia.

However, the lure of the Irish Premiership was too good an opportunity to turn down and while he has left a club in danger of relegation, the new job is also one with survival as the main aim as Carrick sit second bottom in the table.

While no longer involved with the South Belfast club, Telford will still keep an eye on their progress and believes they possess sufficient quality to stay up.

“It’s a case of out of the frying pan and into the fire,” laughed Telford.

“Michael Hughes and I go back a long way. He owns the club and approached me saying he was going in on an interim basis and would I help.

“It was an opportunity to work with him even though I was happy at Rosario but I couldn’t turn it down.

“I was with Rosario three and a half years and did a lot of good things.

“I had other offers and turned them down straight away but with this I just couldn’t say no. I think if Rosario can get everyone back and they have Andy (Morrow) there who knows a lot about the game, then they have enough to stay up.”