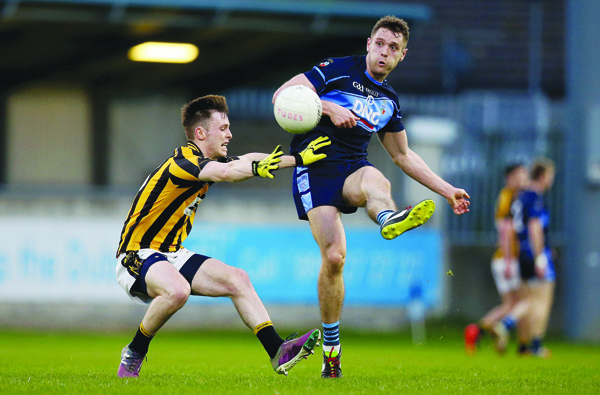 ANTRIM star Mark Sweeney is bidding to make history with his club St Jude’s as they aim to win the Dublin Senior Football Championship for the first time.

The Templeogue outfit face their southside rivals Kilmacud Crokes at Parnell Park this evening, Monday, after causing a massive upset in the semi-final.

St Jude’s defeated St Vincent’s, who have won four of the last five Dublin titles, 2-11 to 0-8 to progress to just their second county final.

Having lost five semi-finals in the last six years, Sweeney admits it was a relief to finally progress to the decider.

“That’s what everyone associated St Jude’s with up until this year really. They have been perennial semi-finalists,” said Sweeney.
“It was nice to finally change that this year.

“Since I’ve been here, we’ve played in five semi-finals, so it has been coming.

“This was the first year they’ve had the group stages and it was seeded.

“We fancied our chances of getting out of the group, but we knew we would be playing one of the top teams in Dublin in the quarter-finals.

“We were well-prepared, but it still took a massive effort to reach this stage.”

Despite beating a Ballymum Kickhams side laced with Dublin stars like Dean Rock, Philly McMahon, John Small and James McCarthy in the quarter-final, St Jude’s were again cast in the role of underdogs for their semi-final meeting with St Vincent’s.

The fact that the three-in-a-row chasing Marino men had Diarmuid Connolly available for selection again only added to the magnitude of the task facing Sweeney and his colleagues.

However, a stunning performance and goals from Seamus Ryan and Padraic Clarke helped St Jude’s to a 2-11 to 0-8 win.

The introduction of Connolly and Mayo’s Enda Varley for the second half couldn’t halt an in-form St Jude’s outfit.

Sweeney, who was sent off when the side’s met at the same stage of last year’s Championship, felt the self-belief of his side played a key part in their semi-final victory.

“We were four points up at that stage, so we were prepared for them to roll the dice,” said Sweeney.

“It wasn’t unfamiliar to us. Last year, we played St Vincent’s at the same stage. They played their full quota from the start and we went toe-to-toe with them until we had a few red cards – one of which was myself.

“We knew when they brought the big guns on, we were well fit to handle them.

“Everyone has confidence in one another to do a job.”

A regular in the Antrim team, Sweeney transferred from St Brigid’s GAC in South Belfast to St Jude’s following the 2012 season.

An actuary by professional, the 29-year-old moved to Dublin due to a lack of opportunities closer to home.

During his spell in the capital, Dublin have established themselves as a powerhouse in Gaelic Football, winning the last four All-Ireland Senior Football Championships.

His St Jude’s teammate Kevin McManamon has been a key player for the Dubs in recent years – famously scoring the crucial goal in the 2011 All-Ireland final win over Kerry.

Few would predict anything other than another Dublin triumph next season which would leave them on their own as the most successful county team ever to play the game.

Playing against the Dublin stars on a regular basis can be daunting, but Sweeney, who has committed to another season with Antrim for 2019, says the professionalism of the club scene in Dublin helps to drive up the standards of all the teams.

“It is class to be playing along side him (McManamon),” added Sweeney.

“It was kid of surreal in the first year or two.

“A few times in the Ulster Championship, you get to pit yourself against players of that calibre, but every team is going to have a county player down here.

“The novelty of playing against the Dublin guys wore off when you can’t get over them in semi-finals.

“It is a bit of a contradiction within the GAA because those Dublin lads are almost like professionals in the GAA world.

“When they come back into their club set-up, their mentality doesn’t change. “Their standards don’t drop and there is a willingness, certainty within our team, for everyone else to get up to that level.

“Kevin is a top-class guy and he is the ultimate club man.”

Just like the previous rounds, Sweeney and his St Jude’s teammates will be pitted against serial All-Ireland winners with Cian O’Sullivan and Paul Mannion in the Kilmacud Crokes ranks.

Yet, this year’s Championship has proved that a star-studded team doesn’t guarantee progression and Sweeney’s St Jude’s will be primed to pull off one more upset this evening.