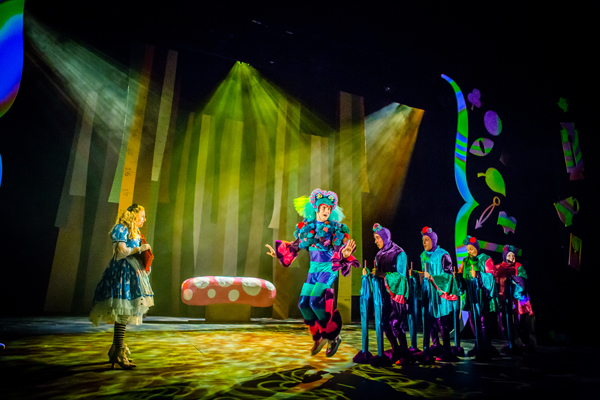 THE story of Alice and how she fell into Wonderland is one that has been enchanting generations and as the Lyric Theatre prepares to bring the curtain down on its 50th birthday celebrations this year it’s Alice: The Musical which is set to entertain Christmas audiences.
The stage is set with our first sighting of Charlotte McCurry’s Cheshire Cat, who sets the scene and acts as our guide as our heroine Alice (Ruby Campbell) is finding it increasingly hard to concentrate during a school lesson given her tendency to slip in and out of daydreams.
Suddenly Christina Nelson’s White Rabbit appears and tells us how she simply can’t “be late” and as Alice’s curiosity gets the better of her off she goes eager to find out where the scatty Rabbit is in such a hurry to get to. All of Lewis Carroll’s iconic, infamous characters are present and correct, from Allison Harding’s Queen of Hearts, Adam Dougal and Rea Campbell-Hill’s Tweedledum and Tweedledee and of course Alice. But it’s former De La Salle College pupil Mark Dugdale in the dual roles of the Mad Hatter and Caterpillar who brings the house down. Having read the book several times and watched the Disney version over many Christmas breaks, I’d never thought I’d see a Carmen Miranda=inspired carnival caterpillar song and dance routine as the West End star tells us how ‘Nothing Here Makes Sense’.
The set is cleverly decorated with patisserie stands galore for the all-important tea party as Alice decides she must face the imposing and feared Queen of Hearts to get back home. All seven cast members are on top form and had every audience member, from those who were a few months old to us bigger kids. clapping along and on our feet for the finale megamix.
Alice: The Musical is a terrific family night out with a brilliant cast, great songs and dazzling visuals. The perfect starter to the Christmas season.

Alice The Musical runs at the Lyric until January 5. For ticket information telephone 02890 381081 or visit www.lyrictheatre.co.uk