Talking over as Frampton and Santa Cruz prepare to renew hostilities 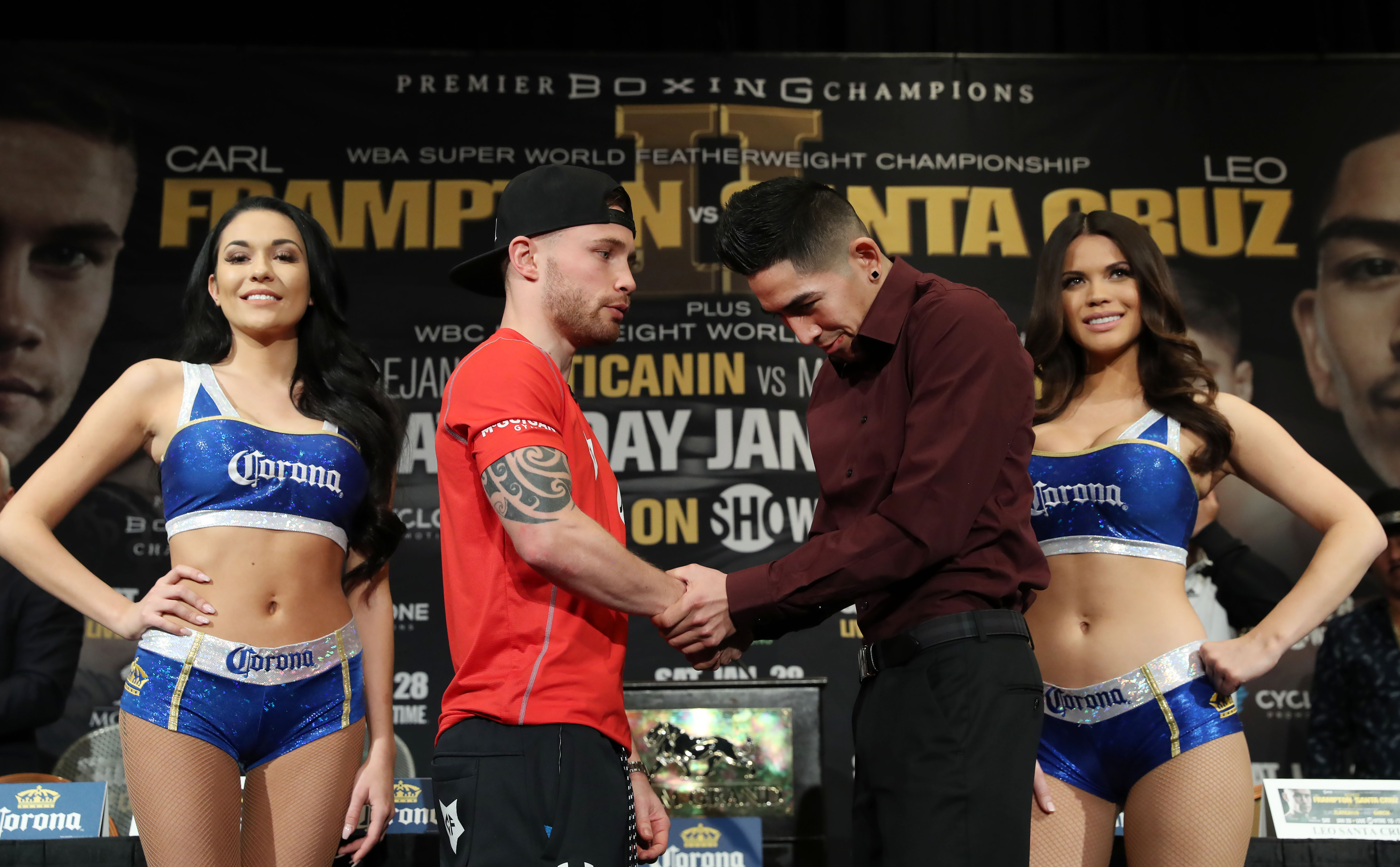 WHAT talking there has been leading into Saturday's WBA featherweight title fight between Carl Frampton and Leo Santa Cruz at the MGM Grand Garden Arena in Las Vegas is now done as both men addressed the media at the final press conference at the MGM today (Thursday).
The level of interest in this rematch of their 'fight of the year' is noticeably greater given the throng of reporters at the MGM with anticipation high for another classic between these A-List featherweights who made the boxing world sit up and take notice of the 126lb division back in July last year.
Despite this being a second meeting between the pair, familiarity certainly hasn't bred contempt as both were again respectful and have invariably left their talking for the ring.
Santa Cruz - fully refocused given his father and head trainer, Jose is in remission from cancer - said he will be raffling off his fight kit to raise money for a children's cancer charity, but that's where the kindness will stop as he aims to reclaim the belt he lost to Frampton in Brooklyn and is anticipating another barnburner.
"Since I was very small it was always my dream to be a main event on a big card," said the 28 year-old Mexican.
"I watched all the big fighters in the past and said I wanted to be there but I never believe it. I'm happy and thankful to my family for making my dreams come true. I want to come here and do my best.
"The first fight was tough and pretty even. Mexican fighters like to go out and fight and make it a good fight for the fans.
"I don't use my boxing as it can make it boring. People say I have to go and be smart, use my height and reach so we are going to do a bit of everything to do what we have to win."
Frampton looked extremely relaxed and has been enjoying the madness that is big-fight week in Vegas with the 'Jackal Army' arriving in their droves.
The defending champion is the star of the show on the biggest stage of them all, but despite the pressure he is sure he will thrive and is well prepared for the bombardment of punches that will come his way come Saturday.
"Both of us enjoyed last fight, but I think fans might have enjoyed first fight more than me and Leo," he joked in reference to the war that was their Barclays Centre meeting.
"I don't think this fight can be too much different. Our styles gel well. Leo is a great fighter and I have utmost respect for him. We fight for our families and that's all the motivation we need. It has all the ingredients for a top-quality contest.
"The way my training camp has gone means I'm confident of getting the win. I really believe I'm going to come out victorious."
The North Belfast man also had a word for his fans with around 4,000 expected to have travelled across the Atlantic ahead of Saturday's fight.
"The travelling support is fantastic," he acknowledged.
"It's a credit to them that so many have come here and I want to send them home happy."
Frampton defends the same WBA featherweight title that was once held by his manager and mentor, Barry McGuigan whose own Vegas adventure was derailed by a man named Cruz, but he is sure this will not be the case this time around and is expecting 'The Jackal' to repeat his victory over 'El Terremoto' and move on to further super-fights.
"This is going to be a sensational fight," said McGuigan.
"The last one was fight of the year.
"We have so much respect for Leo Santa Cruz and his family. They are brilliant people.
"This is going to be a great fight again, but we're taking the belts home with us."
Victory for Frampton will almost certainly lead to a unification with IBF title holder, Lee Selby in the summer should the Welshman come through his own title defence against Johnny Barros on the undercard on Saturday.
The Barry native was another who is humbled to be boxing on such a big stage and said it meant so much to him given how his career began.
"I'm happy and proud to be here," said the Barry native.
"I turned professional in 2008 and wasn't an Olympian or won no gold medals at major tournaments as an amateur.
"I started with no TV backing, fighting in the leisure centres and small hall shows and worked my way up here so I'm looking forward to Saturday and defending my title."