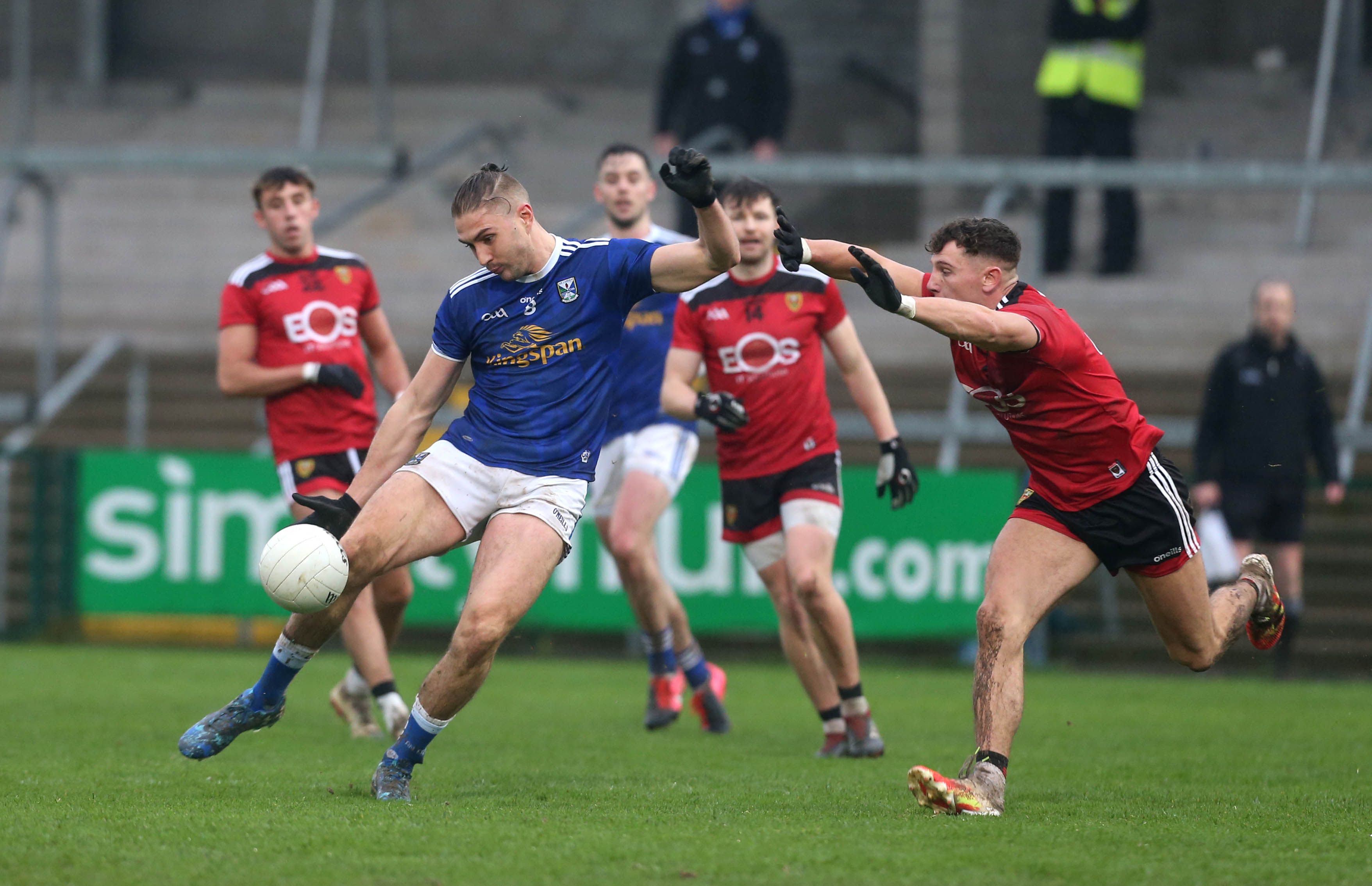 IF ever there was a preverbal ‘game of two halves’ then this was surely it as Cavan erased a 10-point deficit to defeat Down by the narrowest of margins in Armagh on Sunday afternoon.

With just over half an hour played in this dramatic and entertaining semi-final, the Mournemen looked destined to meet Donegal in the provincial decider having raced into a 1-9 to 0-2 lead with Jerome Johnston hitting five points while Ceilium Doherty’s early major gave Down a great platform.

Their blistering pace and great support play had Cavan chasing shadows the game looked all but over at half-time as Down led 1-9 to 0-4.

Cavan though are no strangers to adversity and were seven points behind at half-time in their preliminary round game against Monaghan before they won by a point in extra-time. They were also a point down against Antrim in the quarter-final before labouring to a four-point win.

The introduction of super sub Conor Madden, who scored three points from play helped turn the tide while Martin Reilly’s penalty was a key moment in the game.

While Down manager Paddy Tally took issue with the penalty award, he also bemoaned his side poor showing in the middle third with the Mournemen losing 11 of their own kick-outs and winning just three Cavan kick-outs.

“It is devastating. From such a strong position in the first half to lose the game by a point is very, very tough,” stated Tally.

“We had two goal chances in the second half – one of those would have swung the momentum back in our favour again.

“Even with the point chances, every time we missed one, they seemed to go down the pitch and score one.

“The game just kept going away and we couldn’t get a foothold in the second half.

“You have to give it to Cavan, they dominated the midfield, they were very strong on the kick-outs and we couldn’t get enough possession. “Out of 12 of our kick-outs in the second half, they won 10 of them and that just gave them the platform.

“We knew that was going to be an issue. In the first half we were able to work around that, but in the second half they just got complete control and they were able to go very direct.”

Tally was incensed by the decision to award Cavan a penalty on 42 minutes when Down centre-back Kevin McKernan was adjudged to have handled the ball on the ground following a goal-mouth scramble.

Goalkeeper Rory Burns had claimed possession after Chris Conroy had dropped his shot short, but Madden slapped the ball out of his hands and poked the ball against the base of the post.

McKernan looked to have been bundled over by Madden, but touched the ball on the ground before being pushed over the goal-line.

Referee Martin McNally took advice from his umpires before awarding the penalty, which was emphatically converted by Martin Reilly.

The goal reduced the gap to four and Tally felt it was a crucial turning point in the game.

“The game swung on the penalty, it was a very controversial call,” said Tally.

“That never happens, and that was a decisive moment in the game. At that stage we were still up by seven points and then the next thing the game is back to four, you’re playing against the breeze and the whole momentum’s swung back. I’d really question that call.”

While it was a bitterly disappointing defeat for Down, Cavan’s reward for another stunning comeback is a place in Sunday’s Ulster final against Donegal in the Athletic Grounds (4pm).

The game will be a repeat of last year’s decider in Clones which Donegal won by five points.

After slow starts against Monaghan, Antrim and Down, Cavan manager Mickey Graham knows his side can ill-afford another lacklustre first half showing against a Donegal side who beat Armagh by 12 points last Saturday.

“I was disappointed with our performance in the first half, I though we were a bit leggy, off the pace and we couldn’t get a handle on their runners,” said Graham.

“The work-rate we’d expect wasn’t there and we had to try and rectify that at half-time.

“What you see with these lads is what you get and they are never going to throw in the towel.

“A lot of teams that found themselves in the situation we found ourselves in the last three games, would have tapped out. But these boys just keep going and going and going. And you have to admire them for that, it was just pure willpower from them today, pure resilience and they never gave up.

“It's a one-off shot for us (the Ulster final). We will be written off and rightly so. We are coming up against a different animal, a seasoned team and this is their ninth final in 10 years.

“If we perform as we have done in the last three games, then they will be out of sight by half-time. I just hope mentally and physically the boys can recover and the energy of an Ulster final will give them a big push.”

Those sentiments were echoed by defender Padraig Faulkner, who was a contender for Man-of-the-Match.

“It was looking bleak. We seem to love to give teams head-starts and then catch them in the end,” said Faulkner.

“It has happened in all three of out Championship games so far and it is just something we are going to have to work on because, when we play Donegal in the final, there is no chance they are going to give us any inkling of getting back into the game.

“Any day you get to an Ulster final is a satisfying victory. Just in the times it is, any victory is sweet because we keep getting to play football and that’s all we in Cavan want to do.”

Having played for five consecutive weekends, Cavan looked jaded and out-paced in the first half as Down’s direct style caused them countless problems.

Faulkner stressed they weren’t caught on the hop by Down’s pace, but it took them to regroup at half-time and tweak their system to get to grips with their runners.

“We were not unaware, we knew about it we just didn’t do anything about it,” added the Cavan defender.

“I thought we managed the game poorly in the first half, we let runners come from deep and a lot of their scores came from midfield and they just ran at us.

“They weren’t even looking to kick in, they ran at us and it is something we had actually planned for, we planned to tag runners, but we didn’t.

“So, we came in at half-time and said ‘why aren’t we doing this? And we just changed it around and the second half proved it.

“Just tidy up the basics. We were dropping ball, going into tackles, silly things. We stopped doing the silly things and ultimately, it won us in the second half.”