Tennyson on the cusp of a world title shot 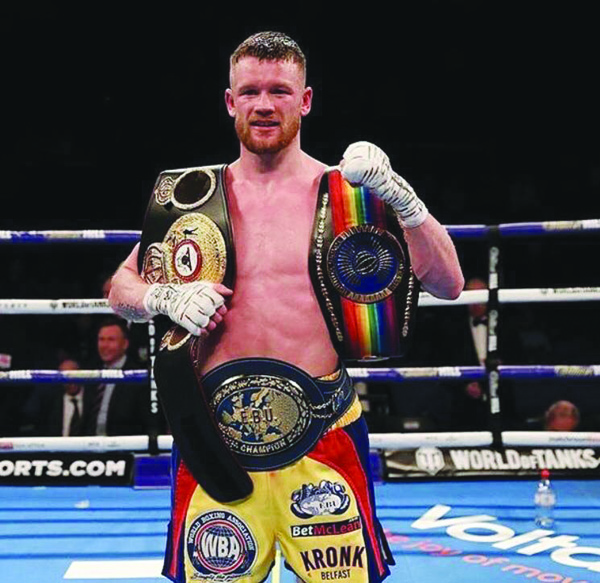 JAMES Tennyson is on the cusp of a world title opportunity after the WBA promoted the Poleglass super-featherweight to number one in their latest rankings.

The 24-year-old added the European and Commonwealth titles to his WBA International belt in London back in May with a stoppage win over Martin J Ward and his winning streak has led him to the top of the WBA rankings.

A shot at world glory will have to wait a little while, however, as first up ‘The Assassin’ will defend his European title against mandatory challenger Samir Ziani of France, with the details of that fight yet to be revealed.

Belfast on Friday, September 21 has been suggested although there is the real possibility, the West Belfast man could fight on the Anthony Joshua v Alexander Povetkin blockbuster at Wembley Stadium on the following night, September 22.

It has been quite the journey for Tennyson, who this week committed his future to manager, Mark Dunlop by penning a new deal with MHD Promotions.

“James Tennyson at 18 unselfishly gave up a glittering amateur career to support his family and chase his dream,” said manager, Mark Dunlop.

“His determination and resilience has been colossal. He never gives up and he deserves every success.”
After a good start to his career that saw him collect the Irish title, Tennyson suffered a shock defeat to Pavel Senkos in a learning fight at the SSE Arena in Belfast on the undercard of Carl Frampton v Jeremy Parodi.

He bounced back and dropped to featherweight where he collected the Celtic title and earned a crack at British champion Ryan Walsh (still champion today), but making the nine stone limit left him drained and he lost out in the fifth.

Tennyson rebuilt again back up at super-featherweight and won the Irish title for a second time with a stoppage win over Declan Geraghty and then added the WBA International title against Ryan Doyle, defending it against Darren Traynor.

This earned him that crack at Ward on the undercard of Tony Bellew v David Haye II at the 02 Arena in London in May and, much like his career, Tennyson was forced to bounce back from an early setback when he was knocked down, but rallied to blast Ward out to claim victory and put himself in pole position for a shot at the world title that could happen before the end of the year should he overcome Ziani next.
“Every young boxer should take note of James Tennyson,” said his trainer, Tony Dunlop.

“What he has achieved the hard way is the mark of a great champion.

“He is 24, an age when many consider going professional. James has the world at his feet. “