The cop, the box of booze and the Biro 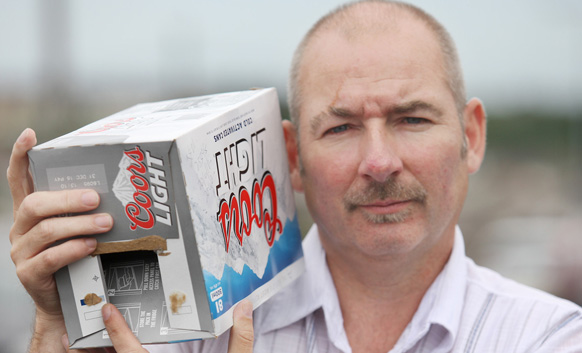 THE PSNI have been accused of unprofessionalism after an officer issued proof of a stop and search on a box of beer.

Political activist Fra Hughes was stopped by police near Ladbrook Drive as he made his way back from a parades meeting in the nearby Houben Centre. Fra asked for official proof of the incident, as he’s entitled to do. When the policeman experienced difficulties with his Blackberry, he wrote the details on a box of beer that Fra was carrying.

“I had gone to the meeting around sectarian parades and called into the off-licence at Ardoyne shops to pick up some beer. As I was making my way down Ladbrook Drive I was stopped by the PSNI and told I was being searched under the Justice and Security Act. After asking for my name, address and date of birth I was searched but he didn’t find anything. I asked for a receipt, which is my right, but the officer told me his Blackberry device wasn’t working and he couldn’t generate a code. I asked him to give me the stop and search details and he said he had nothing to write on. Then he got out a pen and wrote the details on my box of beer.”

Fra, who has contested a number of elections, says he was left astounded by the June 20 incident.

“I consider stop and search powers to be used in Ardoyne for political policing reasons and here we see an officer using the legislation to search me but not being able to fulfil his obligations by giving me a receipt.”

The Greater Ardoyne Residents Collective (GARC) in a freedom of information request obtained figures that showed 4,597 searches were carried out in the Ardoyne and Oldpark areas over a six-year period between January 2009 and January 2015.

Fra says he believes what happened to him is an example of this harassment.

“I shouldn’t have been stopped if they were unable to give me a receipt which is my right. This is just another example of political policing.”

The PSNI said any complaints should be forwarded to the Police Ombudsman.