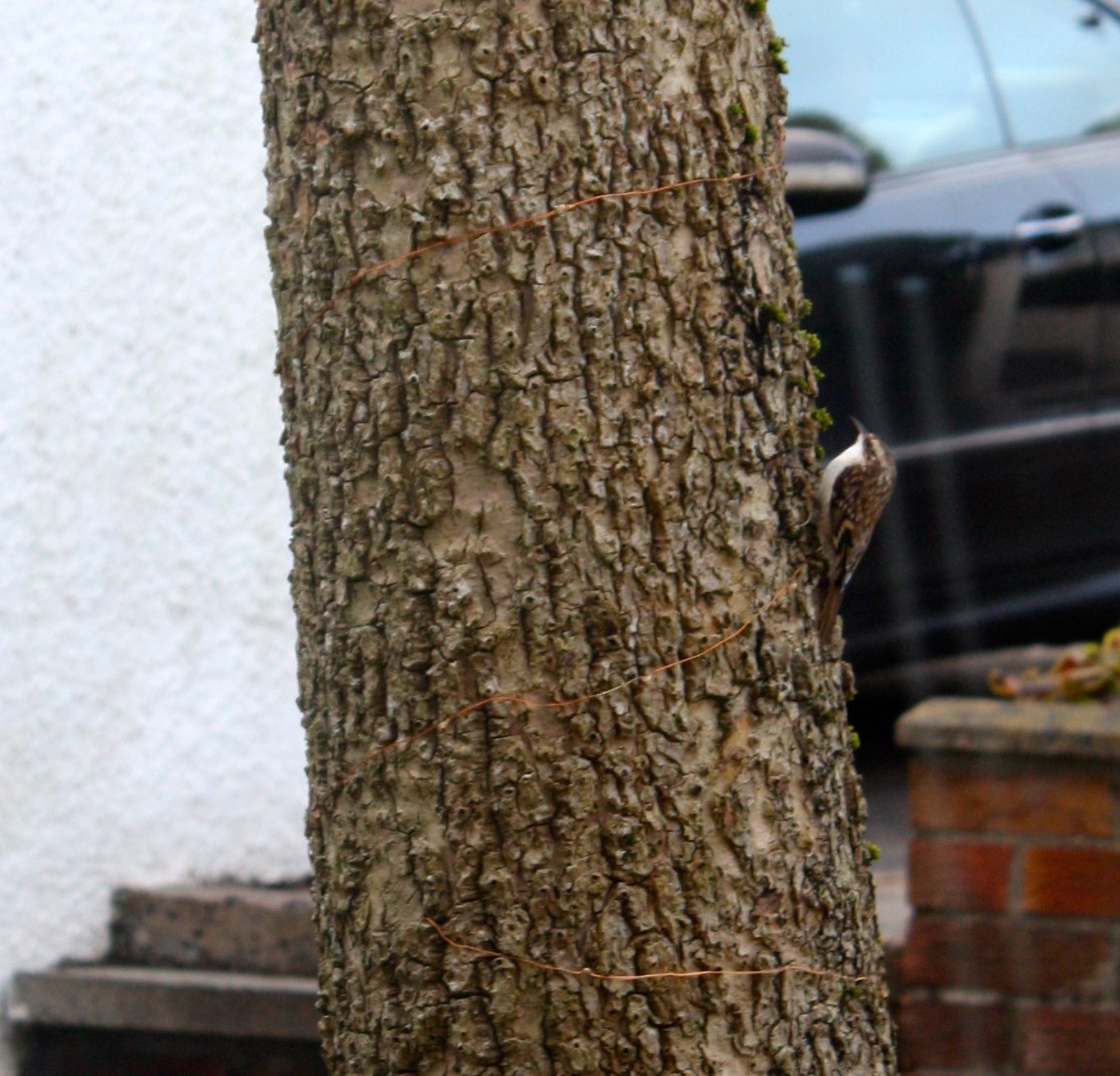 SNAPPED: The treecreeper makes its way up Dúlra’s palm tree trunk outside his window

WHAT will he write about, Dúlra thought yesterday, his fingers hovering over the keyboard. He was just about to start a story about a trip to the lough shore when from the corner of his eye, he noticed something moving at the base of the lone tree on the patio right outside the window.

Was it a mouse? They’re often an unwelcome byproduct of the seeds he scatters for finches every day. It was small and brown all right, but it took just a split second for Dúlra to realise this was something much more special. Because it was actually walking UP the trunk.

Dúlra slowly moved his hand into his pocket and took out his phone. He needed a picture or no one would believe him. He was almost too nervous to work the camera properly, but finally he clicked and he had proof that he was two feet away from one of our most remarkable and specialised birds – a treecreeper.

One of the few benefits of lockdown is that we get more time to see nature outside our doors. Dúlra’s in no doubt that had he been working as normal from the office, he’d never have seen the treecreeper. For all he knows this is an annual visit  – perhaps it comes down from the mountain one day a year to check out the neighbourhood trees.

Truth be told, he’d been thinking of getting rid of the palm tree. We don’t have the proper climate for it to thrive and it’s never a favourite of the birds – it doesn’t even give them any branches to land on – just thick clumps of leaves. A rowan would be much better, he thought.

But nothing in nature is wasted. That bare, thickly-ridged trunk must be a great place for minuscule insects to breed – that’s obviously what attracted this fabulous bird.

Treecreepers, snag in Irish, were the only forest bird of this type to survive the deforestation of Ireland. It was small enough to hide out in a few remote glens while the bigger woodpeckers were driven to extinction. But still today, there are less than 100,000 of them here.

It spends its whole life on the side of trees, always landing at the bottom and making its way to the top.

Dúlra’s bird book says that because of its lifestyle, “rarely are its silvery-white underparts seen”. Unless of course it lands a few feet from your window!

Its visit left Dúlra thrilled. And the palm tree should be happy as well – because it's staying for good!

* Barn owl saviour Ciarán Walsh revealed more great news this week – the owls he had been caring for this summer raised a SECOND brood of chicks.

The birds bred in a box he placed on a tree outside his home near Lough Neagh, where he feeds them nightly by scattering dead chicks and mice along his laneway. The extra food certainly works – in the last few years the owls he feeds have laid more eggs than average and more chicks have been raised to maturity.

The garden nestbox had four chicks this year – but once the chicks grew big, the parents disappeared, only returning occasionally to feed them. Healthy barn owls are known to start their second brood in a different nest before the first nest has been vacated – and that’s what happened here.

It took Ciarán a lot of legwork to finally find their new home – it was on a farm a mile away. He certainly didn’t want to disturb them so he watched them from afar and used a parabolic microphone – a specialist dish microphone for long distances.

“The farmer thought I was nuts,” he said this week, “sitting in his field at midnight listening to owls!” He heard more than one chick calling – so at least another two barn owls – a once common bird across Ireland but are now clinging on from extinction – are right now in the County Antrim skies.

* If you’ve seen photographed anything interesting, or have any nature questions, you can text Dúlra on 07801 414804.