The new era for Frampton begins with Belfast blockbuster 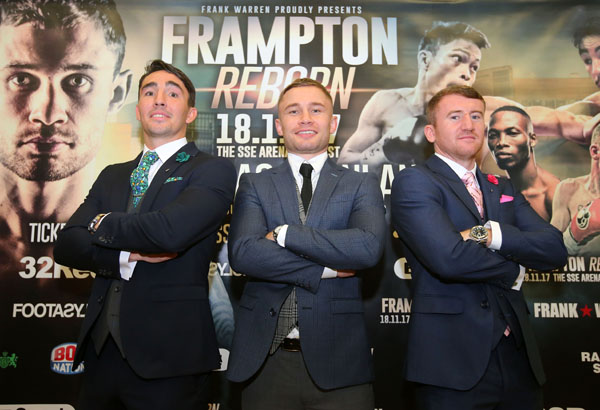 Carl Frampton is joined by Jamie Conlan and Paddy Barnes who will also be in action on November 18 at the SSE Arena Picture by Jonathan Porter/PressEye.com

THE new era for Carl Frampton will begin at the SSE Arena on November 18 when ‘The Jackal’ boxes for the first time with his new team in place.
At a press conference at the Ulster Hall yesterday (Wednesday), the North Belfast man was officially unveiled as a Frank Warren and BT Sport fighter and was flanked by his new trainer, Jamie Moore.
MTK Global will provide a management/advisory role for Frampton as he moves his career forward.
An opponent for the 30 year-old is yet to be confirmed, but the card will include two world title fights with West Belfast’s, Jamie Conlan challenging for the IBF super-flyweight title against the Manny Pacquiao-managed Jerwin Ancjas from the Philipines, while WBO bantamweight champion, Zolani Tete will also defend his title against an opponent to be confirmed.
Frampton’s close friend, Paddy Barnes defends his WBO European title on the night with tickets on sale this Wednesday.
Frampton is delighted to get back in the ring following a nightmarish 2017 to date that saw him lose his WBA featherweight title to Leo Santa Cruz before his comeback fight was shelved due to opponent, Andres Gutierrez slipping in the shower the night before the fight.
“I’m very excited. First of all, it’s great to be back in Belfast,” said Frampton.
“The last fight didn’t happen for whatever reason, but I’m just looking forward to repaying the fans for supporting me.
“It’s good for boxing and good for Belfast, so I’m delighted about that.”
There was a lot of speculation as to who Frampton would sign with since his split with Cyclone, with Warren winning the race ahead of Eddie Hearn.
The deal will see Frampton made the leading light for BT Sport’s boxing coverage and while this was a major factor in Warren securing his signature, there was another.
“What I want to do and I have made it public, the dream of mine is to box in Windsor Park and obviously, you need the right time of year to be able to do that. That would be the end of spring or summertime next year,” he confirmed.
“I know that Frank and MTK will be able help me get that. It’s going to be a huge thing for myself. It’s what I have dreamed of since I was a kid, to box at Windsor and I will finally be able to do that. It’s going to be the highlight of my career. I want to be here as much as possible because there is no atmosphere like it in boxing.”

While no opponent is confirmed for Frampton as yet, the Tigers Bay man says the man in the opposite corner needs to provide a test although he acknowledges stiffer tests lie ahead.
Then plan is to get back on the winning trail before targetting one of the belt holders in 2018 with Lee Selby (IBF), Oscar Valdez (WBO), Gary Russell Jnr (WBC) and familiar foe, Leo Santa Cruz (WBA) all on his radar.
“We only got the deal done not that long ago, so obviously we are just looking at opponents,” he explains.
“At the stage I’m at now, it can’t be a mug. It needs to be a credible opponent, but I’m looking to get the big boys next year.
“I want to put the last year behind me. It has been a disastrous year for myself. I lost my first fight and everything else that has gone on, so I want to get back to winning ways. I just need to get a win, put the last year behind me and move on.”
His training camp in Jamie Moore’s gym in Manchester as already begun, but now with a date to aim at, he can begin going through the gears with just over seven weeks to go.
Getting used to the new regime may take a little time, but Frampton says he has settled in well and for the first time in a long time, is enjoying the sport again.
“My weight is good this far, but it needed to be good after the last time so I’m keeping a close eye on that,” he joked, a nod to missing the weight against Gutierrez by one pound.
“I have started sparring. I did four rounds yesterday (Tuesday) just to get my eye in and was trying things out that we have been working on, so I think that went well too, so I’m in a good position at the minute.”

His new trainer, former Irish champion Moore says he is delighted to work with the two-weight champion and doesn’t plan to drastically alter Frampton’s style.
Instead, he says his job will be to make sure his man is at the peak of his powers each time he steps into the ring and have the right plan in place.
“I have been there and know what it’s like to be a 30 year-old fighter who has picked up injuries, has had to change his training and to slow down,” said Moore.
“He can’t train like a 24 or 25 year-old, he doesn’t need to. At that stage, you are building an engine. By the time you’re 30, the engine’s built. You don’t need to keep pushing and pushing. From what I can gather, he’s been fighting tired yet still performing so can you imagine what he is going to be like when he is fresh, eager and enjoying himself?
“I would be offending Carl Frampton if I try to change him too much. All I need to do is sharpen his tools, get him right fitness-wise and make sure he makes the weight, then set the tactics.”
The new gym has made boxing fun again for Frampton who was almost mapping out his retirement plans a couple of months back, but now he says he is back in love with the sport and could have several more years to come.
While his immediate future remains as a featherweight, he hinted that he has already started considering what a challenge to be a three-weight champion would look like.
“Last year I was constantly talking about the day I will retire, but now I’m enjoying boxing again,” he confirmed.
“I was telling the mrs when I turn 32 I will be out, but the way I’m feeling I could go onto 35. I believe I have another world title in me.

Getting to share the bill with his friends is an added plus for Frampton who looked a man happy within himself on Wednesday and says he is thrilled to be sharing the bill with friends in Barnes and Conlan who he is confident can both raise world title belts.
“Paddy is one of my best mates and me and Jamie are good friends too,” he said.
“Jamie Conlan has been involved in three or four of the most exciting fights I have ever seen. He’s a tremendous fighter with an all-action style. He never makes things easy for himself, goes to war every time and that makes him one of the most exciting fighters in the country.
“To be sharing a bill with him and him fighting for world title is great. Obviously, with Paddy defending his WBO European championship of the world. Paddy is really talented and is just starting off as a pro, but in my eyes, he isn’t too far away from fighting for major titles and one day he will be fighting for world titles.”