The truth, the hole truth and nothing but the, ah, truth 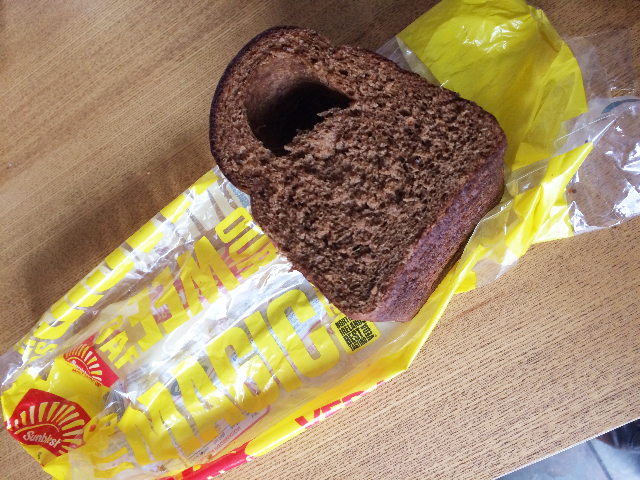 HAVE a look at this thing here on the right. Squinter bought it in Tesco Newtownbreda last week on his way home from Downpatrick (as ever, don’t ask).

A long day it had been and Squinter got it into his head that when he got home he’d like nothing better than a bit of mature cheddar melted on toasted Veda with a big mug of tea. It wasn’t that he was particularly hungry – had that been the case he’d have stopped off for an Indian or a fish supper. No, it was the comfort aspect that appealed to him most; the idea of the food and its homely evocations, rather than its calorific value.

Unfortunately, when he placed the loaf on the cutting board in the kitchen and set to work, this is what he found. Doesn’t look great, does it? But if you think it looks bad, you want to try cutting it with a bread knife. You’d have as much success using a rolling pin. Squinter gave up after a while and had yer bog standard cheese on toast, which was okay, but it wasn’t Veda. And neither, when you come to think of it, was this thing.

‘Our Wee Loaf,’ Sunblest describes this as on the bright and chirpy wrapper. ‘Magic,’ they call it, alongside a number of other toe-curling tea-towel Noel ’n’ Alan inanities. Well, if that’s Our Wee Loaf and if that’s Magic then Squinter fears that Sunblest urgently needs an Ulster-Scots dictionary.

Squinter has no idea what has gone wrong here, but according to Professor Google, holes in bread are most likely caused by air bubbles in dough that hasn’t been sufficiently kneaded. If that’s the case then Sunblest need to get a new kneading machine, as does just about every bakery in Belfast that sells baps, because the story of the demise of the Belfast bap is an equally sorry tale.

Squinter remembers fondly the long-ago, halcyon days when it was possible to slice a bap with a bread knife, and he even recalls a time when it was possible to butter a bap without the thing coming to bits in your hand. Even in this day of easy-spread butter and butter substitutes, it’s a rare day indeed when you stumble across a bap that is capable of succumbing to your will.

What’s to be done? A Bread Ombudsman, perhaps? A Bap Tsar, a Veda Commissioner?

Squinter will get the new Secretary of State James Brokenshire on to it. Ulster deserves no less.