SQUINTER: This new lockdown’s a bit of a gamble 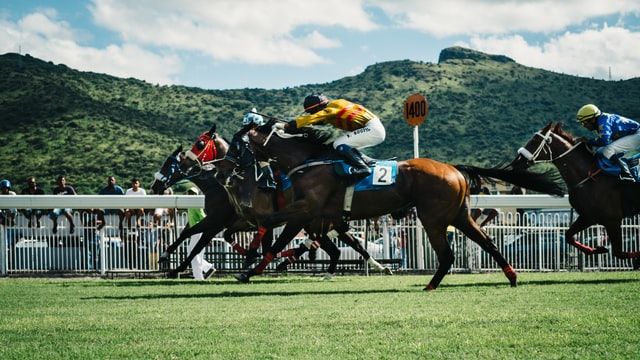 FAR-FUNG FINAL FURLONG? Any port in a Covid storm for gamblers: Horse-racing in Port Louis, Mauritius, Julia Joppien on unsplash.com

WE’RE all only too aware that the need to act quickly and decisively means that any decision the Executive takes in relation to Covid is going to  be open to criticism, to say the very least.

The month-long circuit-breaker that we’re nearly three-quarters of the way through is a perfect example. Why can we do this and not do that? Why can we go here and not there?

Squinter has tended to refrain from such toing and froing because the truth of the matter is that there are no good decisions to be made when it comes to ordering a lockdown – only decisions that are less bad than others. But he’s been constantly scratching his head in recent weeks and asking himself a question which he simply has to put to you here today: why on earth are the bookies still open?

Cards on the table, here. Even though Squinter has absolutely no idea why bookies are happily trading away, as a lifelong punter he’s been gambling away too. Squinter doesn’t have an online account, mostly because he’s worried how his weekly spend would be affected if he could bet at the tap of a screen rather than having to walk or drive to the bookies, and so he bets only in bookies shops. But even as he scans the screens and reads the coupons and works the machines, he’s aware that there’s nothing in a bookies shop that makes it any safer than any other business.

Mask compliance is pretty high (probably around 90 per cent), and there’s plenty of hand cleanser about, which Squinter religiously avails of, but even so, it’s a poser. Pens, coupons, touch screens, counters, the rush to the tills before a race starts, the coins and the notes, the buttons on the card machine: not an environment that is in any way unhospitable to the virus or in any way safer than a pub or a club. Yet on we bet.

Funnily enough, the past three weeks have seen Squinter stay ahead of the bookies for the first time in quite a while, although with the pubs and clubs shut his options for spending his winnings have been seriously curtailed.

Attention turns now to whether the lockdown will end after a month, as we’ve been told it will. That question arises because it appears that there is a looming split between the DUP and Sinn Féin on the matter, with the DUP keen to throw things back open and Sinn Féin watching things with an exceedingly cautious eye. In an impassioned speech in the House of Commons on Monday, East Antrim MP Sammy Wilson – a vocal opponent of lockdown, masks and keeping quiet – railed against the new lockdown in England. This was encouraging, because he and six of his colleagues didn’t think England was part  of their remit just two weeks ago when they abstained in a vote to feed hungry children over the Halloween half-term break. Seemingly, the disparate regions of our Precious Union® are only allowed to care for their own kids.

We’ve reached a pretty pass when an MP can stand up in the Mother of Parliaments® and have a go at, um, data. There are plenty of people and things that Sammy could legitimately criticise about the Tories’ catastrophic handling of the virus. Why he felt the need to launch an attack on the information that illustrate the depth of the mess is not entirely clear, to be honest.

Lockdowns do not work in the long term & they are also anti-everything conservatives stand for because they impose unthinkable state intervention, are wasteful in terms of the use of taxpayers’ money and destroy our basic freedoms.

What next? An assault on statistics. A campaign against science? (No, scrub that – the DUP do that already.) A stern letter to the papers about the census? Questions in the House about whether it’s really six miles from Bangor to Donaghadee?

Ah, but it’s Sammy, Squinter hears you all cry in unison. And there’s something to that. The gravitas that Sammy lost all those years ago running about in the nip on the front of a Sunday paper has never really been recovered. And he’s even been replaced as the funny man at DUP conferences by... Gregory Campbell, who’s about as funny as a fire in a pet shop. And we’ve got the data to back that up.

NEW BBC Director Tim Davie has made his maiden speech, as it were. The first decisive move by a new DG is always watched anxiously by staff at the Beeb as it’s a good indicator of the direction their jobs and their prospects are likely to take over the coming years.

And what’s the big takeaway from his first statement of intent? What’s likely to be the ‘direction of travel’, as too many of his journalists like to say?

Did he say he was determined to rebuild the news division’s reputation after a catastrophic few years when its credibility has taken a serious hit? Has he invoked the Reithian spirit and copperfastened Auntie’s commitment to inform, educate and entertain? Did he pledge to move the BBC away from joining the commercial stations in a race to the reality TV show bottom?

Perhaps a quick explainer is in order to keep anybody unfamiliar with the term in the looop. The first thing you need to know about the phrase before we try to define it is that it was a product of the alt-right in the United States and has latterly been adopted by the new British right – or perhaps the new English right is a more accurate way of putting it.

Essentially, virtue signalling means being nice. But it’s put in an accusatory way so that being nice appears to be somehow a bad thing. Think ‘do-gooders’, for instance (against whom Boris Johnson and Priti Patel both came out against recently). Or the ‘woke’. Both nasty terms for decent people trying to do the right thing.

So clearly, if you’re not very nice you can’t get into a nice competition with nice people because you’re gonna lose very badly. And so you don’t do it. What you do instead is you make up insults for nice people so that people who aren’t very bright will get confused. And as not-very-bright people are the voters who gave us Brexit and the Tories, the tactic seems to be working very well, thank you very much.

All of this we’ve known for some time. But for the new DG to adopt the language of the English right in his first act of significance should be enough to set the alarm bells ringing in the minds of anyone whose main interests in life are not Spitfires and Tommy Robinson.

In terms of what the ban on virtue signalling means in reality for BBC staff, they are not allowed to display support on screen or online for causes, even though those causes might by worthy.  Gay rights, for instance. You won’t be seeing your regional teatime newsreader swanning up Royal Avenue waving a Pride flag and singing songs from the shows. You won’t see or hear them supporting anything, in fact, that could be construed as, well... nice. Even though the virtue signalling is in no dictionary of phraseology and is a deliberately hazy and ill-defined concept designed to achieve a political end. And a right-wing political end at that.

Love how the new director general is creating a new forward thinking, inclusive, diverse boardroom at the BBC pic.twitter.com/I8OOr4Qq0y

Needless to say, the poppy appeal is exempt. You might say that financially supporting a charity and sticking a massive big red flower in your lapel is as big a virtue signal as it’s possible to make, but it’s not. Because of course the truth is that virtue signalling does not have a hard and fast definition. It means whatever the person saying it wants it to mean. And in this case it’s the Director General of the BBC. And he has decided that wearing a big flower in your breast is not in the virtue signalling bracket.

And so does that mean that the act of not wearing a poppy – as increasing numbers of BBC staff are wont to choose  these days, especially on BBC the Pravince – is virtue signalling? It’s the logical outworking of the policy. Orwell for the digital age, you might say.


Should we help ourselves to help others?

SINN Féin’s John O’Dowd says he wants to see self-service points at supermarkets phased out in order to protect jobs.

Well-meaning and laudable though this is, and much as we’re all in favour of jobs, you have to think that John is rather playing the role of King Canute here.

The self-service sections are there and they’re busy; meanwhile at the shrinking number of tills with actual workers, the staff are increasingly left idle and bored.

Squinter’s an old-fashioned kind of guy. (When he used to use that phrase it was to indicate that he did things that were somehow not in fitting with his actual age. But now he uses it because he’s literally getting old. Oh, well.) He likes staff to do the beeping for him, although he’s more than happy to do his own bagging. He’s better with the self-service now when he uses it, but there’s still always something comes up.

• To proceed, please place your items in the bagging area.
(Look, there are two flippin’ silver shelves here and neither is marked bagging area.)
• Please seek verification for this purchase.
(The nearest member of staff is thirty feet away talking to a colleague about Strictly and the screen is saying it’s about to time out.)
• Is customer verifiably over-21?
(He’s finally arrived and he’s looking at Squinter as if he’s wondering whether the screen means years or stone.)
• Amount is over the contactless limit, please insert card and enter pin.
(The bloke wearing shorts even though he has a tag on his ankle is waiting his turn and starting to get impatient.)
• Please press bell for a member of staff.
(Now Tag Boy’s pushing his WKD closer to get in Squinter’s face.)

On a connected matter, Squinter doesn’t clean his table after him at KFC, McDonald’s, Subway or Burger King for exactly the same reason that John wants self-service tills scrapped: it should be somebody’s job. Nope, you’re a lazy, thoughtless ballix, Squinter’s heard it said, and while he’s not denying that charge in its generality, he must protest in this instance as lifting your tray and emptying it into a huge big bucket is not exactly an imposition. Add to that the fact that if the person before you has cleared the table it’s unlikely to have been wiped clean, you could also call Squinter’s one-man drive to cut the jobless figures a public service, as sprayed and wiped tables are a big plus in the time of Covid.

Squinter must contact John and flag up the KFC table thing as a more winnable employment battle than self-service tills. Job’s a good ‘un.