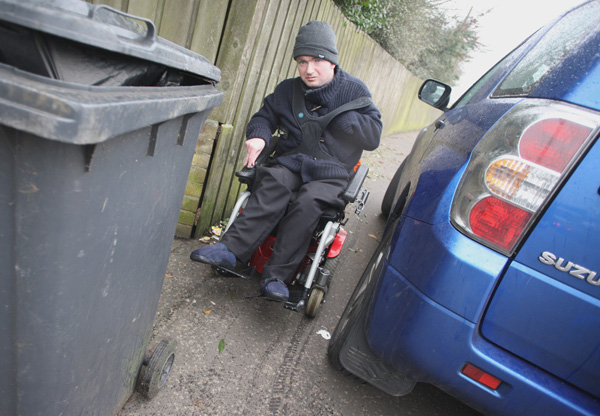 EXTRA parking restrictions are to be implemented on the Hightown Road in Glengormley after complaints that inconsiderate drivers are forcing wheelchair users off the footpath.

Last week Hightown man Martin McGurk, who has cerebral palsy, spoke of how he had to take a half-mile detour to get home in the evenings because drivers are parking on the footpath at the bottom of the Hightown Road.

Now the Department of Infrastructure has announced plans are under way to extend parking restrictions to prevent illegal parking.

“Legislation is currently being finalised to allow for an extension to the existing waiting restrictions on Hightown Road near its junction with A6 Antrim Road,” said a spokeswoman.

“This will involve the provision of a single yellow line which will prevent vehicles parking between the hours of 8am to 6pm Monday to Saturday.”

Last week, Martin explained how the parking was affecting him in his everyday life.

“Every time I try and get past cars blocking the footpath I can’t get through and I have to go up through Farmley and end up blocking the traffic on the Farmley Road because I can’t get up the pavements,” he said.

“It’s either that or block the traffic on the Hightown Road, but it’s much busier there and very dangerous.”